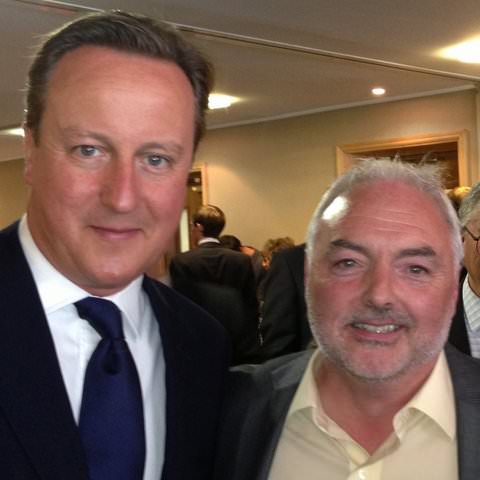 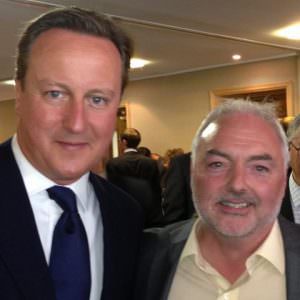 A leading Tory businessman, conservative party donor and new Business for Scotland Advisory Board member Laurie Clark met the Prime Minister and told him why he will be voting Yes in the forthcoming independence referendum.

“I appreciated the invitation to meet David Cameron and the opportunity to tell him why independence is the right option for Scotland and the UK”.

Mr Clark, a long term card-carrying member of the Conservative Party, is an Advisory Board member of the pro-independence business network and think tank Business for Scotland. He was invited to meet Mr Cameron on Wednesday August 14th at a private reception along with other donors and party members.

The latest of many prominent business people to come out for independence, Mr Clark said:

“For me, a Yes vote represents the end of an unfair union but the beginning of a fairer and mutually beneficial partnership between Scotland and the rest of the UK.” He went on to say:

“Independence represents the best of both worlds whereby we maintain many of the unions between Scotland and the rest of the UK, including the union of the crowns and the trade union but lose the out of date political union”.

“The referendum next year is a not a choice between Scottish and British identity. Instead, for me, it is about how best we realise the potential of Scotland, create wealth and jobs, expand the private sector and reform the public sector in the interests of the nation as a whole with Scottish solutions for our distinctive challenges and opportunities. To do that we need the Scottish Government to be in possession of all the appropriate economic powers and levers.”

Laurie believes that “the Tory-led No Campaign is held back by the fact that Conservative values in Scotland are different to those promoted from London”.

“The future of free-market voices in Scottish public life is best served by the formation of a new party after independence we can be progressive and Conservative rather than conservative and Unionist. There is a natural electoral base for right-of-centre perspectives in Scotland but an unbalanced political discourse which, no matter where you are on the political spectrum, is unhealthy for the future direction of Scotland”.

“Of course, as the newly formed Business for Scotland advocates, fairness and prosperity are two sides of the same coin. We cannot address Scotland’s social problems without the tax revenues from a growing and profitable private sector. A scotland that offers an abundance of entrepreneurial and growth opportunities is one that can afford to create a society where  No-one gets left behind”.

“Independence allows us the opportunity to start with a blank sheet of paper. We could and should be attracting much more substantial business, investment and jobs with fiscal solutions and broader public policy tailored to the distinctive Scottish economic environment”.

“I simply don’t believe Scotland will become some sort of socialist dominion after a Yes vote. In actual fact, I think it is much more likely to strike a healthy balance between, on the one hand, the need to stimulate private sector and economic growth and, on the other hand, the need to care for those in need, address inequality and boost productivity”.

Laurie’s intervention was covered in several national newspapers. The Scotsman provided a balanced and intelligent piece, the Telegraph was in full defence mode and carries the bizarre statement from an unnamed Conservative Party spokesperson that it was a “contrived Yes stunt” – possibly the same party official who invited Laurie to attend the VIP gathering given his history of party activism and financial support. The Herald has a balanced piece focussing on Laurie’s claims that independence could see a relaunched and progressive thinking Conservative party become more relevant in Scottish politics.

The Tory No Campaign response also carried the usual scare stories and the completely wrong statement that Scottish business supports the Union – In fact, according to the latest independent survey, the majority of business is in favour of a YES vote and want a new partnership across the British Isles.

Business for Scotland does not advocate support for any political party and, as it happens, our Advisory and Executive Boards contain members and supporters of all the major political parties and those of none.

Laurie Clark is a well known businessman and inventor. His considered contribution to this debate is particularly welcome as we approach a year to go before the referendum.