BOTH sides are claiming victory in the Scotland Bill fiscal agreement negotiations – and there will be much debate about who got more of what they wanted. But I cannot help feel it is the Scottish people who have lost out due to Westminster’s less than halfhearted commitment to the devolution they promised.

On one hand we have the Daily Record claiming John Swinney and Nicola Sturgeon are “the only political partnership in history to take on the UK Treasury and win”, and that it is a great victory for Scotland. In fact the victory they have won is that they have stopped the Westminster Government attaching a stealth cut to Scotland’s budget on the back of the underwhelming powers contained in the Scotland Bill.

Any victory over the Treasury’s cuts agenda should be congratulated and it is clear the UK Government saw an opportunity to cut Scotland’s budget through the fiscal framework. How two-faced is that when you consider a core sentence from The Vow: “because of the continuation of the Barnett allocation for resources and the powers of the Scottish Parliament to raise revenue we can state categorically that the final say on how much is spent on the NHS will be a matter for the Scottish Parliament”, unless you plan to cut Scotland’s budget and it is cut by £7 billion as part of this deal.

In September 2014 the media was desperate to suggest devo max was on offer. The Daily Record claimed Gordon Brown was the architect of The Vow and that “Nicola Sturgeon had vowed to back Gordon’s call for devo max if it is a No vote”. The Guardian said The Vow reiterated extensive new “devo max” powers for the Scottish Parliament that would follow on from a No vote. Sky said “David Cameron has pledged new powers for Scotland that some have said amount to devo max” and The Spectator complained that “this was the first time he (Cameron) has been so definitive about backing a devo plus or a devo max”.

Way before the referendum the House of Lords stated any offer of devo max would be unconstitutional stating: “Whereas both the UK Government and the Scottish Government have recognised that independence is a Scottish question, devolution max is not. Proper constitutional process requires that negotiations involving all parts of the United Kingdom precede any referendum on an agreed scheme of devolution max.” 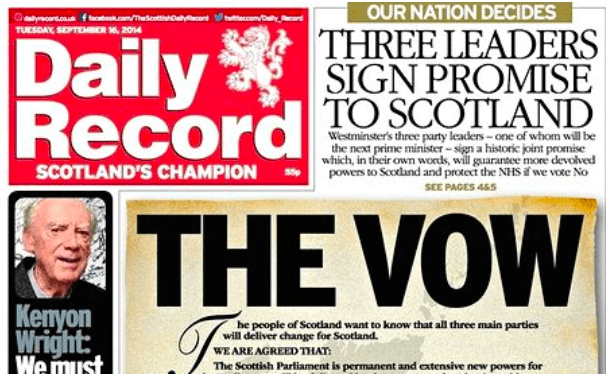 In other words they believe that there needs to be a whole UK referendum on devo max, and English voters, the House of Lords and Commons have the power to veto. The Scotland Bill now has a third reading in the Lords. They could still block it if they do not like the fiscal agreement but they will not block it for having too many powers — peace it doesn’t.

People on both sides of the independence debate must admit that there is a strong majority in Scotland for devo-max powers for the Scottish Parliament. Poll after poll has shown that to be the case but the UK Government insisted that there be no devo-max option the 2014 ballot paper.

How supporters of devolution feel about the Scotland Bill will define Scotland’s constitutional future. Research compiled by Ashcroft on why Scotland voted No found that 25 per cent of No voters selected “A No vote would still mean extra powers for the Scottish Parliament together with the security of remaining part of the UK, giving the best of both worlds” as their main reason for voting No.

The famed Vow was only one of many promises of more powers during a long campaign. However, it has become a phrase used to encapsulate all of those more-powers promises. So when research by YouGov found that only nine per cent of Scots believe that the Vow was being delivered by the proposed Scotland Bill, it begs the question who really benefits politically from the deal that allows the Bill to progress?

THE Tories will proclaim The Vow has been delivered and Ruth Davidson will campaign on two key messages, firstly that only the Tories stand up for the Union, and secondly that she will challenge the SNP to say what they will do with the extensive new powers now that Scotland is the most powerful devolved parliament in the world.  She knows that the most powerful parliament claim does not stand up to scrutiny, but she also knows that the powers are a trap.

Labour blundered into the powers trap meant for the SNP, proving just how unusable the proposed powers will be

Labour, despite the fact that the powers trap was meant for the SNP, blundered in and demonstrated the limited nature of the proposed tax powers with an entirely muddled and unworkable 1p tax-rise plan. Labour provided a clear case study on how the proposed powers are largely unusable window dressing – but maybe the SNP have a way through.

Leaving the powers unused and claiming they are unusable is a risky tactic. But using the powers is also risky – risky because people who hoped for more powers and voted No, that crucial 15 per cent to 20 per cent of current union supporters, are often middle class, university educated, salaried and very wary of tax rises and of left-wing policies in general.

Ruth Davidson will want the SNP to raise income tax — she wants them to alienate the SNP voters who voted No. The SNP might be able to use the tax powers if they simultaneously completely revamped the council tax system so that more revenue was raised but the overall tax situation was progressive.

We all know the borders seats are problematic for independence. However some polls suggest in parts of Scotland up to 20 per cent of regular SNP voters voted No in 2014.  Look at some of the biggest No vote areas where the SNP usually romps home, in Aberdeenshire (60.3 per cent No) and Perth and Kinross (60.1 per cent No). In Angus, where the SNP holds both Westminster and Holyrood seats, only 44 per cent voted Yes. Moray, which also returns an SNP MP, said 59 per cent No.

The left put on a great show – and they voted Yes in big numbers. But most Scots sit either slightly left or slightly right of centre, as do the majority of SNP voters, and they were frightened of a vision of a true socialist left-wing Scotland. The only way to convince the non-left on independence is to publish a forward-thinking, creative, progressive and fully costed roadmap to greater economic prosperity and a fairer, more environmentally sustainable, independent Scotland.

If the SNP does not grasp that thistle and promote the benefits of independence more consistently, even the growing disappointment with limited devolution, increasing disillusionment with Westminster and even a forced Brexit will not alone guarantee independence within a decade.