The biggest entrepreneurship event ever to place in Europe, with over 200 events taking place over the continent, Start up Europe Week, is coming to Glasgow.

From 1st-5th February volunteers are collaborating to provide meet-ups, conferences and workshops from Amsterdam to Zurich. Scottish entrepreneurs can get a slice of the action on Wednesday 3rd February 6.00-8.00pm at the Glasgow’s Start Up Ecosystem event at the Orkney Street Enterprise Cells in Govan.

This free networking event will see representatives from some of the city’s start up support agencies presenting how they can help make your business a success. Budding entrepreneurs can also enter a pitching competition to present their business ideas to these key influencers with the winner snapping up 2 months free office space.

Further details on the event.

The news is a major appointment for the company, which works with 96% of Scotland’s local authorities and has recently been appointed as ‘preferred bidder’ on the £700m Clyde Valley Residual Waste Partnership.  The post of Scottish Regional Managing Director will play a key role in the development of the Scottish business, transforming Scottish Government zero waste policy into practice.

“This is an exciting time to be joining Viridor at the forefront of creating a more resource-efficient and sustainable UK, and I’m delighted to be leading efforts to realise Viridor’s vision for Scotland.  By working with the team, clients, Scottish Government, and local communities, we will do our best to ensure a greener and more circular economy for the country.” 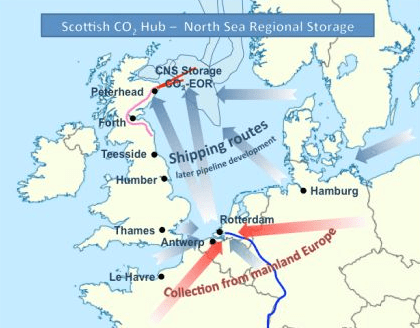 The Scottish Carbon Capture & Storage project has called for the creation of a Scottish CO2 Hub to tackle Europe’s greenhouse gas emissions.

This would provide a step-wise, affordable route to creating a Carbon Capture and Storage (CCS) industry in the UK and EU using existing infrastructure, established shipping technologies and well-characterised storage assets in the Central North Sea.

By the early 2020s this project could achieve a key milestone in the deployment of CCS – the establishment of commercial storage operations in the North Sea – with a whole new industry following from that.

More on the Scottish CO2 Hub.

Scottish startups shared over £100,000 in prizes at the Entrepreneuring Awards last Wednesday (20 Jan).

Run by Entrepreneurial Spark and supported by partners Royal Bank of Scotland and KPMG, the awards offer cash prizes aimed at helping early stage businesses to get off the ground and grow.

Winners included Blind Spot Gear, The Little Art School and UK Gift Box, each winning Entrepreneur of the Moment in the Glasgow, Ayrshire and Edinburgh Hatcheries and £10,000 prize money.

Entrepreneurial Spark is the world’s largest free accelerator for start-up and scale-up businesses, to find your nearest Hatchery and register interest for the August 2016 more info can be found here.

A new oil and gas report by DNV GL ‘A New Reality: the outlook for the oil and gas industry in 2016’ published on Monday (25 Jan) reveals that UK job cuts are accelerating in 2016 despite rising concerns about skill shortages.

Investments in CAPEX, OPEX and R&D are expected to be cut even further in the UK in 2016, deeper than at a global level.  A decreasing headcount this year is also expected by 58% of UK respondents compared to 51% globally. However, increased spending on improving the efficiency of assets in operation is expected by 39% of those surveyed.

The research shows that the downturn is leading to more joint industry projects and this year 22% of UK sector professionals expect their company to collaborate with other firms to deliver cost savings. Increased collaboration is expected by 46% of respondents to be the most prioritised strategy for maintaining innovation.

Subsea (39%) and EOR (28%) are envisaged to be the highest impact new/emerging technologies, followed by unconventional oil extraction (25%). However, 42% of respondents expect spending on R&D and innovation to be cut even further in 2016; 6 percentage points more than at a global level.

Small business are to benefit as extra funding is approved for Investors in Young People (IIYP)  for businesses that sign up to the IIYP accreditation.

Since the accreditation launched in July 2014, over 150 employers employing 250 people or less have already benefited from funding which is available from the Scottish Government.

IIYP is the country’s only people management award focusing on employers’ recruitment and retention of young people, bringing with it advice, recommendations and best practice regarding the recruitment, employment and training of young workers.