Dalzell mill in Motherwell and the Clydebridge plant in Cambuslang were shut down by Tata Steel last year with the loss of 270 jobs.

However, they were later saved from closure when they were bought by metals group Liberty House in a deal brokered by the Scottish Government, who bought the plants from Tata before immediately selling them on to Liberty House.

The firm plans to resume steel production at the Motherwell site next month using the existing 60 staff plus 40 more new recruits, many from among the former Tata Steel staff. Liberty Steel said the plate-rolling mill had taken delivery of about 1,500 tonnes of slab steel from British Steel in Scunthorpe in preparation to start steel plate production.

Story from The National.

The Scottish government has retained its status as the only government in the world to hold the certification. The Carbon Trust Triple Standard recognises efforts to tackle carbon emissions, water use and waste levels.

The Carbon Trust confirmed that Scotland “is directly contributing to achieving sustainability ambitions it has set for the country by delivering year-on-year reductions in carbon emissions, water use and waste from its own operations”.

The government’s environmental management team has a target to reduce carbon emissions by 30 per cent by 2020, based on a 2009/10 baseline.

First Minister to host Q&A with EU nationals in Scotland

Around 450 people from 24 different countries are expected to attend today’s event in Edinburgh for a public Q&A event between the First Minister and EU citizens living in the UK.

It comes after Theresa May’s government had refused to guarantee the rights of EU migrants residing in post-Brexit Britain, saying it first wanted to safeguard the position of British expats living in the EU.

The First Minister is attempting to strike a different tone on announcing the Q&A event. She said EU migrants were “very welcome” and had brought a wealth of social, economic and cultural benefits to Scotland.

The event at the Edinburgh Corn Exchange comes as Sturgeon and her cabinet continue to explore whether Scotland could remain part of the EU after the UK triggers Article 50 and leaves. She has already travelled to Brussels to meet EU officials and visited Berlin where she spoke with German ministers.

Boost for Scotland thanks to whisky distillery tourism

A record 16 million tourists visited Scotland’s whisky distilleries, contributing a total of £50m to Scotland’s economy. Around half of Scotland’s 118 whisky distilleries are open to the public and the SWA’s survey found tourists spend an average £25 per head per visit. Total spend at distillery visitor centres in 2015 was £50 million, up from £27 million in 2010.

Distilleries reported that the largest proportion of visitors came from Scotland and other parts of the UK, Germany, the US and France – reflecting some of the largest markets for Scotch around the world.

Scotch Whisky Association deputy chief executive  Julie Hesketh-Laird said:  “Scotch Whisky distilleries offer high-quality and unique opportunities to visit the homes of some of Scotland’s most famous brands. It is testament to Scotch whisky companies that visits have increased at a time when overall Scottish visitor numbers fell.

“This brings important benefits to the wider rural economy, as distillery visitors will also then be staying at the local B&B, visiting a local pub or cafe, or buying souvenirs of their stay in Scotland.” 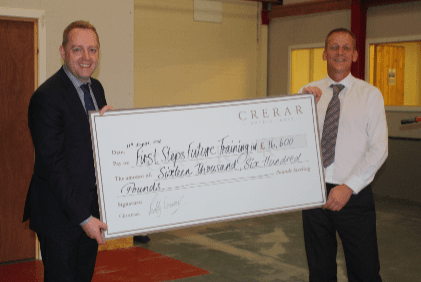 Crerar Hotels Trust has thrown its support behind First Steps Future Training who help provide care and support to learners and encourage ambition and independence. A £16,600 donation was made to the charity which will fund practical training and assist employment prospects for young people and adults within Glasgow and South Lanarkshire.

The aim of First Steps as a training provider is based on passion not profit. Seeking to deliver a steeping stone for their learners who live within areas of high unemployment, deprivation, addiction and social exclusion.

First Steps Future Training are one of over 70 charities to receive funding from Crerar Hotels Trust in the past year alone. The trust, chaired by Paddy Crerar, is tasked with the distribution of more than half of the hotel group’s distributable profits to charities, community projects and good causes that have links to where Crerar Hotels are located or have interests.

The event will start at 6:30pm and some of our members will be giving a short introduction to their businesses on the night.

Drinks and refreshments will be provided.