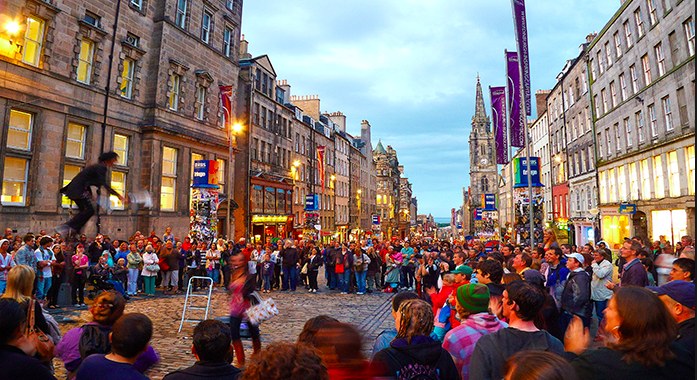 A record attendance at the Edinburgh Festival Fringe has been a huge boost to local retailers, with a increase on last years retail spending of 6%.

Data from retail point-of-sale software firm Vend also shows a 13% increase in the number of sales put through by each retailer in August, compared to the three months prior.

The biggest spending days were 3 and 26 August, as people flooded into the city for the start of the Festival, and to catch the final acts.

The tidal flows between the Atlantic and the North Sea, in the Pentland Firth between mainland Scotland and Orkney, could potentially power nearly half of Scotland’s entire electricity needs, according to a study by engineers from Oxford and Edinburgh universities.

In an update on the progress of the MeyGen project, by Atlantis Resources, the company said it had generated 700 megawatt-hours of electricity in August, a world record amount.

Scotland has been voted “the most beautiful country in the world” by readers of Rough Guide, beating Canada to the number one slot in the top 20 countries.

In its listing, which also includes New Zealand, Finland, Norway and South Africa, the guide states: “And finally, the world’s most beautiful country is revealed: “Scotland. Who can deny that these wild beaches, deep lochs and craggy castles are some of the most wonderful and beautiful sights in the world?”

Yesterday’s announcement on the Scottish Government’s Programme for Government included some expected announcements, but a couple of surprises too.
We knew about the scrapping of the one per cent pay cap for public sector workers and proposals to phase out petrol and diesel cars in the next 15 years, but FM Nicola Sturgeon raised the prospect of a universal basic income, saying the Government would work with interested councils to investigate further the possibility of paying every person in Scotland a regular, unconditional sum of money.
There was also the announcement of a Scottish National Investment Bank, to take a “new approach” on capital investment.

To help tackle inequality, she announced proposals for a new £50 million fund for addressing child poverty, with the money to be available over five years. In an attempt to tackle “period poverty”, where some low-income women can struggle to afford sanitary protection, Sturgeon said the Scottish Government would provide free access to such products for students in schools, colleges and universities, further to a pilot scheme in Aberdeen.

On the possibility of another vote on the constitution, the SNP leader would only say her government would “consider again the issue of a referendum on independence when the terms of Brexit are clear”.