Milton Friedman: in favour of cutting taxes at any time, for any reason whenever possible

I have never fully understood why almost every Chancellor in my lifetime was singularly focused on tax cuts as a driver for economic growth. The idea comes from the father of neo-liberalism or if you prefer neo-classical economics Milton Friedman who said: “I am in favour of cutting taxes under any circumstances and for any excuse, for any reason, whenever it’s possible.”

Its true, if you have too much tax across the board then it can lower profitability thus slowing private sector investment and create a lag on growth. Cutting taxes in an economy overburdened with taxation, especially where interest rates are high and borrowing expensive will stimulate investment and as long as the Government has cash surpluses to draw from then welfare spending doesn’t need to be cut as a result.

The problem is that isn’t today’s reality, the UK Government has no reserves, in fact a massive sovereign debt, albeit massaged downwards by the biggest public asset sell off in history, over £35bn already and a deficit that remains unsustainably high.

On top of this the impact of Brexit (when it happens) will dent private sector investment even with interest rates so low. Consumers are so laden with personal debt that any consumer spending growth shown this Christmas period will be borrowed at credit card / store card rates of interest meaning any hope of maintaining consumer led growth over the next few years is just wishful thinking, are we back at 2007 again? Against this gloomy economic picture cutting taxes will not stimulate the economy significantly and cuts in taxation revenue will therefore directly impact on front line services.

On the other hand Keynesian economic theory suggests that, when private sector investment dries up that public sector investment can take the strain and stimulate growth. Hard to do if you have a massive debt and ongoing deficit and to be frank the UK Government has so few shovel ready projects to invest in that it would take years for any benefit to flow through to the economy. Against this background first Osborne, and now Hammond, have turned to the only trick they can perform and have announced a cut in corporation tax from 20 per cent to 17 per cent. They think this will make businesses more competitive and simulate investment but for the reasons listed above it won’t be effective this time round.

Hammond: cutting corporation tax from 20% to 17%

During the Smith Commission we were told corporation tax couldn’t be devolved to Scotland, even though it was then instantly devolved to Northern Ireland. Business for Scotland has always said that corporation tax cuts could work but only as part of a suite of flexible taxation powers and policies. For taxation policy to be effective it requires a wide range of interconnected tax powers or you place the weight of taxation too heavily on one group of taxpayers and unbalance your economy. A balanced approach to taxation can however be achieved with forward thinking and creative policies that can meet the aspirations of both the left and right of the traditional spectrum.

For example: the Scottish Government’s Business Pledge is inspirational, I would say that though as it largely mirrors Business for Scotland goals statement that predates it by 12 months. The pledge asks companies to behave in a way that benefits the company and wider society by changing corporate behaviours in a way that will help grow our economy. Inspirational but sadly also easily ignored as there is no profit in signing the pledge other than gaining a bit of PR or currying favour with the administration. This is not the Scottish Government’s fault they don’t have the tax powers to offer either carrot or stick.

If it did then instead of something for nothing tax cuts, solutions such as benefit corporation tax credits could be implemented. The Scottish Government should aggressively renew its demands for control over all business taxation so they can forgo the Conservative’s corporation tax cut and introduce a simple credit based system allowing companies to earn tax discounts through activities that drive shared prosperity. Imagine if Scotland decided to forgo the straight forward three per cent corporation tax cut and in fact raise it one per cent but before you scream that would make us uncompetitive, you link it to the business pledge and allow corporations to earn it back and more through tax credits earned by targeted investment and corporate behaviours that create a better fairer more prosperous Scotland. 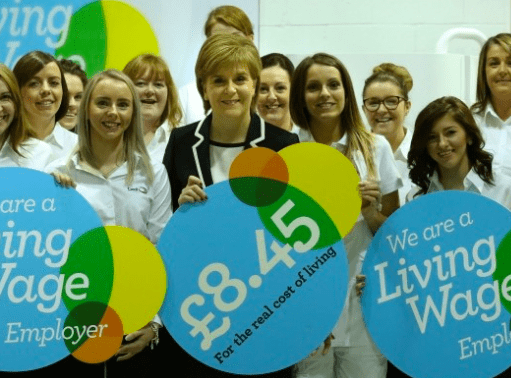 Imagine if big business could be persuaded to invest in environmentally sustainable practices that will help save the environment and boost our environmental and recycling sectors. If they pay the Real Living Wage, more consumer spending power will enter the economy and the savings on benefit payments merged with increased NI and PAYE tax contributions would be worth £1bn a year to Scotland’s revenues. Increasing exports would improve Scotland’s balance of payments and increase international exports.

Spending a target percentage of turnover on applied R&D and downstream innovation could be the foundation of a move to raise R&D spending in Scotland from 1.8 per cent of GDP to three per cent which has been calculated would add £12bn to Scotland’s GDP within five years. Combine that with enhanced employee engagement and you would increase productivity.

Hitting equality targets and employing young people and apprentices would tackle the blight of youth unemployment and end sex discrimination. Prompt payment of invoices to SME’s (30 days or less) would increase SME business turnover by between 5 and 10 per cent a year and increase the speed of investment in Scotland’s real economy, the most effective way to create jobs.

Basically what I am asking for is for Scotland to have the power to make big businesses earn the tax cut, possibly even to lower than the rest of the UK but only if they deserve it.

I believe this would increase overall tax income over time while placing Scotland in a competitively advantageous position versus the rest of the UK. Policy that meets the aspirations of the left in terms of business delivering a benefit to society, whilst also enabling the right wing’s call to make business more profitable and competitive – what’s not to like?

Scotland through federalism (that we will never we be offered) or preferably through independence which we can demand needs the powers to find a balance between economic growth and economic inclusion or neither our economy nor our society will be sustainable in the economic conditions that follow Brexit.

We do have the power to tinker with income tax bands, which is not a lot of use while the UK self destructs, it’s like offering to scratch a patient’s itch while ignoring a gaping wound. It’s a wonder how some people think that’s enough, it’s not even a start.