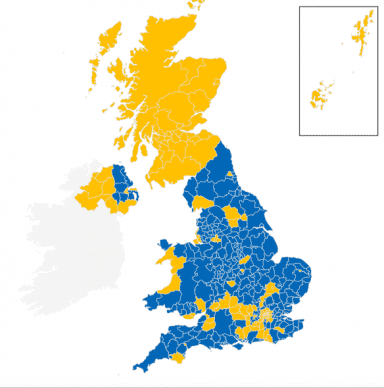 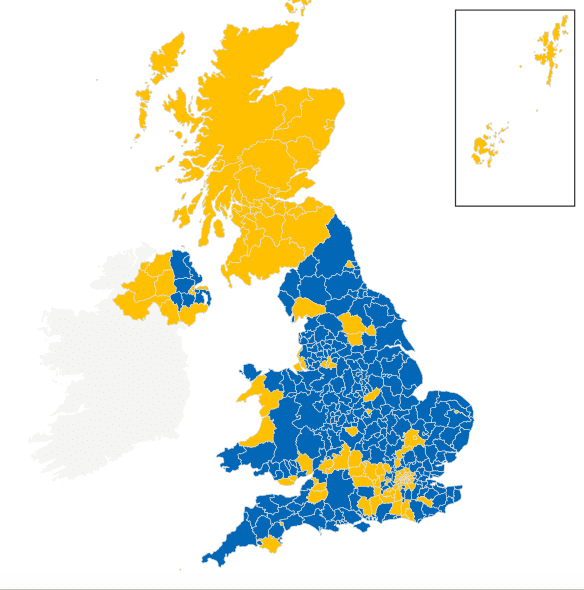 Every constituency in Scotland voted to Remain

Last week’s Brexit vote in the rUK which runs contrary to Scotland’s conclusive remain vote hasn’t just opened the door to independence, it has opened the door to a massive economic Brexit bonus for an independent Scotland, gifting us the opportunity to attract tens of thousands of high-paying jobs across many sectors.

It has also turned the economics of independence on it’s head – voting to remain in the self-destructing, inward-looking, xenophobic and rudderless UK is now the risky option and those No voters (sorry, potential Yes voters) are so very risk-averse. Brexit is the very definition of economic uncertainty, isolation and chaos that Scottish voters were told would happen if they voted for independence. Many of the 55% who wished to avoid such upheaval must now wonder if independence now offers comparatively more stability and economic opportunity than the political and economic sinking ship that post Brexit UK represents.

In 2014, I campaigned for Scotland within the EU and also for an independent Scotland to have an open market, a shared currency and some shared regulations with the UK. It seemed both logical and desirable, but if the EU referendum had been held first we might have known better how illogical and undesirable Westminster’s political elite can be, and we might have offered a different prospectus.

There are two unions at play but they are very different in nature:

The UK political union keeps 100% sovereignty (power devolved is power retained) in the hands of a distant, dysfunctional and uninterested Westminster political elite.  The EU trading union requires that we share 10% sovereignty to facilitate an open market and the promotion of shared prosperity.  The EU isn’t just the lesser of two evils it is the key to prosperity and the key to Scotland achieving it’s independence.

After independence Scotland will have left the failed political union with the UK but will still have a trading union with both the UK and the EU.  Sharing 10% sovereignty on a voluntary basis to maintain a UK common market makes perfect sense to all the UK nations post independence.  The UK will end up doing a deal to access the common market, or EEA, and they will pay through the nose for it, there will be no saving on membership fees, no change to immigration and no votes in the European Parliament, meaning an actual reduction in sovereignty. Let’s be clear the UK has no choice but to do an EEA deal, with a strong growing economy and a strong surplus and no sovereign debt the UK could manage a Brexit  with little pain but from where it is economically right now the UK must deal or crash.  On the one hand a deal would mean no border issues between an independent Scotland and England but on the other it could still be far less beneficial to Scotland than independence and full EU membership.

Scottish voters who voted for the status quo in 2014, often with a heavy heart and often purely due to worries about affordability (the main ones being forced out of the EU, or forced into the Euro with a Yes vote), forwent their national pride for what they saw was “common sense”. Many now look aghast at the narrow-minded, parochial British nationalism that forced a Brexit against their wishes and see that it looks the poor cousin of Scotland’s civic, international, green and equality-led national movement.

The EU scare story meant a lot to No voters in the 2014 referendum: Last week, Labour supporters voted 83 per cent remain, the Lib Dems 84 per cent and even the Conservatives were 73 per cent remain – many of those voters (maybe as many as 500,000) have now moved to supporting independence within the EU but they won’t vote Yes to independence outside the EU. If we leave the EU with the United Kingdom the dream is dead.

So, we are a year or maybe a year and a half away from a second independence referendum, a referendum that can’t be won unless the potential Yes voters from the Unionist parties see independence as the more stable, affordable and economically promising option, and without the safety net of EU membership that’s a huge ask. Fortunately for the Yes movement the mood music from the EU is very supportive of the kind of deal that would show independence to be the solution to the omni-shambles Brexit is and will remain.

Whatever EU trade deal the UK does will include open borders, so don’t worry about that old chestnut (Norway and Sweden have open borders) but it will be very hard for the UK to maintain full financial services market access as a non-member; Switzerland hasn’t managed that. As part of the EU the UK’s finance sector has EU passporting rights, essentially meaning financial services firms based in the UK can operate throughout the EU.

Not only will manufacturers who need to sell in the EU need to consider moving from the UK but so will online retailers of products that are sold with finance deals across the EU. But that’s nothing compared to the UK financial services sector, which desperately needs passporting, something many EU members who want to block the UK don’t. The French, Irish, Dutch and Germans in particular are eyeing the juicy bones that post-Brexit Britain’s European finance business may offer up.

If the UK is out and passporting rights are suspended at the point of actual Brexit, and for the following three or four years it takes the UK to do a trade deal that includes financial services, then London’s days as Europe’s leading finance sector hub are done.

If Scotland becomes independent within the EU in the next two years then the Scottish Government and Scottish Enterprise need to plan for a flood of jobs relocating from England.

Daniel Broby, director of the Centre for Financial Regulation and Innovation, at the University of Strathclyde’s Business School, said this week that if Scotland leaves the European Union, along with the rest of the United Kingdom, this could see the loss of 5,000 finance sector jobs. However, if we could maintain Scotland’s access to the single market then we “could see 50,000 financial jobs finding their way to Edinburgh and Glasgow”.

Financial services is worth about £7 billion to Scotland’s economy, independence within the EU managed correctly could see that double and along with other relocations create an instant, independence-related finance, exporting, manufacturing and construction/property price-led economic boom for Scotland. This sweeps away the worries about affordability and clears the way for a future oil-price rebound to create a sovereign oil fund so that we don’t waste what’s left of the economic benefit from oil as Westminster has done for generation.

The circumstances have changed so much from 2014 that No voters can now change their votes and still think they got it right both times. No matter what party you vote for, with a clear path for Scotland to be independent and prosperous within the EU, what’s not to like?