If a party wants to win an election they have to have done two things. Number one: the economy has to be working under your management, and if it’s not, you have to be able to credibly point out that you haven’t had time to repair it since the last lot broke it. People who feel your economic management isn’t helping them pay their bills won’t vote for you. Ronald Regan once won an election with a simple question, when he asked “Are you better off than you were four years ago?”

The second thing you have to do is keep the impossible to manage NHS off the front pages, and dear god don’t try to reform the NHS — it’s political quicksand. You will probably think I am over simplifying, but not being worse off, is seen by the electorate as a sacred right and the NHS their sacred cow. The question as to whether then NHS’s resistance to reform is necessary to protect it from the UK Government’s post-Brexit sell-off to American corporations or the reason it’s vulnerable to their privatisation agenda in the first place is probably a whole other article. 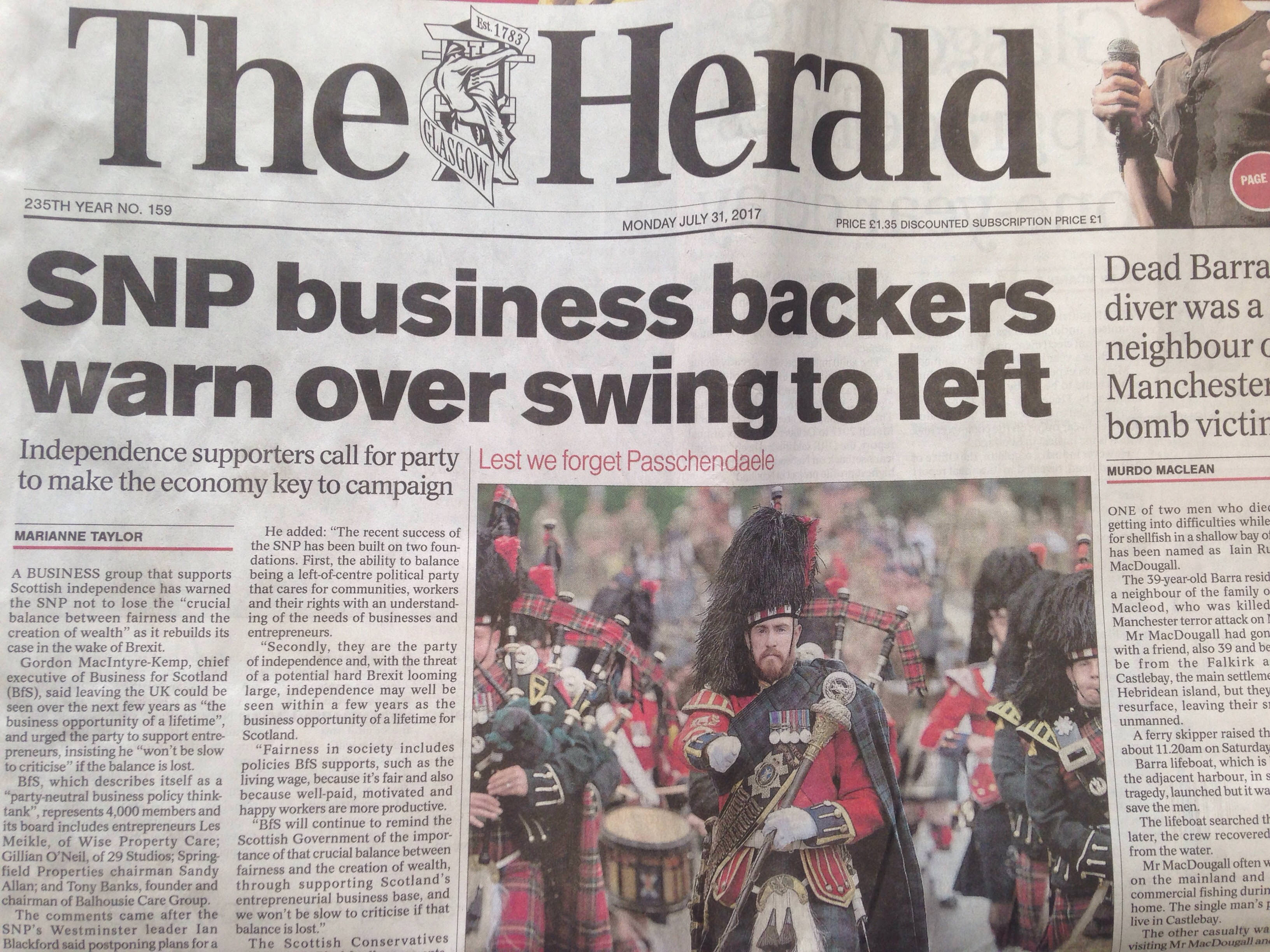 In a referendum on constitutional change, the economy underpins all other claims about the NHS, pensions, public transport, defence, welfare … explain how you are going to pay for it and you allow people to believe in your vision. It doesn’t matter if you self-identify as a socialist or conservative, everyone can agree that if the economy doesn’t work then there is less to spend on services and without increasing economic prosperity you can’t pay for the NHS, pensions or the social protections that are the glue that holds society together.

Last week when the SNP seemed to signal its response to a disappointing general election result was to be-more-Corbyn, I felt it was worth pointing out that the recent success of the SNP has been built on two foundations.

First, the ability to balance being a left of centre political party that cares for communities, workers and their rights with an understanding of the needs of businesses and entrepreneurs. Secondly, they are the party of independence and with the threat of a potential hard Brexit looming large, independence may well be seen within a few years the business opportunity of a lifetime for Scotland.

I pointed out that fairness and equality and creating an environment that helps business to thrive is not mutually exclusive. I said: “Fairness in society, includes policies BfS supports such as the Living Wage, simply because it’s fair but also because well paid, motivated and happy workers are more productive. BfS will continue to remind the Scottish government of the importance of that crucial balance between fairness and the creation of wealth, through supporting Scotland’s entrepreneurial business base, at all of our regular meetings and we won’t be slow to criticise if that balance is lost”.

Those comments (you know, the sort of stuff I write here every week) made it into several newspapers (The Scotsman and The i amongst others) and formed the basis of the Herald’s front page lead. Good, as it needed to be said.

The SNP will not win a majority at the next Holyrood elections and there will be no new referendum just at the point that the UK self destructs on the economy and accelerates the privatisation of the NHS with its decommissioning of the wider welfare state, and we won’t be able to do anything about it.

In these areas people just don’t see independence as making them richer and the SNP has to promote independence or its own voters won’t turn out. Labour supporters voted Tory to stop a second independence referendum (not that they can) and ended up stopping Corbyn being Prime Minister, an irony deep enough to drown you.  However, they wouldn’t have voted against a referendum if the SNP hadn’t been failing to make the economic case for independence and been looking shaky on business policies with the rates debacle, the growing discontent around Land and Buildings Transaction Tax and what looks like an exclusive fixation on social values. 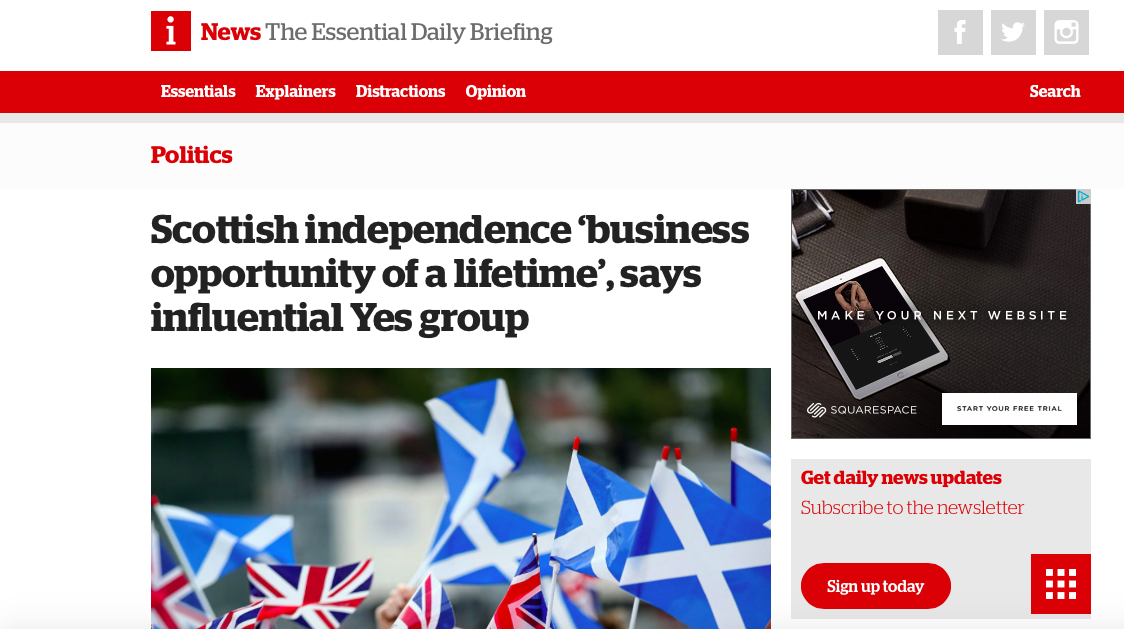 BfS coverage in iNews – with a more accurate headline

It isn’t an either/or equation, the success of the economy and the welfare and wellbeing of the people are one single issue. Where BfS differed from other business groups such as the CBI is that we represent more than 4000 small and medium sized business, entrepreneurs, employers, family business and the self employed — and we understand the need for balance to share prosperity more widely or the economy and society will suffer. The CBI represent big corporations whose understanding goes no further than the state of the stock market and policies that increase shareholder dividends. Their recent call for a real terms reduction in the minimum wage is toxic and would be economically counter productive but they are so wed to the old failed economic model that they are blind to the new reality.

They represent the old right and Corbyn the old left. I am more interested in the new economics where fairness and prosperity can’t be mutually exclusive, we need to give up on tribalism and stop thinking of left and right as good and evil (which one is evil depends on your viewpoint) and start thinking of it more like more about yin and yang. The seed from which prosperity grows is produced by the wellbeing of society and the seed from which society grows is produced by the prosperity of the economy.

BfS is part of the wider Yes movement and we accept there are many groups with diverse opinions on economic approaches and even a few socialist voices have been having a go at me for not being totally supportive of the SNP at all times, but I am just not going to rise to it. Sometimes the message we need to hear most is the one we want to hear least and if the next independence campaign is based on an appeal to the old left and not a positive vision of how to find an elevated balance between welfare and prosperity then we have already lost.