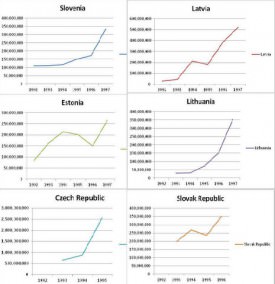 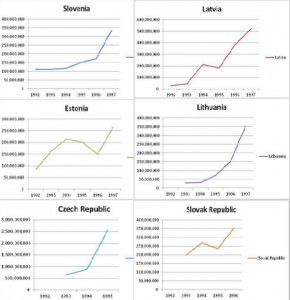 Despite the regular and unsubstantiated claims from the No campaign that even the fact that Scotland is having the referendum debate would scare foreign direct investment (FDI) away, the opposite seems to be true!

The new figures are due out soon and expected to be just as strong, especially with significant renewable energy investments and a resurgence of North Sea oil investment.

However new research demonstrates that Scotland could indeed expect a surge of foreign direct investment (FDI) following a Yes vote in September 2014.

Evidence strongly suggests that some of the most recently independent small countries in Europe experienced a surge in overseas investment in the immediate aftermath of independence, which experts and business people believe could easily be mirrored in Scotland – particularly given that many of those countries in the nineties did not have an economy as well developed economy as Scotland does.

In the case of Estonia the opportunities for business investment that have been created post independence have been very attractive. There is also a tremendous self-belief and ‘get up and go’ attitude evident. Its worth looking up the work they have done on internet development for example for such a small country (pop1.5m) Skype was an Estonian company (before they sold it to Microsoft).  They are proud to refer to their country as ‘E’-stonia”.

APD is an economic lever that we have suggested on Business for Scotland before should be in the hands of the Scottish Government and is partially relevant in terms of FDI.  When investing in Scotland foreign investors are looking to do business from Scotland as well as within Scotland and so international connectivity is important.

Control of APD and the ability to reduce it to encourage more direct flights would provide another boost to FDI as well as to Scotland indigenous businesses.  European Transport expert Professor Dr. Germa Bel, an adviser to the Spanish government and visiting scholar at Harvard, supports this view. He commented:

“Becoming an independent country implies higher demand in aviation. International organisations, Embassies and increased demand from business travellers has potential for increased connectivity particularly in intercontinental flights, this would certainly be the case for Scotland and would make overseas investment more likely.”

Given my own experience working in economic development I have watched the growth in both the political and economic power of small nations (especially within the EU) with interest.

We know that independence can benefit economies in several ways and that a growth in FDI is certainly one of them. The internationalism of trade and even the confidence that comes from simply making the decision to become a self determining independent nation can lead to an increase in entrepreneurial activity, which I believe will have an even bigger positive impact that FDI.

I was involved in FDI in Scottish Enterprise in the 1990s. FDI is like a sales process and as with all sales processes getting your foot in the door is important and your national brand can help with that.  Your cultural standing in the world helps you build relationships, and the support package combined with new connections to world markets and a confident economic outlook can close the deal.

Once Scotland is seen as a confident self governing country with a vibrant economy, we will have an advantage in attracting overseas investment. Success at the moment is being achieved despite of our current status as a far-flung undervalued economic region of London and the South East.  Just imagine what will be possible when we have a fully empowered Scottish Government, and we are seen as one of the emerging new progressive, and fast growing self determining economies of Northern Europe.