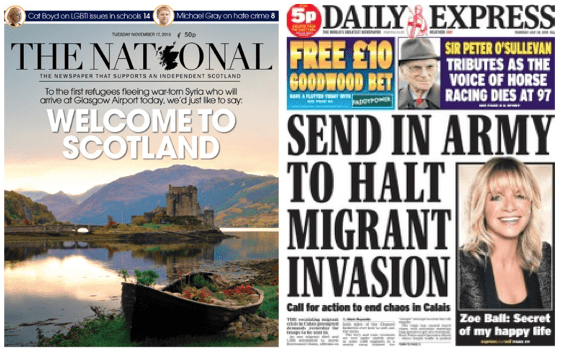 IF the EU didn’t exist you would have to invent it. For most of recorded history, European tribes then nations have battled one another for territory in Europe and for control of economic assets all over the world. Those days are gone now and the axis of global economic and political power has shifted, first to North America and now to Asia. 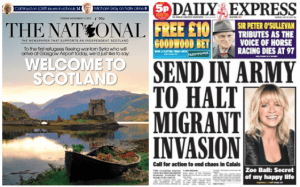 If the Common Market and European Union did not exist then Europe would be rife with trade and territory disputes and narrow-minded insular national agendas as championed by UKip and the xenophobic core of the anti EU campaign.  The British Nationalist movement seems to mistrust all foreigners and believe in the splendid isolation of the UK as if it were still some global power, contrasting directly with the civic and international national movement in Scotland which is essentially a campaign for self determination with a UK and EU trading block. Without the EU the overall size of the European market would be far smaller and prosperity among and within the nations would be distributed far less fairly. If you think that would be a manageable state of affairs, ask yourself how well that worked for most of the last century.

The European project, combined with increased global interconnectivity and trade, has redefined the shape of modern national sovereignty in the eyes of the enlightened. Independence for a nation state no longer means separation and isolation. It means controlling powers that are best applied locally and sharing on a voluntary basis some sovereignty over a limited but important set of powers that are best applied evenly over a shared common market or community.

This is the modern enlightened form of independence within a UK common market that was on offer in last year’s Scottish referendum and is also essentially what is on offer from the Yes side in the 2017 EU referendum. Will the BritNats in the rest of the UK reject that too?

Now clearly there are problems with the EU and I admit if you designed it from scratch now you wouldn’t create the bureaucratic expensive mess we have. The EU’s flaws provide case studies to be seized upon by the Europhobic and you can build a campaign on a few daft bits of legislation. Campaigns are about spinning points that support your claim, not showing people the big picture – and the big picture is that EU membership is good for Scotland and good for the UK.

In Scotland there is growing evidence that our population is able to understand that flaws can be expected in such a massive project – and that the best way to deal with them is to lobby for change from within the EU.

Last week we saw a poll that indicated 65 per cent support in Scotland for maintaining our EU membership versus 35 per cent who favour leaving. This week a poll by Ipsos Mori for STV News found the split 65 per cent to 22 per cent, leaving 74 per cent yes to the EU once you remove the undecideds. This was on the same day a Survation poll in the rest of the UK had only a two per cent lead for staying.

Right now there are 28 members of the EU and with increasingly open trade, this means companies in member countries can access a home market of 500 million citizens. This has made exporting far easier, though Scottish firms have been slow to take advantage. Many are wed to the UK market and lacking either capital or ambition to expand internationally.

It is also worth considering that the trade benefits of EU membership extend beyond its own borders. You have to ask if the UK would gain favourable trade terms outwith the EU for Scotland’s top non-EU food and drink export destinations, the US at £800m and Singapore at £202m. So we can see that sales to the EU and even our exports further afield are positively impacted on by our EU membership.

But would we lose all of this if the UK leaves? If last year’s No campaign were to run the EU Yes campaign then they would say “vote No and lose 300,000 jobs in Scotland alone”. The truth is there would be ways to renegotiate treaties and protect most of those jobs, but it would be expensive and exporting would become more difficult and less attractive to smaller Scottish companies who manufacture most of our exports.

One of the key complaints about Europe is that it encourages economic migration, given that EU citizens can travel freely within its borders, often without passport checks within the Schengen area, and also work without needing a permit or visa. Now where there are examples throughout the UK of anti-Eastern European immigration sentiment causing problems – even in Scotland (Govanhill in particular) – overall, economic immigration has been a huge benefit to Scotland’s economy.

Try looking after our old people in care homes without Polish workers willing to work for below living wage rates set by the councils. Try getting all those Scottish raspberries picked without migrant workers. Our building sector would be so short of skills without EU labour nothing would get built. Also don’t forget that 2.2m UK citizens live as expats in the EU – that’s 10 per cent more than the total immigrant population of the UK. I have to admit that bureaucracy from the EU is again a huge bone of contention. But meeting EU rules and regulations is a prerequisite to open trading with the EU, even if you are not a member – just ask Norway. The Norwegians have to live by the same rules and are also the 10th largest contributor to the EU budget even though they are not members and have no vote on what those regulations say.

Think about that the next time you hear Ukip saying a No vote would mean the UK would be truly independent. Not only is their definition of “independent” out of date and out of kilter with the modern interconnected and interdependent world, they didn’t want independence for Scotland and they also resist any fair (and promised) devolution settlement for Scotland. Ukip have set the anti-Europe agenda. They are two faced and any reasonable voter would turn from both of them.