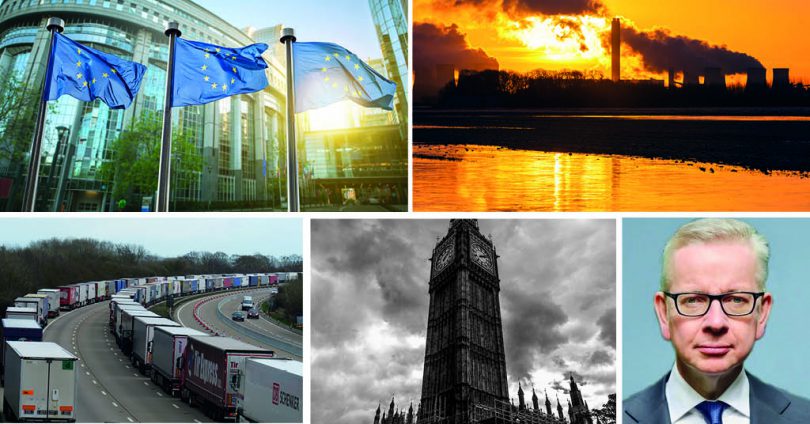 Michael Gove’s insistence yesterday that he would “never ride roughshod” over the Scottish government would be laughable were it not so seriously out of step with reality.

Mr Gove and his colleagues at Westminster have done nothing but treat Scotland with disdain and contempt for years. Their behaviour has made a mockery of their description of the UK as a partnership of equals.

The Cabinet minister made the ”riding roughshod” statement while fielding questions on the controversial Internal Market Bill at Westminster.

The Bill itself is just one example of how the UK government has worked against Scotland’s best interests. Here are just some of the instances of Scotland’s wishes and representatives being ignored.

Scotland voted 62% to 38% in favour of remaining in Europe in the EU referendum in June 2016. We were dragged out of Europe regardless.

The Scottish government argued for a soft version of Brexit, which would have involved remaining in the single market and the customs union. The UK government ignored the suggestion and ploughed on with the hardest of  Brexits.  The effects have been disastrous.

Westminster promised to consult with the devolved nations over Brexit. In fact Scotland was completely excluded from the UK government’s Brexit preparation talks 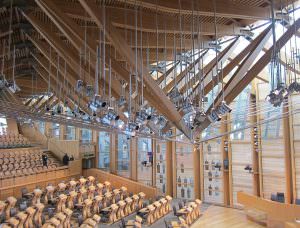 The Scottish parliament overwhelmingly refused by 93 votes to 30 to give its consent to the UK’s Brexit deal, which it had no role in negotiating. The deal was pushed through by the Westminster parliament, which completely ignored the Holyrood vote.

Westminster promised to consult with the devolved nations over Brexit. In fact Scotland was completely excluded from the UK government’s Brexit preparation talks. So much so that then Scottish justice secretary Humza Yousaf called for an urgent four-nation meeting on fisheries and maritime security.

He argued that it was unwise and unfair to freeze Scotland out of talks on these issues as Scotland’s waters cover 62% of the UK’s domestic exclusive economic zone.

After the UK joined the EU in 1973 the EU exercised certain powers over trade, competition and the environment, to name just some issues.  After Brexit the UK’s devolved governments had expected all such powers to come to them. Instead Westminster has taken them over, as well as the responsibility for spending money formerly by distributed by the EU.

In other words the UK government used Brexit – which Scotland had not voted for – to annexe important powers and financial decisions which the devolution settlement ruled should by rights be the responsibility of the Scottish parliament. If that isn’t ”riding roughshod” over Scotland what is?

The mechanism Westminster used for its power grab was the UK Internal Market Bill, which the Scottish government argues breaks international law. The Scottish parliament refused consent for this Westminster Bill and was once again ignored.

The bill is opposed by many Scottish organisations in business, industry, agriculture and the environment. The National Farmers Union in Scotland described the bill as ‘’a significant threat to devolution’’. The Scottish Council for Development and Industry called the bill ‘’detrimental to Scottish businesses and consumers’’. Nevertheless Westminster approved it in December 2020. 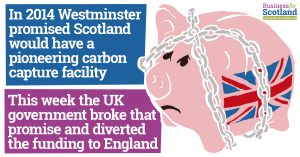 There is a litany of Westminster’s broken promises to Scotland. Here are just three of the worst.

Before the first independence referendum in 2014 then UK energy secretary Ed Davey promised significant UK investment in the world’s  first gas-fired carbon capture and storage facility at Peterhead. Just last week the UK government revealed it would not now be investing in carbon capture in Scotland but in two projects in England instead.

The pro-Union parties promised Scotland extensive new powers in The Vow published in the Daily Record newspaper on the eve of the 2014 independence referendum. Just hours after Scotland voted ‘no’ then UK Prime Minister David Cameron began talking about excluding Scottish MPs from voting on ‘’English matters’’ in the Commons. Since then Holyrood powers in many areas have been eroded.

Westminster argued it was best placed to support the most vulnerable in Scotland. Now it’s planning to cut a £20 uplift in universal credit

Westminster argued it was best placed to ‘’support the most vulnerable in Scotland’’. Now it’s planning to cut a £20 uplift in universal credit agreed to help those most in need to cope with the extra expenses of the pandemic. The Joseph Rowntree Foundation described the move as the biggest overnight cut to the basic rate of social security since the Second World War.

There is also,  of course,  the snub to democracy the Westminster government has delivered since the Scottish elections in May. Scottish voters returned a clear majority of pro-independence MSPs yet Prime Minister Boris Johnson, supported by Mr Gove, continues in a doomed attempt stand against a second independence referendum despite the Scottish government’s vote in favour of holding it.

The referendum will be held regardless before the end of 2023 … by which time the momentum for a Yes vote will be unstoppable.