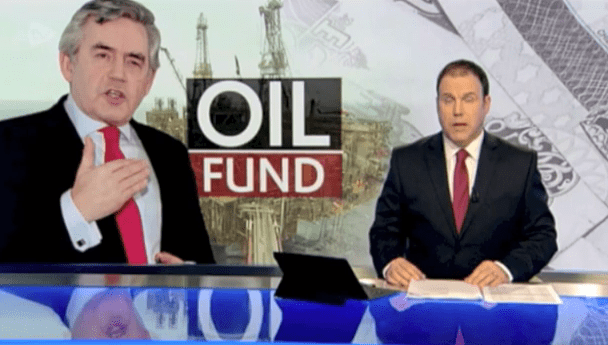 Gordon Brown is the man who once promised us an end to boom and bust and then presided over the biggest bust in living memory.  He made a promise to the Scottish people on a timetable for new powers for Scotland if there was a No vote, and then championed a petition saying that Westminster hadn’t delivered to his own timetable. Brown, who as UK Chancellor and then Prime Minister refused steadfastly to invest in a sovereign oil fund to help deal with volatility in oil prices, has today called for an oil fund to be set up to deal with the current volatility in oil prices.

Two things jump out at me immediately from the story on STV news tonight. No, I am not talking about the obvious contradictions above, or even the fact that in every political debate I have ever had with a Labour politician (including the Shadow Finance Minister  – twice) they have claimed outright that you cannot start an oil fund when you are operating a deficit. The UK is still operating a deficit and the national debt is still going up, but now suddenly an oil fund has become a good idea.
First of all, listen carefully to the interview above; Brown is not calling for an oil fund to protect spending public services in Scotland given the tax revenue fall from the oil sector, he is calling for public spending to be diverted to the oil companies. This is a subtle change from the role of a sovereign oil fund that Business for Scotland and others have been calling for. He thought a fund was a bad idea when the purpose was social, but now that its purpose is protecting big business it’s a good idea.  There certainly should be funds from the UK Exchequer to help the industry, and that should not have a knock on impact on Scotland’s block grant. Revenues from the oil sector are classed as being from from the UK continental shelf, and not as Scottish revenues, and the money goes straight to the UK Treasury and not to the Scottish Parliament, so it is only right that the money flows the other way when the oil sector needs help – and not just from the Scottish Government’s block grant.

The second thing that jumps out from the reporting is that all the channels are still wording the price drop in a way that makes it sound as if the oil price is still below $50.00 a barrel.  Its not. Today it hit $62.58. Ok, so that’s not a great price nor is it long term sustainable for deep sea oil wells under the current tax regime, but it does represent +25% over the low and surely any appropriate reporting would mention that, just as they would if it had dropped a further 25%. 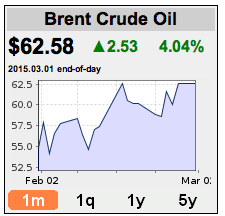 There absolutely should be an oil fund set up, a Scottish oil fund, and the fund’s main goal should be to invest in renewables and innovative energy solutions that will replace oil and gas as a driver for the North East and for Scotland’s economy over the next 40 years as the oil reserves do start to run out.  The price will come back, so it’s short term help that is needed, but we also need to think longer term and a new policy approach based on stewardship rather than just seeing the North Sea as a cash cow is needed.  Starting an oil fund now will look very clever in hindsight, indeed so would co-investing in oil fields going forward.

Gordon Brown isn’t a late convert to the idea of an oil fund, he simply wants to score some half credible soundbites and as always seems completely unaware that so many of his stated positions are completely contradictory.