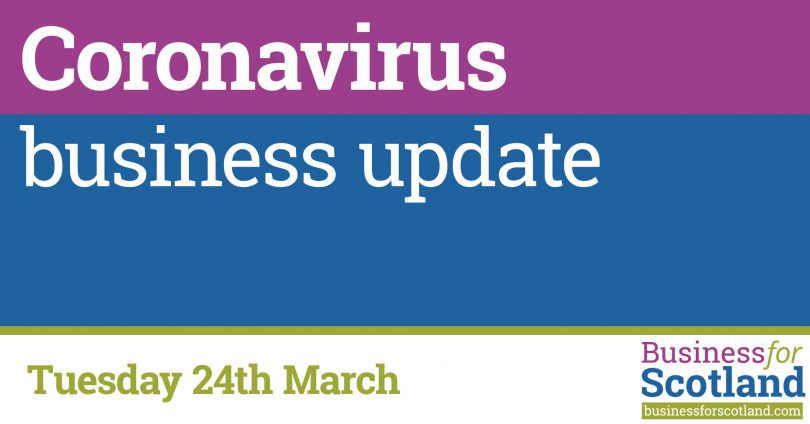 The UK Government will see an amendment to the Coronavirus Bill that suggests this level of support (actually capping it at £2,917). This amendment will almost certainly be rejected by the Conservative Government as it is a Lib Dem amendment and the Conservatives will not want to allow the Lib Dems to claim it was their idea.  But hopefully, this will mean that the Conservatives push forward with their own support solution and one that is probably capped at £2,500 to match the wage support sole trader directors can claim.

Business for Scotland has written to Scottish Ministers to urge them to increase pressure on the UK Chancellor to swiftly announce stronger Covid-19 support measures for the self employed.

For the UK Government to have delayed support for the self employed this long is a major error, especially when there are best practice examples available from other European nations. Measures such as the deferral of self-assessment tax requirements, payment holidays for mortgages and the ability to claim Universal Credit (not all will be eligible) announced so far will not be enough to stave off millions of bankruptcies across the UK and hundreds of thousands in Scotland.

According to the Scottish Government, there are  321,300 self-employed people in Scotland and roughly 5 million it total across the UK have not, so far, been fully supported by the UK Government’s plans and have not been offered the same lifeline already announced for companies with employees on the payroll.

Business for Scotland supports the Norwegian Government’s approach, which offers grants of 80% of the average of self employed people’s declared income of the past three years. This grant should go up to a maximum of £2,500 a month matching the support level given to companies with waged employees through HMRC.

Those self employed people who do not have three years of earnings to present will have an immature business and so their earnings will be lower, so they still deserve 80% support.

Many roles in cultural industries and health and fitness are self employed or sole traders, as are many people in the building trade.  People ranging from personal trainers, to interior designers and architects, from IT consultants, to food delivery drivers, gardeners to plasterers, joiners and plumbers, physiotherapists and counsellors will all be impacted, along with many more self employed professionals.

Self employed people are those that do not operate Limited companies but generate a wage via business activities and fill in a self assessment to inform HMRC of their earning and tax due. Those are the people that do not yet have support confirmed.

Sole trader company directors, also known as one man band companies, have been worried that as they do not have any staff that they would not receive the 80% wage support level that employees of companies do. We don’t have it in writing yet but the consensus from reading the announcements so far is that owner directors and one man band operations are entitled to claim 80% of their salary as if they were non-owner employees.

The downside for directors is that dividends will not be included in calculating the earnings that they can claim against.  If you are a company director that pays yourself with dividends rather than a wage then you will likely fall under the self-employed bracket discussed above but not yet announced; we can’t guarantee that yet so keep reading our updates.

Remember, as we informed people in yesterday’s update, to make any claim your employees – and this also means owner directors – must be furloughed (that is put on paid leave), you cannot do any work for the company or continue trading in any way during the period you are claiming for (this should not include making claims, submitting information to HMRC or stop you carrying out your duties as a company director).  If you think “oh I can just do this little bit of work and that will earn me £300.00” then you are not furloughed during the period and can’t claim support for your wage.