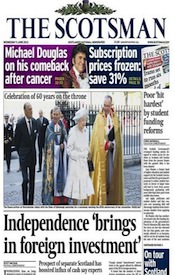 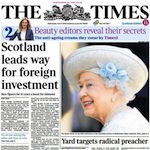 An Ernst and Young report into Inward investment says that Scotland had a record year for FDI (foreign direct investment) projects.  Ernst and Young found that foreign companies are more likely to choose Scotland than any other part of the UK outside of London to invest in and create new jobs. This despite the repeated claims from the No campaign that even holding the referendum would damage inward investment. Ernst and Young said 5,926 jobs were created in 76 overseas investments in 2012, up by 50% on 2010.

Business is about both opportunity and risk. Few ventures don’t contain some of both. The ‘science’ (or ‘art’) of business is the ability to be able to assess both, and to make investment decisions based on that assessment, (and to create jobs and wealth along the way).

FDI (foreign direct investment) has always been a critical part of international business, especially so in the global age. Local start-ups are great, and should be encouraged to prosper and grow, but a healthy measure of FDI is also a critical part of the mix in a modern successful economy.

Not only for the value it brings to the economy, and for the opportunities if offers existing local SMEs and microbusinesses, but also as a ‘vote of confidence’ in the state of that economy.

FDI is influenced by many things: access to markets, cost and ease of doing business, government support (financial and other), infrastructure (including ‘soft’ aspects such as education levels as well as roads and airports) and the strength and prospects of the specific economy where that FDI is being made.

The news that Scotland has shone in recent FDI activity, standing out from the crowd that is the rest of the UK, should be no surprise. Neither should the statement from Ernst and Young that when considering the prospect of Independence there is “no sign of investors being deterred from coming to Scotland; if anything the reverse seems to be true”

Reality Check for the No Camp

I’ve been involved in quite a few FDI decisions in my career, both when working for large corporations and latterly when investing funds from my own and partners businesses.

International businesses are sophisticated creatures that make calculated investment decisions based on a full assessment of both opportunities and risks. They don’t toe the party political line when it comes to posturing or positioning. They assess business reality and look beyond emotional attachments to specific political structures (even if they are 300 years old).

They know how to read Profit and Loss statements and Balance Sheets (whether for a corporation or for a nation), and they know a fundamentally strong economy with tremendous growth potential when they see one.

They don’t get put off by media reports that continually stress how difficult everything is – they are big enough and clever enough to make their own decisions about whether a business opportunity makes sense.

They also know from history and from their experience that new nations benefit from a surge in energy, dynamism and innovation that offer very fertile grounds for business opportunity. They (and their shareholders) want to be part of that. This is especially so when the new nation in question is born with existing political and economic structures already in place, with a history of targeted effective support for FDI using the limited economic levers currently at its disposal, and without the turmoil and upheaval that often accompanies the ‘birthing process’ in less stable parts of the globe.

In short global businesses recognise the tremendous business opportunities that an Independence Scotland would present, and more and more are positioning themselves to take advantage of that. As the momentum builds towards a positive outcome in the vote next year the investment calculus of international businesses will point increasingly towards the wisdom of ‘Invest in Scotland’ strategies.

Unfortunately too many Scottish business people find it difficult to free themselves from the restrictive and emotional party political dogma that sees historical political structures as being more important than business opportunity.

This also chimes with the latest research covered on this website that newly independent countries revive a significant boost to inward investment following independence.  This is probably due in part to the focus of the worlds attention on the newly created country, the fact that policies are made to boost business locally rather than for the benefit of the other parts of the previous union and that the natural process of renewal and reinvention combined with rising self confidence in the population makes those countries exciting places to do business.

The good news is that we are starting to see more and more businesses people take a step back and take a hard headed look at the economic realities of where we are and where we could be. They are beginning to focus on the numbers that support the economic case for Scotland plc. They like what they see and are beginning to recognise the great business opportunities that are there for the taking. The explosive growth of Business for Scotland’s membership in recent weeks is testament to that.