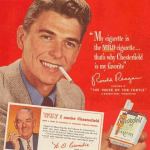 Ronald Reagan helped shape modern political campaigning, his Hollywood (minor) star looks and faked sincerity set the scene for decades, his “Morning in America” broadcast made people cry and vote for him in droves.  His campaigning mantra was simple: “If you’re explaining, you’re losing.”

That lack of explanation has made “austerity” and “reducing the deficit” foundations for electoral success in the UK. However in Scotland, years of referendum debate and education means people understand more complex arguments and there is growing hunger for enlightened un-spun politics.

The problem with debunking austerity is that it makes sense to those that don’t understand the difference between how a household economy works and how a National Economy works. The argument that, when income falls you need to spend less, makes sense when you think of household budgets, but national economies don’t work that way because income is related to what you spend. However, there is an easy visualisation exercise that can help people can easily understand in economic terms why austerity is bad for the economy and why maximum devolution will boost growth.

Imagine looking at a huge engine from a distance, it seems to consist of two huge interconnected cogs both turning and each powering the other. As you move closer you see that the right cog is labelled private sector and the left, public sector. The job of the machine is to move money around the system and you see that the more money one cog feeds to the other the faster and more efficiently the machine works. The money from the private sector cog is called tax revenue and the money from the public sector cog is called government spending. When the private sector accelerates successfully it creates jobs and increases the tax base transferring more money to the public sector. When the public sector spends more money it creates jobs by  giving contracts to the private sector forcing the private sector cog to accelerate. The economy grows and as well as creating a virtuous circle it changes the structure of the government spending, as less people rely on welfare and so social spending decreases. At this time of optimum economic performance you can pay back debt so that interest payments fall and growth becomes more sustainable.

You will see times when the private sector cog slows and less tax revenue goes to power government spending. With less money in the private sector wages stagnate, investment plans are shelved, people and businesses borrow more to survive but purchase less. The welfare element of government spend increases leaving less money for construction, defence, road and communications infrastructure and even vital services. This slows the private sector even further. Concerned at the noise of the stuttering engine you move closer and see that the public sector cog has a set of gears  and it’s sitting in neutral. You have a choice of two gears; the first is labelled “accelerate” and the second is labelled “austerity”. You remember a politician saying their top priority is to make cuts to balance the budget. But then you have been watching this machine and you know how it works; it’s not a household budget where the more you spend the less you have. With this machine the more Government spends on growth related projects the more tax revenue the private sector generates. If you put public spending into reverse then more jobs will be lost, less money will circulate, people will be made redundant and it will be harder for people to find work and you will just have to switch more government spending towards welfare. Less tax revenue will flow to the government, and so spending less will actually slow growth and increase the deficit.

So you reject austerity and accelerate. This means putting some new money into the system (running a deficit), you invest in GDP growth creating projects and the public sector cog grows forcing the private sector cog to work faster. This creates new jobs, reduces welfare payments, increases the tax base and slowly but surely the flow of money from the private sector to the government increases so you can maintain current levels of government spending whilst reduce the debt that the deficit period generated.

Standing close to the machine now you see something interesting; the two big cogs are themselves powered by hundreds of little ones. Looking closer you can see the smaller ones are labelled things like finance, agriculture, oil and gas, manufacturing etc and they are all connected to smaller groupings labelled Wales, the South East, the North West, Scotland, London etc. You can see that the finance cog is dominant in London, fairly large in Scotland but fairly small elsewhere. You can see that the London grouping is rotating fastest, it looks well oiled and well serviced whereas the other regional groupings are just left un-serviced. 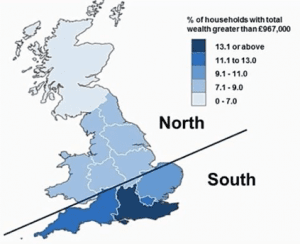 You can see that the person in charge of the machine has followed a deliberate policy of only fully servicing the London and South East grouping and the cogs related to the bigger industries in London and the South East, such as the finance and service sectors. This has led to some regional economies failing to properly add power to the private sector. This deliberate policy has slowed many regional economies and damaged sectors such as engineering and manufacturing creating localised poverty.

You have an epiphany: austerity doesn’t cut the deficit and create sustainable economic growth, it cuts off the lifeblood of the economy just at the time that it needs investment most. In the long term, austerity will lead to larger deficits and the need to borrow more or raise taxes – austerity doesn’t make people better off it makes them worse off. The economy has been run for the benefit of the finance sector and big business and not for the welfare of the people. Running the economic machine is not about believing in the left or the right cog, a high functioning machine requires an optimum balance of left and right working in perfect harmony. A high functioning machine needs the power to service local economies to be devolved to those closest to the problems so they can adopt localised servicing policies and help power the private sector cog.

An end to idiotic austerity, to left versus right and centralised London City focused economic policy becomes your mission, so you decide to get involved in politics to help build a better machine.  You get on TV your opponent uses her 30 seconds to hit you with sound bites, fear and mock indignation. She sneers, all you want to do is spend, spend, spend and bankrupt the economy. The interviewer turns to you, you have 30 seconds, so you start explaining but you are already losing, except of course for viewers in Scotland, where two years of higher political and economic engagement has enlightened and informed the population and austerity has no mandate whatsoever.