Tsipras thinks the EU is bluffing – lets hope they are but Greece has failed the infrastructure investment test.

Some time in 2010 I was on some obscure BBC radio show talking Scottish economics and was asked if I thought we should bail out the Greek economy.  I said “no – we may as well flush any moment we give them down the toilet – in fact they would have to put it in a bin beside the toilet as the greeks couldn’t get the toilets to flush properly”.

A bit harsh maybe but it is a point I have made many times.  When you look at the soundness of an economy it isn’t just the debt to GDP or the GDP per head and it sure as hell isn’t the rate of growth in its stock exchange that indicates economic health but also the actual infrastructure of the country.  If a country has week economic growth and fairly high debt to GDP ratios but has been investing in building roads, bridges, new rail lines, broadband infrastructure, hospitals and business parks innovation centers and the like then you have a solid foundation upon which to grow the economy.  If the Governments debt is high and even if growth is good but they have never invested in meaningful capital infrastructure projects then not only is any top-line economic performance likely to flatter the real picture but the foundations are built on shifting sands. It almost always also indicates high levels of Government incompetence and corruption.

I said at the time and I hold now that a managed default at the beginning of this crisis and exit from the Euro with a lot of debt write off help to give them a chance to avoid a killer recession and contagion to the rest of the EU was the best way to go.  However to the EU mandarins and champions of the and federal EU vision would have seen that as an admission that they were wrong.  A backwards step that would have signaled the end to the EU expansionist mantra and this points to the second set of incompetent politicians in the greek economic tragedy.  When Euro membership was agreed a diverse range of countries were involved. The EU asked “how could you have a pan European currency and not involve mediterranean nations such as Spain Greece and Italy? That was a political and not an economic consideration which led the Euro membership to be dangerously diverse. When considering sharing a currency between nations it is generally agreed they need similar levels of productivity, similar trading conditions / levels of Government corruption, the free movement of labour and exports and agreed debt to GDP ratios.  I would also add similar levels of infrastructure investment and cultural similarities so that movement of labour doesn’t cause racial tensions and give rise the UKip style political parties.

The Mediterranean nations don’t fit with the shared currency model (the UK common market would after Scottish independence but thats a whole other article) but it could still be made to work if the European Central bank was willing to use quantitative easing to buy back debt and re-capitalise the Eurozone. Quantitative easing (often called printing money) has been an anathema to the Germans as the idea of creating new money and using it to pay of debts can lead to inflation. When pre WW2 Germany (the Weirmar Republic) got  printing new money wrong it led to Uber-inflation led to economic collapse and the eventual rise to power of a right wing self appointed savior of Germany called Adolf Hitler. As case studies go that is pretty much the worst ever and explains why Germany refuses to allow the ECB to properly recapitalise the Eurozone and effectively press the reset button. you know like when your computer fails often you need to reboot. The ECB has been using QE to stimulate the economy and the impact of this new money has weakened the Euro making exports out-with the EU more attractive and this will stimulate the EU economy but even Euro 1trillion isn’t enough to reset the Eurozone and and end the Greek problem off course its not really a greek problem there is only the Euro problem and they are looking at it the wrong way.

It is the one big drawback of a currency union, that if quantitive easing is required and you have your own currency you can increase the flow of capital into the economy and kick start investment and growth. Make no mistake the only reason the UK economy hasn’t collapsed completely is because the Treasury through the Bank of England (BOE) has used quantitative easing to re-float our economy. They have done this buy issuing new high quality sovereign bonds to buy back Government debt effectively now the BOE owns £375bn of the UK’s Debt and obviously doest need to charge itself interest and this is why Government interest payments have fallen despite Government debt increasing.  It is also why interest rates have been forced down and the idea is that low interest rates will force banks and financial institutions to lend to business and people but this has not happened to the extent desired as the banks would rather keep their risk levels low till shareholders are seeing dividend growth. 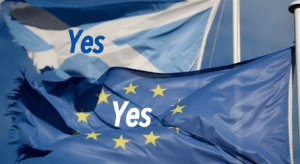 Being to hard on Greece would provide ammunition to Ukip and thyme EU No campaign.

So with QE starting to be used and with a great deal more scope available to the ECB, with the Greek people voting against accepting ridiculously severe austerity measures and the cost of a Greek exit now higher than at the beginning of the crisis we should soon see a compromise solution emerge that keeps Greece afloat and allows for longer term less austere payback terms. Tsipras thinks the EU is bluffing and either he is right or they are incompetent and unaware that they are sowing the sees for the end of the Euro experiment. “Look what they did to Greece” would be Ukip’s EU referendum rallying call.

In the UK right now we have low inflation, fair to middling growth, not bad unemployment and a comparatively strong currency (too strong for Scottish Exports) but economic indicators are mixed and austerity could cut of growth and lead us into a slow down. The conditions are right for more quantitative easing but the Chancellor probably, mistakingly, thinks we don’t need it. However what the Neoclassical (trickle-down / Thatcherite, OBR / IFS) economists think is that QE should be used to increase the money supply through the finance system but its not the only way and it causes problems of its own.  In the UK QE has helped reduce interest rates which helps consumers and keeps mortgage payments affordable but it has also increased societal inequality.  We have given huge amounts of new cash to the banks and they then failed to support small business but rather invest in stocks and shares increasing the value of shares and bonds so those that benefit personally are those that are wealthy already.

A way to ease this issue which might just have been palatable to a Tory government would have been if Osborne in his July budget had announced the creation of an SME business bank and use QE to invest in SME growth, offering better access to business loans, investment in companies that are priotritising R&D, exports, improved productivity and job creation. Add increase capital investment in infrastructure into the mix and thats how to kick start the economy. Increasing the minimum wage – he hasn’t adopted the Living Wage (thats just spin) is a good start and should be cautiously welcomed but as Osborne has also cut working benefits he is giving with one hand and taking with the other.   A nice bit of slight of hand using the  (almost) Living Wage commitment to provide cover for the cuts – better than hoping that  that unlike the Greeks we won’t mind continuing to pay for bailouts where 90% of the cash goes to banks and the people don’t get services or any chance of increased wealth or opportunity. Stops us asking the question “whose economy is it anyway?”