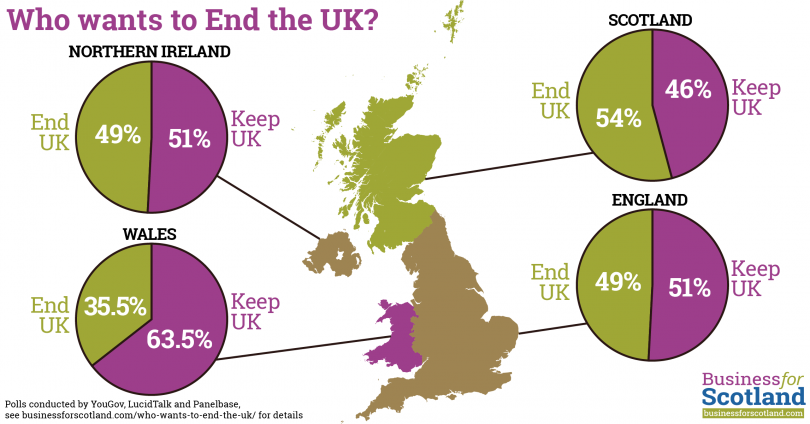 The UK is falling apart at the seams. Unprecedented levels of support for ending the UK have been recorded in each of the UK nations.

Brexit has exposed the UK as a union that only works for England and Devolution has shown that even in a time of crisis, such as COVID-19, the devolved parliaments and assemblies put the wellbeing of the people they represent first. The dysfunctional Westminster Parliament has shown it is not fit for purpose and is obsessed with delivering Brexit despite being in the middle of a health crisis. The Conservative Government is wedded to a semi-religious drive to reopen the economy, despite that reopening too soon will actually slow the economy in the long run. Indeed UK citizens are dying for Brexit – literally

Britain is a concept that is held dear only by minorities in each of the nations of the British Isles. Most people are either undecided about the future of the Union or in favour of independence/unification of their nation.

In England, Brexit is a symptom of English nationalism. When Panelbase polled English based voters last week they found that 49% supported English independence and 52% were in favour of maintaining the Union. Within that poll, 52.5% of Conservative voters supported English independence, as did 51.5% of Labour voters. This means that only Liberal Democrat voters, at 67% in favour of maintaining the Union, are holding the UK together.

The idea of the four sovereign nations in the British Isles being united through friendship and partnership, and running our own affairs, rather than being bogged down in endless constitutional wrangling within a disunited kingdom, is something that is clearly appealing to a growing number of voters in every corner of the UK.

Details of the polling data used in the graphic above.