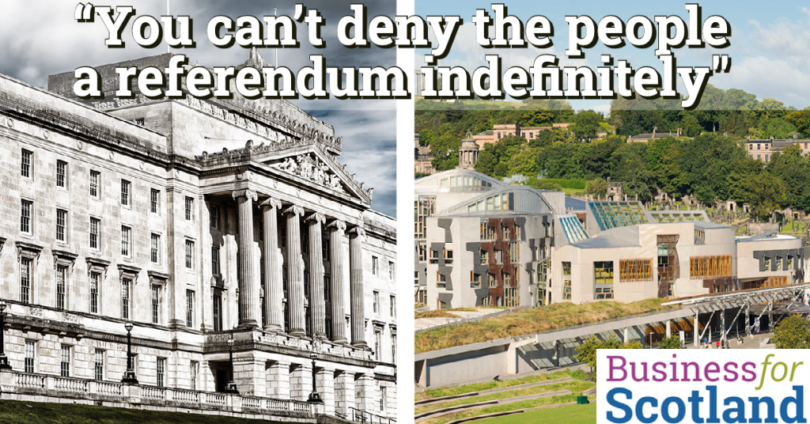 Last week, as the leader of the largest party in the elections to Nothern Ireland’s Parliament, Sinn Fein, Michelle O’Neill was elected First Minister.  She can’t take her seat at the moment because the DUP is refusing to cooperate.

Commentators in the Unionist press have fallen over themselves to point out that Sinn Fein’s victory in last week’s election is merely symbolic, arguing that it doesn’t mean a border poll is on the horizon.  But don’t underestimate the power of this historic moment. It gives Michelle a global platform from which to lead a conversation about building a a new Ireland that is more than the sum of its parts.

Another important change in the Stormont elections was that the centrist Alliance party under Naomi Long became the third-largest, challenging the binary divide of NI politics. Stormont itself, a 90-member chamber where the minutes record Ian Paisley Junior howling “Moo, Moo, Moo” throughout a speech by Monica McWilliams, is changing too. It is now one-third women.

Ireland was split a century ago into two monocultural states where many people found their faces didn’t fit.  The Republic of Ireland is now more progressive, more inclusive – moe than 0.5% of its population is currently made up of Ukrainian refugees, for example. Sinn Fein has said they want a citizen’s assembly to discuss what a united Ireland will look like. Work is beginning on planning for an economically dynamic and socially inclusive European democracy across the divide. That is a conversation that Scotland can join.

Like Scotland, being part of the Union has damaged Northern Ireland’s economy

The UK’s London-centric economic policy directs investment to Northern Ireland on the basis of the “Barnett consequentials” of policy choices made to benefit the south of England.

After the Good Friday Agreement, for example, major investment in Northern Ireland’s economy could have helped it to change its position as one of the least productive, least well-educated and poorest regions of the UK. But that did not happen, instead, the divide continues to grow.  A report from Ireland’s Future says:

“Data from 1990 onwards confirms that UK Governments largely abandoned any attempts to support poorer regions through regional policy and, as a direct consequence, the gap in income levels between the North and wealthy areas of GB began to widen considerably again over time. For instance, between 2000 and 2014 the gap between per capita GDP in N Ireland and the three wealthiest regions of GB increased by 44%.”

The report disputes the “subvention”. Unionist media, such as the New Statesman,  likes to uncritically quote a “massive £15 billion” annual transfer to support the province, but if you take out the amounts London charges Northern Ireland for its policy choices and the pensions that people have accrued through their taxes, the amount is very much less.

Unification would be likely to trigger large-scale investment from both the EU and the USA. The EU invested heavily in supporting Germany’s unification process. The USA’s Irish diaspora would be also keen to see new Ireland make it. This investment could help unleash Northern Ireland’s huge productivity and development potential.  The report concludes:

“It is clear that a fully integrated, efficient and stable all-island economy would be a magnet for further investment and human creativity.”

As with Scotland, Brexit means NI has lost EU workers who were vital in many areas of the economy, especially hospitality, health care and agriculture.

NI Farmers rely on the EU’s Common Agricultural Policy, the EU’s mechanism to support food security and keep food affordable, for 88% of income. The replacement funds from the UK fall far short of what was expected. The UK Government seems determined to transfer the cost of food production from tax-payers to consumers, who will have to pay more at the shop counter.

The UK Government’s delayed Brexit-related import controls – although export controls are in place – is also causing anger among NI farmers. They are currently protected from the full effects of this by the protocol –  Scotland’s farmers are already feeling the pain.

Of course, it was Brexit that split the Unionist vote. Around 40% of Northern Irish people who identify as Protestant did not support Brexit, and about a third of those who identify as Unionist. The province overall voted to remain in the EU. It was that split that handed victory to Sinn Fein.

The DUP are currently saying they won’t go into Government with Sinn Fein – unless the UK Government suspends Article 16, triggering a trade war with Europe.

The UK Government’s current threats to suspend the Northern Ireland protocol are probably simply posturing. Doing so would be very risky for all sides. Further trouble, annoyance and unravelling of the UK Government’s disastrous Brexit deal are only likely to increase support for Irish unification.

Out of the shadows of a failing United Kingdom, Ireland and Scotland can work together

Northern Ireland will also have to negotiate with the UK Government over issues like a share of the UK’s national debt versus the pensions entitlements of NI citizens, built up through national insurance contributions. Some of the challenges and opportunities they face will be similar to Scotland.

Work in Ireland has already begun on planning for unification, with Ireland’s Future organising a gathering this autumn in Dublin’s 3Arena in front of 10,000 people with “major names” from Ireland, Europe and the US, “as the unity referendum moves into a new phase”.

They also have an event in London on May 18 in Westminster.The CEO of Ireland’s Future, Gerry Carlile said last week that there is an onus on the Government in Westminster to