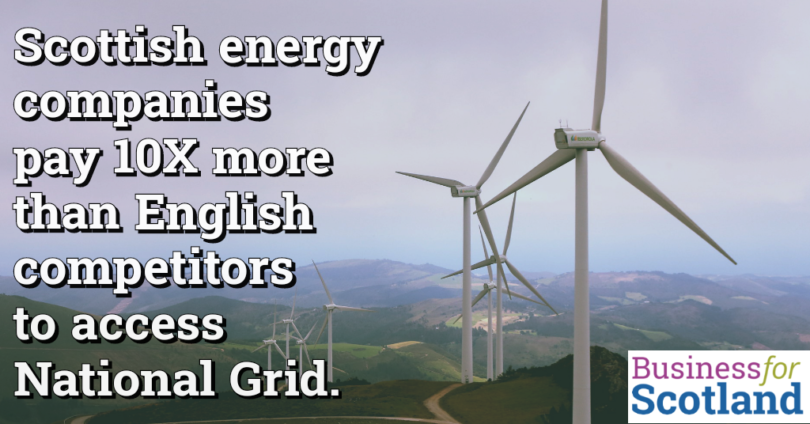 The UK Government’s energy strategy involves taking Scotland’s national energy assets on terms that are detrimental to Scotland’s economy. The document claims it “will work with the Scottish government” – but in reality,  it did not even consult with the Scottish Government or inform ministers before publishing it.

The UK Government makes the assumption that it can use Scotland’s assets on whatever terms it chooses, without consulting Scotland’s elected Parliament.

“We will be the Saudi Arabia of wind power, with the ambition that by 2030 over half our renewable generation capacity will be wind.”

It does not even mention that the bulk of this power will come from Scotland. Currently, Scotland produces a quarter of all the UK’s renewable energy. Its onshore wind turbines produce 8.5GW of the UK’s 12GW. The strategy document mentions that communities should be able to benefit if they put in onshore wind – so why should Scotland not benefit?

Far from benefiting from exporting wind energy to England, Scotland is penalised. Scots consumers are forced to pay more for energy. Renewable producers based in Scotland have to pay ten times what English energy producers pay to link to the national grid.

The UK Government’s strategy includes licensing more fossil fuel extraction from the North Sea, where oil companies work under an unusually-favourable tax regime.  In 2020, the tax take from oil revenue was about 1% of value – a paltry sum which was notionally allocated to Scotland in “GERS”.

These lightly-taxed oil and gas firms have donated more than £1 millon to the Conservative Party since the last election.

The UK Government’s strategy also plans billions for new nuclear power plants – despite the fact that, unlike renewables, nuclear energy is getting more expensive over time. Analysis by JP Morgan suggests nuclear power is unlikely to prove good value for money.

Electricity from Hinkley C will cost twice as much as from existing nuclear plants – when it comes on stream it will cost more than tidal power from the Northern Isles which is comparatively starved of investment and regarded as expensive.

The strategy document proposes up to 8 new reactors –  which will cost a total of £13 billion.  Nuclear power is prone to cost overruns. Decommissioning is expensive and difficult,  and the energy produced is up to four times  the cost of wind per MWh.

The Scottish Government can refuse planning for nuclear plants in Scotland – but Scots will still be charged through their energy bills for investment in this risky prospect. The Nuclear Energy (Financing) Bill completed its passage through the House of ‘Lords’ in March. This enables the UK Government to get consumers across the UK to pay at least £80 a year per household for its costly folly.

The document also repeats the myth that wind is not a good basis for an electric grid – a claim that has been repeated by journalists such as Kirsty Wark on Newsnight, Glenn Campbell on BBC Scotland and many others. Several reporters have repeated the assertion that Scots would have to depend on nuclear power from England “when the wind doesn’t blow”. According to research from Yale University, the most reliable grid in the world is the German one, which is substantially based on wind.

There are now many ways to even out supply – including pumped hydro which Norway uses. Scotland has been deprived of market incentives by the UK regulator which is why it lags behind in this area. Other emerging technologies to even out peaks and troughs in demand and supply include a molten salt system being pioneered in Malta. But investing in smart grid technology is of central importance.

Scotland has enough wind, solar, tidal and hydro energy for all of the country’s needs and more – eventually offshore wind alone could produce enough electricity to power 17 million homes. But it needs investment in the right areas to realise the huge potential Scotland has to become a renewables powerhouse.

Instead of what might be termed its “robber baron” strategy, the UK Government could have put in place a national response to the energy crisis involving a massive, well-funded effort to deliver energy efficiency and reduce people’s bills immediately.

The UK’s energy strategy is full of political choices.

Scots are given no choice about accepting the terms the UK Government has offered even if they are distinctly unfavourable to Scottish economic interests and are not in line with Scottish priorities.

Independence becomes ever more urgent for people who care about the climate emergency, who want to address fuel poverty and who want to build a strong economy.