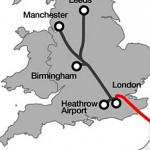 How do you feel about high speed rail?  Easy question to answer if like me, you have travelled across Europe on high speed trains you will probably say “Yeah they are great”. Now ask yourself, how do you feel about Scotland having to stump up at least £5,000 million for a transport project that not only comes nowhere near Scotland, but in reality will damage our economy?

I am off course talking about HS2, the humungous white elephant transport project costing at the very least £50,000 million pounds to build a high speed train service between “London and Birmingham and Manchester / Leeds. It was originally due to come to Scotland but as costs spiralled Westminster decided that it was too expensive to connect us restless natives with London.

The Scottish Government has suggested that if the project is to have any economic benefit it should start in Aberdeen. I see their point, but can’t agree with it. Firstly the east coast rail line in Scotland is awful; where else in the world would you see a major financial capital such as Edinburgh have such poor links to a global energy capital such as Aberdeen (and Dundee and Perth)?  The Scottish east coast line is so wobbly that trains have to slow down as they roll side to side on some parts of the line. Station platforms are so small that larger trains can’t open all the doors so we have crowded little trains. We need investment in that line now, not in twenty years, we need to connect Glasgow, Edinburgh, Dundee and Aberdeen with upgraded train service using current technologies; it will be cost effective and provide significant economic stimulus through construction and then through increased connectivity.

The Westminster Department for Transport had previously used selective extracts of a study by KPMG stating the UK economy would gain by £15 billion a year from HS2 and the greatest benefit would fall to Greater London (£2.8bn per year) and the West Midlands (£1.5bn per year).  However, the full report was released after a Freedom of Information request and it made it clear that other regions will lose out substantially. The report that Westminster wanted to keep secret clearly stated that Aberdeen’s economy will lose out as a direct result of HS2 to the tune of £220m a year and Dundee by a further £96m – not one off costs, but every year on going. This means that Scots will lose their jobs as a direct result of the economic contraction in the Scotland’s north east caused by HS2.

A direct quote from the KPMG analysis paper: “All direct train services to London starting North of Edinburgh will be cancelled”. Ironically this means HS2 will actually lengthen the time it takes to travel by train to London for many Scots. Travellers from Aberdeen will have to change at Edinburgh and then again at Manchester or Leads to use HS2 to get to London, adding up to an hour to travel times. This is entirely unacceptable and offers documented proof that the economic plans made in Westminster are tailored almost entirely to London and the South East, often against Scotland’s competitive interests.

The estimated cost of the project rose from an initial guess by Westminster of £25bn to £48bn last year,  the well-respected Institute of Economic Affairs (IEA) predicted the eventual cost will be upwards of £80,000 million. My own investigation found that they forgot to add in the cost of specialist running stock, so there is another £5bn for you. Now the costs are predicted to be £50bn, and we all know that the costs spiral faster when the work actually starts – trams anyone.

This week the House of Lords Economic Affairs Committee stated that: “The government has no convincing case for spending £50bn building HS2.” So who on earth gave the project the go ahead thinking it would only cost £25bn in the first place?  Well the Chancellor at the time was Alasdair Darling, what does he think about it now?  Last year, during the referendum campaign, he made a complete U-turn saying: “It is time to revisit the case for HS2. It runs the risk of substantially draining the railway of money vital for investment over the next 30 years.” Yup, that’s a first; Darling and I agreeing on something!  My old Nemesis Lord McFall, who nearly had a fit on Scotland Tonight when I put him right on the “UK bailed out the Scottish banks myth”, commented: “We’re against the government initiating public projects at £50bn without adequate assessment against their objectives.” So will Labour be cancelling this folly of a project if they get in? In a word No.

The economic justification for HS2 is fundamentally flawed; it’s based on multiplying the minutes saved by the estimated amount of business people expected to use the service and by how productive they would be if they were at their desk rather than travelling. Ten years ago, before I could use my 4G phone as a wifi hotspot and a laptop couldn’t be plugged in on the train, I would have paid extra to knock an hour off my journey, but not nowadays. So how did the UK Government work out the amount of people willing to pay extra to travel on HS2? They did it by taking a 2003 business traveller survey and updating it for inflation, a survey twelve years out of date.

There is an argument that the Barnett Formula will give Scotland a little extra transport cash due to the huge spend south of the border, but as HS2 spirals towards £100 billion I think Westminster will see it as a case study for scrapping Barnett. There are arguments that if HS2 started in Scotland it would be a huge benefit to us, but then there is no way on earth such a move would ever get through Westminster. If HS2 wasn’t London-focussed the project would sink like a stone.  One might even wonder if the SNP know that.

And finally, if HS2 did start in Scotland we would end up with the full Scottish bill, after all we will be independent by 2020.  Lets scrap HS2 and start thinking about an integrated economically and environmentally sound transportation strategy for an independent Scotland – now.