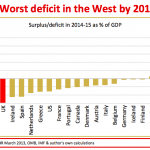 Better Together still talks about Scotland being safer within the strong UK economy. However, the facts show that the opposite is true. The UK economy is almost on its knees. George Osborne has been keeping up the pretence of his predecessors.

As the attached graph shows, despite “austerity measures” being put in place by the Coalition Government, the UK national debt has continued to rise even faster since they took office. They inherited a national debt of about £700 billion. Today it is over £1 trillion and rising more steeply. The figures are sourced from www.ukpublicspending.co.uk . This is the black hole into which Scotland’s oil wealth has been poured since the 1970s.

A recent paper by Professor Brian Ashcroft of the Fraser of Allander Institute stated that had Scotland been independent over the last 19 years Scotland would have had a surplus of £68 billion. Assuming a modest interest rate on such an oil fund would have taken it up closer to £100 billion. It is not in the same league as Norway’s sovereign wealth fund although we clearly could have had one of those for ourselves. However, it would have been a great nest egg for Scotland and our people.

Only Ireland and Japan have greater debts than the UK as a percentage of GDP. In Ireland it is six and a half times GDP. In Japan it is 5 times GDP and in the UK it is almost 500% of GDP. In Europe the countries we think of as being almost bankrupt actually have much lower percentages of debt than the UK. The Greek debt is only about 300% of GDP. The sources of the data are Haver Analytics; Bank for International Settlements; national central banks; McKinsey Global Institute.

Scotland’s share of the UK national debt would probably be about £80 to £100 billion. It is obviously up for negotiation. However, our national debt would be well below our GDP of about £151 billion (from the 2012 GERS report). In addition, it should be said that Scotland would be entitled to our share of the UK assets. Some of those assets we may choose to sell off, for example our share of some of the more exotic embassies, the British Library, The Victoria and Albert Museum, to name but a few. Scotland’s share of some of the large pieces of UK military equipment is also worth tens of billions of pounds. By doing so we would be able to pay down our national debt.

Scotland has a lower deficit and a higher tax take

Both the UK and Scotland currently spend more than they take in taxes. The UK deficit is 7.9% of GDP. Scotland’s deficit is only 5% of GDP. However, it is interesting to note that last year Scotland’s deficit of £7.6 billion was in a large part due to the £4.1 billion we were charged for our share of interest payments on the UK national debt.

As has been reported this week, there is a surge of investment within the North Sea. The UK Oil and Gas Association now expect investment to be about £100 billion. It will produce more oil and gas due to new fields being exploited and due to improved technology in existing fields. That is more good news for Scotland and our expected revenues for a Scottish finance minister.

In addition, economic policies designed for Scotland, within Scotland (not for the SE of England) would ensure that the Scottish economy would thrive after independence. The sooner Scotland escapes from the UK, the better for Scotland. The UK’s time is running out. We’re not ‘better together’: the UK is a burden holding back Scotland’s development.

Over the last 18 years Donald Maclean has built up the largest Scottish utility consultancy, Business Cost Consultants. He sees himself as a bit of a Scottish Robin Hood; he enjoys battling with large utility companies to win cost reductions and rebates for his clients.