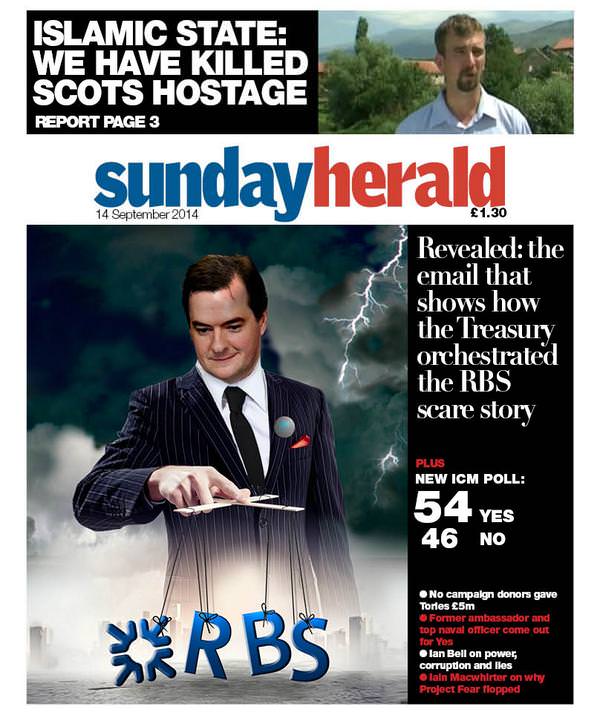 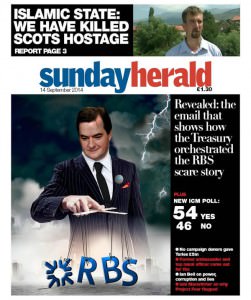 David Cameron, after deciding to stay out of the referendum debate ’til the last few weeks, has suddenly realised the result is running away from them.  In what was described in the media as a “panicked move” he and the other Westminster political leaders abandoned Prime Ministers Question Time (PMQs) to campaign in Scotland.

He was quoted as saying he will “strain every sinew” between now and then to make his case for the union.  A more accurate quote would have been that he and the Westminster machine would “pull every string” available to the Prime Minister’s Office including pressurising all their friends in the London business community to lower Scotland’s aspirations to be a self-governing country.

Having spent two years solidly promoting scare stories to the people of Scotland and completely failing to share any positive vision for Scotland’s future the No camp now seem to have moved on from scare stories to “prophesies of doom” and attacks on Yes staff or supportive business people.

The strategy has also backfired because it invites a clear comparison between the London based Westminster-connected business people who fear positive change for Scotland and those major business people who cave come out for YES who are Scottish based and care most for Scotland such as Sir Brian Souter, Chairman of Stagecoach plc, Jim McColl OBE, Chairman and CEO of Clyde Blowers plc, Mohammed Ramzan, Chairman of United Wholesale Grocers, Marie Macklin, Chief Executive of Klin Group, Doug Duguid, CEO of EnerMech and most recently former Tory donor John McGlynn, Founder and Chairman of Airlink Group.

Why people should reject the co-ordinated negativity from Downing Street friendly business people.

John Lewis is a company that we have been complimentary about on this site. As a member owned co-operative Business for Scotland sees real opportunity in the co-operative model as a tool for sustainable economic development in an independent Scotland.  However, its boss Sir Charlie Mayfield jumped in to help out the No Campaign by making a political and controversial statement about the possibilities of a price rise following a Yes vote.

This is despite the fact that this ridiculous scare story has already been dealt with in our blog here and on BBC Radio 4’s Today programme.  Essentially what you need to know is that although companies may decide to price differently, competition will keep prices down and an independent Scotland would have the powers to increase competition. Morrison’s has also said prices “could also go down” and Tesco has stated that they “have a great business in Scotland and will continue to offer the best prices whatever the outcome of the referendum”. In many respects it is the best example of a scare story gone wrong.
So what makes us think Sir Charlie Mayfield has links to the Downing Street? Well he is actually on the UK Government payroll. We understand that he receives £35k a year for the part time job of Chairing the UK Commission for Employment and Skills (UKCES). Nice job if you can get it. (See p17 of their annual report)
Sir Charlie has an additional problem. The John Lewis Partnership, being a co-op, has a constitution which states:

“On taking office, the Chairman makes a written undertaking to the Partnership Council, as follows, that:

(i) he will uphold the Constitution and work to the utmost of his energy and ability for the fulfilment of the Partnership’s principles;

He has just stated that the company will be Knowingly Undersold!

(ii) while in office he will not accept any paid employment or any other position of official responsibility, either public or private, without the agreement of the Trustees of the Constitution (who act on behalf of the Partnership Council and must inform the Council of their agreement);

Let us assume he did get permission.

(iii) He will be impartial and reticent in political and other matters which do not directly concern the Partnership and which may be controversial;”

Well, he has been highly political and controversial and not at all reticent to get involved in politics which does not directly concern the Partnership:

Likewise, Kingfisher (B&Q) boss Ian Cheshire has made remarks about raising prices. We have found out he is a leading non-exec member on the Department of Work and Pensions Board:  he was also appointed directly by Prime Minister Dave Cameron alongside Marks and Spencer’s Marc Bolland (another London insider) to draft a report into cutting EU red tape:

So “Westminster insiders co-ordinated by the UK Government to back No camp scare stories” should have been the headlines but instead the Westminster friendly media ran with the scare story version of events.

There are exceptions of course.

Well done to the Sunday Herald for pointing out that Westminster is co-ordinating the big negativity push. And James Cook of the BBC for speaking up about receiving the Treasury email on the RBS scenario planning before its Board had even finished meeting to make a decision. There is further evidence that a journalist at the Sun UK was given an even earlier heads up.

Cook was interviewing Scottish Tory leader Ruth Davidson, who said the information had only been released to journalists who had requested clarification, Mr Cook interjected: “Just for the record, I received that email and I didn’t request it”.

How can anyone believe a word the No campaign says from now on?

This leak broke the law and meant the media was aware of commercially sensitive information before the shareholders were informed through a proper stock exchange announcement. The share price was also affected which makes it all the more serious.

These actions are desperate, panicky and shady dealing and will no doubt be investigated by the Police and wider prosecution and regulatory authorities. We cannot have one rule for business in dealing with shareholders and another for politically motivated Treasury officials.

The resultant media coverage stated that RBS may move to London and raised the prospect of job losses.  However, this scare story crumbled the very next day when Business for Scotland (amongst others) published the apology letter from RBS CEO Ross McEwan to his staff which stated emphatically:  https://www.businessforscotland.com/rbs-ceo-tells-staff-zero-rbs-job-losses-when-scotland-votes-yes/

“This is a technical procedure regarding the location of our registered head office. It is not an intention to move operations or jobs”.

If you are still in any doubt about the collusion and the lack of sincerity in these co-ordinated scare stories then don’t just listen to me, take it from Financial Times editor Lionel Barber who said on the Today Programme that business leaders had to be pressured to get involved in politics, and they were pressed by Downing street and senior civil servants as polling day drew closer and the polls tightened: Barber said “Mr Cameron and the Cabinet Secretary Sir Jeremy Heywood has been on the phone saying, ‘will you please speak up?'”

Lets be clear civil servants are obliged to be politically neutral and Sir Jeremy has clearly, according the FT editor, been breaking the rules, just as they did when releasing RBS scenario planning information to the press. This is totally unacceptable and must again be investigated.

The No Campaign has nothing to offer Scotland except a timetable for limited economic powers it can’t guarantee and won’t be used to do what independence can – create  jobs. The No Campaign has no positive plan for Scotland and if all they have to offer is fear and co-ordinated negativity then they don’t understand the hard working, decent and canny people of Scotland.

The No Campaign is trying to make the people of Scotland lose sight of the social, economic, environmental, and economic opportunities of all time by exaggerating technicalities and manipulating business to speak out with nonsensical scaremongering.  In truth, however, it all boils down to this simple question: who is best placed to make the decisions that the people of Scotland want to see implemented: a Scottish Parliament that is close to the people and engaged with our lives, hopes and inspirations or a distant, disinterested and dysfunctional Westminster Parliament that can’t give us a positive reason to vote No?