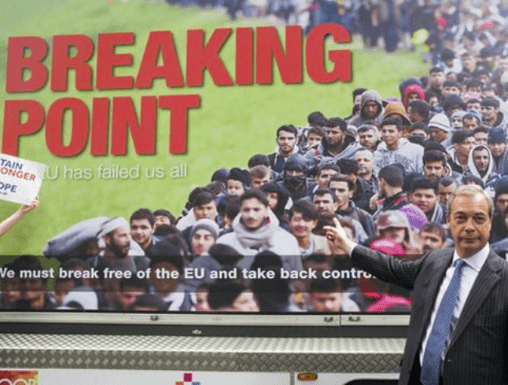 Until last week Vote Leave have steadfastly refused to say if they plan to do a post-Brexit UK/EU trade deal, but falling share prices and a weakening pound (possibly caused by Remain scaremongering) have forced their hand.

They have been stressing immigration controls and creating an atmosphere of anti-European xenophobia and it has been working. In the last few weeks undecideds have been moving towards Leave and older voters are becoming more Eurosceptic, and they are far more likely to vote than the more pro-EU young people. A few polls over the weekend showed a fightback for Remain in the wake of the Jo Cox tragedy but today new polls show Leave ahead again. UK-wide the EU referendum is a dead-heat in polling terms.

Cameron’s rerun of the indyref pensions scare-story and many of his big business friends and self-interested political figures issuing dire economic warnings has been uninspiring and if anything undermines support for Stay in Scotland.  It’s a simple playbook, we have seen it before, but, unfortunately for Cameron, so have Vote Leave and just as Leave stole the momentum with its immigration points system, last week they issued a post-Brexit Queen’s speech-style plan to derail Cameron’s uncertainty machine and in doing so may have accidentally lit a fuse under the Scottish independence debate.

First, let’s examine what they said, why they said it and how it’s flawed: Vote Leave published a plan for six parliamentary bills that they say will pave the way for a smooth transition to a Brexit after a Leave vote on June 23.

They claim this emergency legislation would quickly redefine the relationship with the EU and address immigration, freedom of movement (for us as well I guess), and curb the power of the European Court. This will speak to the old folks and Euro-sceptics and although there is plenty to worry about for business in a Brexit this smoke-and-mirrors plan could make it look like there is less uncertainty involved – on the face of it, they are Brexiters with a plan.

They also seem to think they can get around EU Article 50, which states that a leaving nation has two years negotiate an exit and presumably to do agree a trade deal with the EU. Simple, they say, Cameron just doesn’t enact Article 50 and then begins negotiations for a UK/EU trade deal, triggering Article 50 when the deal is done and so they predict the deal would be concluded by 2020. However, there are two gaping holes in the plan – firstly, that the EU will likely consider Article 50 to be enacted the minute the UK starts to negotiate an exit and with many of the conditions for EU membership now broken the EU would be duty-bound to act against the UK and some hardliners will call for the UK to be thrown out without a deal.

Also, we shouldn’t forget the £4.9 billion rebate which is the portion of our membership paid for the UK by other nations to encourage the UK to stay – once the UK votes out and starts to break multiple treaties the rebate-paying nations cannot be bound to maintain those payments.

“Dear France, I know we are leaving and no longer follow the same rules as you and have stopped your people crossing our borders without a visa but can you just pay £1.5 billion of our membership for us whilst we mess you around for four years?” … “That’s right Italy, £1.2 billion from you…” There is a good chance that the UK’s EU membership fee would go up by nearly £5bn a year for those four years till the deal is done.

However, all of this pales into insignificance versus the implications for Scottish independence were this deal to be implemented and agreed to by the EU. A Brexit against Scotland’s wishes would be one of the potential triggers for a second independence referendum. However, this would have to be accompanied by an increase in support for independence, probably driven by a growing dissatisfaction with Scotland’s democratic deficit versus England, the likely takeover of the Tory majority government by Boris Johnson and his team of more right wing and completely disinterested in Scotland hangers-on and, as Lord Owen speaking for Vote Leave predicted, the likely renegotiation of all devolved powers and the end of the Barnett formula.

Now we know the plan is to do a post-Brexit EU trade deal, independence has become far more likely. Without a trade deal the UK would be Out and following World Trade Organisation rules, leading to EU tariffs on Scotland’s exports which would hurt our manufacturing and food and drink.

The other problems with the WTO approach would be that if Scotland became independent from a “post-Brexit WTO UK” while retaining EU membership then our trade with England might also be subject to tariffs, thus undermining the independence cause.  Also, no trade deal would mean having to hold and win a second independence referendum within two years – not a timetable that benefits a Yes vote. That is why the SNP say a second referendum requires sustained support for independence – even though the less strategic-thinking Yes voters have been throwing their toys out of the pram on social media – is the real trigger, as we can’t and won’t risk losing again. However, if 2020 is the date by which Scotland would have to hold a second indyref then that timing looks good for independence.

Firstly, a four-year run-up while the UK self-destructs would mean time to win people over and apply the lessons of 2014. Secondly, May 2020 will see a likely new Tory majority under Boris Johnson, for why in the middle of a trade negotiation would the UK fire its negotiation team and hand the UK over to what Brexit voters largely see as an unelectable lefty in Jeremy Corbyn? A referendum in September 2020, six months before the Scottish elections with Labour sharing a platform with the Tories again would be electoral suicide and so Better Together would be a Tory led campaign and the uniform press and media support for No would repeat.

Finally, now that we know the Brexit camp expect to do a Norway-stye trade deal we also know that if Scotland becomes independent and is either a full member of the EU or has its own Norway-style deal negotiated ahead of the second independence referendum, then our trade, economic success, freedom of movement, etc, would all be protected. All the Project Fear uncertainty claims such as “there will be border controls”, “you won’t be in the EU”, “you will have to join the euro”, etc, would all be sorted before we call the referendum. EU membership or even EFTA membership tackles most of the scare stories about separation and isolation and that is why the SNP support EU membership.

Accidentally or not, Vote Leave just opened the door to Scottish independence: if England vote to Leave and Scotland votes resoundingly to Stay (60%+) we can use that to drive Yes support to the required levels. Any independence supporter in Scotland who votes to Leave is now voting against the only scenario that makes independence within the term of this parliament likely.

You might also be interested in: A forced Brexit changes Scotland’s constitutional debate | The EU is a Huge Economic Opportunity for Scotland and its SMEs