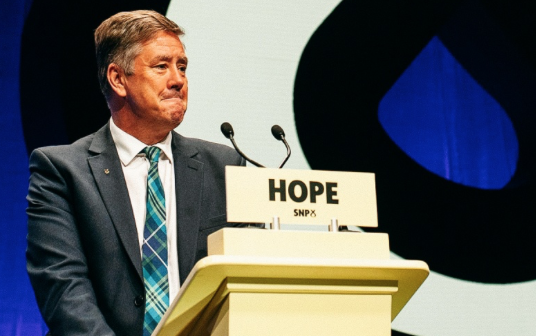 The Edinburgh Evening News and others published an article with the headline ‘Poll: 1 in 3 Scots say there should never be a second independence referendum’. The Dundee Evening Telegraph doesn’t do much better telling the same story with the headline “Blow for SNP’s independence hopes despite poll lead”, Others ran with headlines along the lines of “32% don’t want a referendum”.

Now, this is obviously supposed to be presented as bad news but clearly, it’s not an unreasonable assumption to draw from that headline that 66% of Scots, minus the undecided, actually want a second independence referendum.

The article refers to a poll done by the Daily Mail reporting that when they asked 1,000 people from Scotland if there should be another referendum,

And the paper leads with ‘Poll: 1 in 3 Scots say there should never be a second independence referendum’, which is clearly the least newsworthy element of the poll.

Of the 60% who support a second independence referendum:

So although some people may be in no rush to hold the referendum there is a clear majority for one, and some wanting to wait a few years may actually be independence supporters thinking they will be more likely to win by then. I would suggest it is a lot easier to convince people to agree the date of a referendum should be brought forward than to convince them that we should have one that they don’t want.

The article also points out that in Holyrood voting intentions for the SNP have opened up a 19% lead on the Conservatives (in second place) and that, between the SNP and Greens, the pro-indy Holyrood majority would be maintained.

I know from personal experience that columnists and article writers don’t always get to choose the headline, but this one is almost comical in its detachment from reality and from any intelligent analysis of the content in the article. The poll itself, which was commissioned with multiple answers to spit support for a new independence vote, is pretty desperate stuff.

How can anyone see the newspapers as anything other than political propaganda outlets that don’t believe in Scotland – they should be embarrassed.