THIS week has seen a catalogue of unionist policy failures that have gifted a hat-trick of opportunities to the SNP – if they are brave enough to take advantage.

Languishing in the polls, Scottish Labour have in desperation sought to re-establish their socialist credentials by committing to add a penny on income tax to pay for schools but it is an unworkable fudge of a policy. Income tax rises in Scotland have to be implemented equally across all tax bands and thus disproportionately punish those who earn the least. Labour say they will offer £100 cashback via local councils to low-paid workers, but how? Even if you could identify who to pay it to and had their bank account details, it can’t be a tax rebate or a benefit as powers to make such payments are not devolved. It would be classed as income and therefore taxed and count against other benefits – what an unmanageable mess.

Maybe Labour plan another of Gordon Brown’s omni-interventions to support the policy but when the SNP proposed a similar disastrous “Penny for Scotland” policy in 1999, Brown rounded on it, saying: “There is hardly a nurse, teacher, policeman, or council worker in Scotland who won’t be paying this tax increase. These are the very people the SNP claimed it wanted to help and instead they will be hit the hardest.” John Swinney won’t be shy to quote that in the coming months. 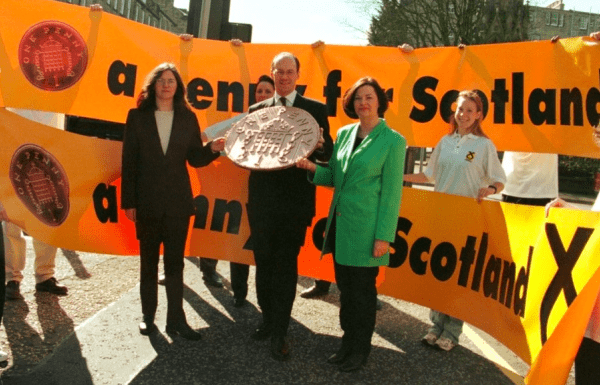 The SNP dropped their failed 1999 ‘Penny for Scotland’ policy

Bizarrely, the big picture on Labour taxation policy is even stranger. First, they campaign to stay in the Union promising Devo Max, then work against Scotland having full powers to vary income tax, then introduce a cack-handed policy to raise income tax with an unworkable cash-back element to compensate for not having the tax powers they themselves stopped Scotland getting. They then fail to support amendments on a fiscal deal that would ensure no financial detriment to Scotland’s block grant, thus effectively risking billions being ripped out of Scotland’s budget: cuts that would dwarf any additional revenue from a 1p tax rise. You could say Scottish Labour haven’t thought through their “Penny Dreadful” tax rise policy; you might wonder if have they have stopped being a serious political party and transformed into some kind of electoral suicide cult.

Cameron has opened another door for the SNP. His draft EU deal makes a June 23 EU referendum almost certain despite its unwise proximity to the Scottish Parliament elections. He clearly doesn’t want to give the SNP the time to champion EU membership and deliver a more substantial Yes vote in Scotland. He knows that Scotland voting to remain in the EU and then suffering a forced Brexit UK breaks a fundamental tenant of the contract Project Fear made with Scotland during the independence referendum and, as a result, justifies (in the eyes of most Scots) a new independence referendum prior to the UK leaving the EU.

Eurosceptics will see merit in concession gains on migrant benefits. However, all Cameron has is a guideline agreement which 27 other EU member states could veto at any any time. At best, this deal is another undeliverable vow that can be unpicked or vetoed before or after the EU referendum. This problem will be exploited by the Leave campaign which looks more likely to get stronger in England, while the Stay campaign looks set to win strongly in Scotland.

As he proclaims a victory with his red card system for resisting ever greater European union, Cameron ignores the irony that he has denied Scotland a red card on being forced out of the EU against our will. 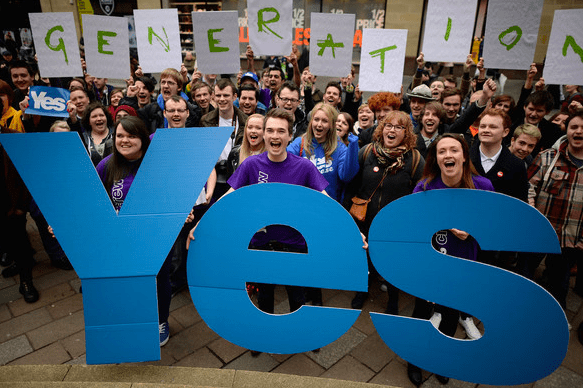 The demographics of support will see independence within a generation

Finally, the unionist strategy on the Scotland Bill is clear: put the SNP between a rock and a hard place on accepting new powers. They think the people of Scotland won’t understand the fact that the fiscal agreement has a financial trap that could rip billions from Scotland’s block grant. They think that the SNP have to accept what’s on offer or be the party that blocked new powers. They know that the SNP won’t really be able to use the hamstrung powers in the Bill and that would leave them open to accusations of inaction. However, if the SNP use the powers and Scotland’s block grant falls as a result, the unionists can claim SNP Bad, Devolution Bad.

Westminster may have completely misjudged the SNP’s competency and its resolve to stand up for Scotland as well the Scottish people’s political intelligence when it comes to the fiscal details within the Scotland Bill. People are beginning to understand that there are no real usable powers on offer on which Labour’s 1p tax rise has (helpfully) provided an ideal case study. If the SNP have the guts to show the Scotland Bill (with its current fiscal framework) the red card and argue that half-baked devolution at any cost isn’t worth the cost, they can then call for real devolution or nothing. That would be a gamble but it could redefine Scotland’s constitutional debate.

In the longer term, the demographics of independence support (younger voters want independence) will deliver independence within a generation but in the shorter term the 20 to 25 per cent of Scots who really wanted devolution but voted No in light of promises of more powers hold the key. 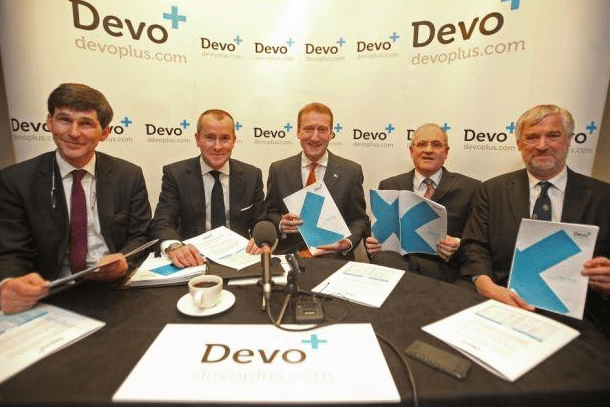 The Devo Plus campaign, an offshoot of the Reform Scotland think-tank

The Scottish people overwhelmingly support far more devolution. A 2014 Panelbase poll recorded as much as 66 per cent support for Devo Max; 71 per cent support devolution of all taxation; 75 per cent for control over welfare and the benefits system; and 65 per cent for control over pensions. There is also growing support for real control over a true and flexible suite of economic levers such as corporation tax (devolved to Northern Ireland but not Scotland), income tax, national insurance, inheritance tax and capital gains tax. However, If the Scotland Bill fails and especially if we are then forced into a Brexit, a clever move for the SNP might be to tell Westminster a new independence referendum will be called unless you immediately agree to the promised Devo to the Max. Such a deal would have a no-detriment fiscal clause that included insurance against future oil revenue volatility based on an acknowledgement of the £300bn plus historical revenues the treasury has already banked. If Cameron / Johnson were to agree, then we would have the tools to build our economy and be more ready for independence than Westminster has left us.

If he refuses then the supporters of devolution and the reluctant No voters may come to believe they have been sold a pig in a poke and our First Minister will have the 60 per cent plus support she craves as a trigger for a new referendum, even without a Brexit.

Leave a Reply to jimmock X