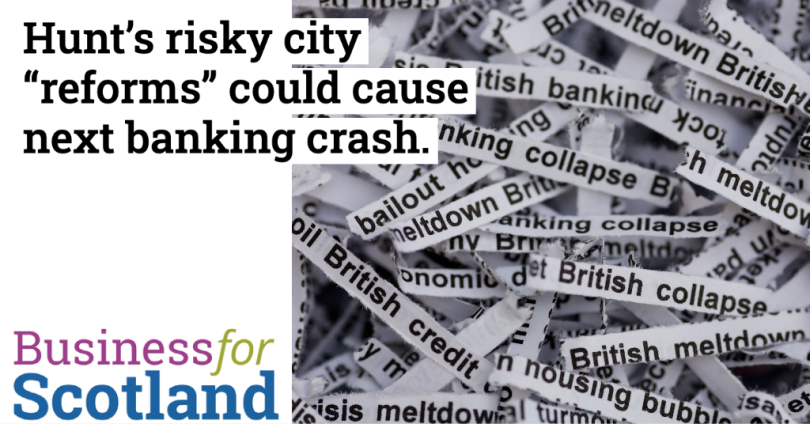 The UK Chancellor Jeremy Hunt is announcing some high risk deregulation of the banking and finance sector. Once called “Big Bang 2.0” he is attempting to rebrand it “the Edinburgh reforms” by dint of traveling north of the border to make the announcement.

These desperate measures are a response to the City of London’s post-Brexit weakness and have nothing to do with Edinburgh or Scotland – there has been no discussion about them with the Scottish government.

Many of Hunt’s weakening of financial regulations have nothing to do with Brexit, and those that do could further undermine the UK’s international reputation. Post-Brexit deregulation that has already been introduced such as abolishing the cap on bankers’ bonuses – has caused consternation from those who fear the UK is opening the door to risky practices like the ones that caused the 2008 banking collapse.

Sir John Vickers, who chaired an independent commission on banking, wrote in the Financial Times this week that a major plank of the reforms is either “pointless or dangerous”. He denounced the plan to give City regulators a new “secondary objective” of delivering growth and competitiveness, alongside their main role of ensuring financial stability and consumer protection.

The City of London is suffering a post-Brexit slump and is still dealing with the fallout from the Liz Truss mini-budget.  That is also affecting Edinburgh’s financial sector but it is very clear that Edinburgh, which was the most Remain city in the UK at 75%, is keen to be part of – and have a say in – the EU’s more stable financial regulatory regime.

These measures are likely to further damage the UK’s reputation. In a piece entitled ‘the false promise of a bank ringfencing boom’ in the FT, Helen Thomas argues that  “high standards and robust institutions are a competitive advantage for a jurisdiction”. Discussing the plan to water down protection for UK deposit-holders, put in place after the 2008 banking crash, Thomas writes:

“It seems there is no regulatory change too small or questionable not to be dressed up in the rhetoric of Big Bang 2.0 and Brexit dividends…this reform looks more whimper than bang.”

What are the planned changes?

Post-Brexit the City of London has suffered massive damage

The UK’s finance sector thrived under the stable regulatory regime of the European Union. Since withdrawing from the single market it has further damaged its reputation as a safe and reliable place to do business.

Scotland’s financial sector has suffered as a result of the hard Brexit that was forced upon the country despite, a strong vote to remain. But these desperate measures are unlikely to reverse the Brexit damage. As the Labour Party also supports Brexit they can only promise more of the same.

An independent Scotland would rejoin the EU and the single market and have a place at the table to debate sensible financial regulation that can inspire confidence.

Please support Business for Scotland and our Believe in Scotland Campaign