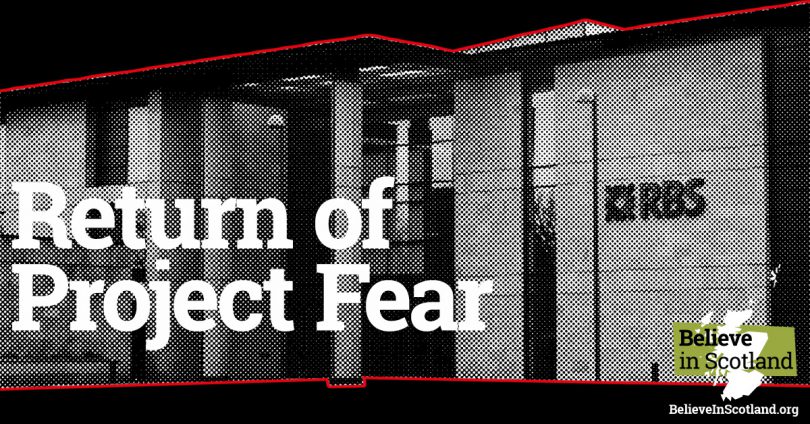 The media is reporting that RBS will leave Scotland if the country votes for independence.  There is one slight problem with the story – the bank has already left Scotland.  It is now owned by the UK government and says what the UK government tells it to say.

Here is our 12-point response to the return of Tory and Labour No Campaign scaremongering.

1. RBS is no longer the name of the corporation. The company abandoned the RBS title after an  internal change management project removed any last sign of RBS being Scottish. The company is now listed in London as NatWest Group. So it can’t leave Scotland again.

2. As Business for Scotland has reported many times, RBS moved to London shortly after the financial crisis of 2008. Its last two CEOs – Stephen Hester and Ross McEwan – were based in London. As is Alison Rose today.

3. NatWest retains a token brass plate at St Andrew Square as a small Edinburgh “registered office”. The vast majority of employees remaining across Scotland service the Scottish business and customers.  Neither Scottish independence nor the location of a brass plate would make any difference to the location of remaining corporate employees or the treatment of NatWest assets and liabilities. If NatWest is whispering otherwise to those employees it is being dishonest and people should question its motives.

4. Drive past either St Andrew Square or Gogarburn today and you won’t see the branding of the corporation, NatWest Group and that makes people think nothing has changed. However, the head offices in Bishopsgate, London, have been rebranded from RBS to NatWest Group. This is where the CEO works and both managing and supervisory boards meet (at least pre Covid virtual ways of working).

5. Despite the lessons of the Nick Robinson affair in 2014, Scotland has very few journalists with the time or inclination to properly challenge or research and contextualise the recent comments of the RBS CEO. Instead we get clickbait issued as quickly as possible on social media and websites to attract as much advertising revenue as possible.

6. As we have said, NatWest Group is owned by the UK government. As such, its CEO and board take direction from the Treasury in London. This has been proven time and again in reporting on the company since the financial crisis and its semi-nationalisation in 2008.

7. NatWest Group’s share price hasn’t grown in 12 years. The company has been shrunk to an almost lifeless zombie. Margins are improving in UK retail banking but it is a relatively small company now and remains a net liability for the UK government, which is why it hasn’t sold much of the UK shareholding, which includes the Scottish taxpayers’.

8. It’s possible NatWest Group CEO Alison Rose may simply not have been expecting the independence question from journalists, although there is a pattern of the bank’s CEOs being kowtowed into making anti-independence statements.  Let’s hope the company gives a more accurate, independent and objective answer next time it is inevitably asked the same question by journalists who ought to take professional pride in objective reporting. After all, the company has many Yes voting employees, as well as its fiduciary duty to non-UK government shareholders. These are not served well by unnecessary forays into politics.

9. The good news for Yes supporters is that there is little evidence that any of this Project Fear stuff changes a single vote. In contrast to the Vow in 2014, the scaremongering had little if any impact. Nevertheless, it is important to correct the record, so we at Business for Scotland will continue to do so.  The idea that the bank’s balance sheet is too big for an independent Scotland has two big issues 1) They must be assuming that the bank is not properly regulated and will once  again fail.  2) Banks are not bailed out by the nation they are headquartered in but by the nation where the business failure happens.  This is a myth we destroyed 8 years ago but the media ignores the truth.

10. Brexit has caused and continues to cause much more disruption for RBS and NatWest Group than Scottish independence ever could. We should remember that voters, including more than a few RBS employees who have lost their jobs since Brexit, were promised that the only way to remain in the EU was to vote against Scottish independence. We all know how that turned out.  It’s also worth mentioning that the leaders of Britain’s biggest companies (that are not owned by the UK government) are unfazed by the possibility of Scottish independence according to a poll by  Ipsos MORI. Perhaps NatWest’s senior management are just not as competent as most other big corporations?

11. On a more positive note, there is a real opportunity to carve out the Scottish domestic banking operations of NatWest following Scottish independence, or even as part of the negotiations between the Scottish and UK governments. As such, the Scottish financial sector could be strengthened by the inclusion of a private sector bank properly based in Scotland serving the interests of Scottish customers and making its contribution to Scotland’s economy alongside the publicly-owned Scottish Investment Bank.

12. Likewise, one silver lining of the Covid pandemic may be London-based companies like NatWest Group (nee RBS) locating more people and operations to Scotland. In many cases this is where employees want to be and savings can be made on higher London salaries. If RBS was majority owned by independent shareholders, its board and CEO would be under more pressure to consider such options.

When it comes to stories about RBS and Scottish independence, readers and journalists should learn to treat them with a bucket of salt. Or even better a smidgeon of balanced and professional reporting!