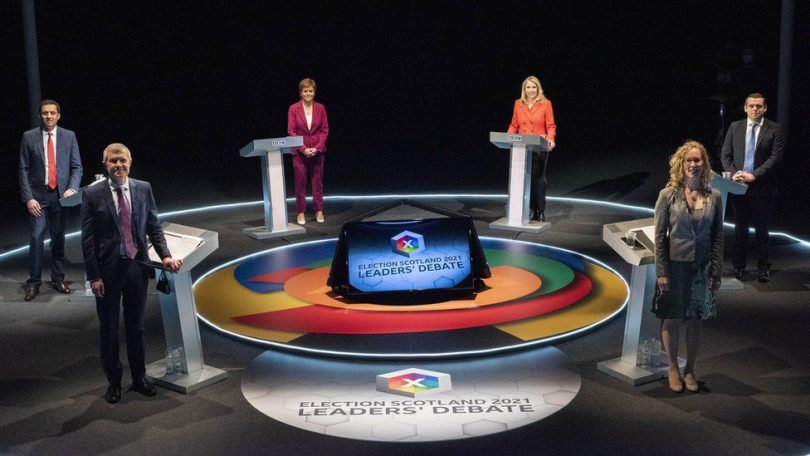 There will be the usual disagreements over who won the first TV election debate last night but there can be little argument about who was the loser. Scottish Conservative leader Douglas Ross was so obsessed with his hatred of independence that he couldn’t talk about anything else.

Eyebrows were raised in the opening stages of the debate when the BBC decided in its wisdom that three of the first five questions from audience members should attack the plans for indyref2 backed by the SNP and the Greens.

But the subject matter of the questions hardly mattered when Douglas Ross turned every one into an attack on Scotland’s right to choose its own future, describing it as bitterly ‘’divisive’’ and a ‘’distraction’’. Eventually even Scottish Labour leader Anas Sarwar lost his temper and told Ross to grow up.

That heated exchange came during a discussion on online abuse in politics. All party leaders agreed there was no place in Scottish politics for toxic abuse and all agreed to call it out whenever it erupted, no matter which side of the political spectrum it came from.

But it was Ross who looked ridiculous when he couldn’t resist the opportunity to blame the independence issue for encouraging abuse because of its ‘’divisive’’ nature. His comments at least served to unite the panel against him.

Sarwar had already attacked the standard of opposition provided by the Tories at Holyrood. The job of opposition, he told the audience, was to push for the ‘’best recovery and the best ideas to make us a better country but the Tories only want to talk about divisions and shout about the constitution’’.

Ross spent the evening repeating his ‘’divisive’’ claims ad nauseum. He also used questions on other issues such as climate change, Covid recovery and the NHS to launch increasingly bitter attacks on moves to hold a second independence referendum.

He was repeatedly caught out making serious mistakes. When he accused the Scottish government of ignoring important issues by concentrating only on independence Nicola Sturgeon was able to list a series of initiatives –  the Scottish Child Payment, the scrapping of business rates for the next financial year and the offer of a 4% wage rise to NHS staff – which improved on those south of the Border.

Ross looked even worse when he seemed to support the 4% rise for NHS workers – they have been offered only 1% by his boss, Tory Prime Minister Boris Johnson – only to backtrack by insisting that other workers had also gone above and beyond during the Covid crisis.

Nicola Sturgeon’s preference was to hold the referendum in the first two and a half years of the next parliament, if the pandemic fades enough to allow it

The debate was instructive in the way party leaders laid out their strategy on an independence referendum.

Nicola Sturgeon argued that it was essential to give Scotland the powers to put in place the right recovery plans after the pandemic had receded, rather than leave those decisions in the hands of a Tory government at Westminster that Scotland had not voted for. Her preference was to hold the referendum in the first two and a half years of the next parliament, if the pandemic fades enough to allow it.

Green co-leader Lorna Slater, who had a good debate, backed the referendum to give Scotland rather that Boris Johnson and Westminster control over its own future but supported the slightly longer time scale of the full first term of the next parliament.

Scottish LibDem leader Willie Rennie’s pitch was closer to the Tories, but he failed to cut through with any major points.

Sarwar’s tactics were to attempt to rise above the ‘’nationalist/unionist, Brexiteer Remainer’’ splits and focus instead on the ‘’issues that matter to people’’. The trouble with this position is it fails to tackle how Scotland can best recover from the pandemic if the major decisions are in the hands of Westminster.

Douglas Ross showed that the Tories have no positive messages on any of the election issues and are putting all their faith in being the party opposed to independence to a fanatical degree. His was certainly the most embarrassing performance of the night.

The big takeway from the first election debate was confirmation that we will be unlikely to see a united Labour/Conservative front against the rising tide of support for independence.

Sarwar has already ruled out Ross’ suggestion of an anti-indy coalition during the election. If this debate proved anything it is that the relationship between the two men is too antagonistic to even imagine that happening.