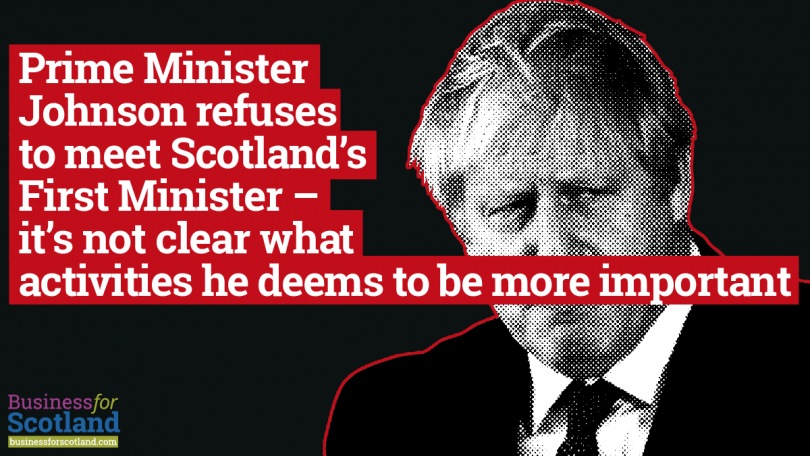 UK Prime Minister Boris Johnson will begin a two-day trip to Scotland today and we are expected to believe it will be so jam-packed with momentous events that he can’t spare any time to meet Scotland’s First Minister Nicola Sturgeon.

He can, however, squeeze in chats today and tomorrow with the leader of the Scottish Conservatives Douglas Ross.

This is a blatant snub to Scotland and its First Minister, who was returned to office just three months ago in an election landslide. To mark the visit we’re looking at this and other Boris Johnson insults to Scotland.

Nicola Sturgeon wrote to the Prime Minister inviting him to her official residence at Bute House during his visit to discuss the recovery from the pandemic. The invitation was made public on Monday afternoon and rejected yesterday.

Mr Johnson said he was “keen to arrange an in-person meeting” with all four UK First Ministers and – the insults pile up – suggested that Nicola Sturgeon could make do with Michael Gove instead.

He admitted there was  “much for us to discuss as all parts of the UK work together on our shared priority of recovering from the pandemic”. He then suggested meetings between the two governments were already taking place and said: ‘’I look forward to meeting with you soon and working together in the interests of people in all parts of our country.”

The Prime Minister’s full itinerary is not yet known so it’s not clear what activities he deems to be more important than meeting Scotland’s most powerful politician. So far we know he’s meeting police officers and visiting renewable energy projects later today.

Of course Mr Johnson’s stance has been supported by his acolytes in the Scottish Tory Party, who can never be persuaded to stand up for the country. In an entirely predictable statement Douglas Ross said today that the Prime Minister was right to reject a meeting with Ms Sturgeon

The Prime Minister is refusing to meet a First Minister whose party won 47.7% of the constituency vote and 40.3% of the regional vote in the 2021 Scottish election.

But he is meeting (twice) the leader of the Scottish Conservative party, which won just 21.9% of the constituency vote and just 23.5% of the regional vote. 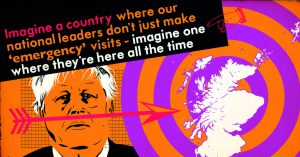 But then Boris Johnson has only the most tenuous relationship with democracy. Voters returned a significant majority of pro-independence MSPs in the 2021 election and yet the Prime Minister refuses to acknowledge this latest mandate to hold indyref2.

It’s not clear exactly what he would consider to be a mandate and when he thinks a second independence referendum would be appropriate. Cabinet Secretary Michael Gove’s most recent pronouncement suggests the Westminster government  will stand against it until the ‘’settled will’’ of the Scottish people supported it and until at least  2024.

What exactly the ”settled will”’ means and how you determine it is anybody’s guess. Of course this attempt to block any route to Scotland achieving its independence has no legal basis.

Scots are the most likely in the UK to think the coronavirus crisis has been handled badly by Westminster, to say that the pandemic has damaged their trust in the UK government, and to distrust Boris Johnson on issues relating to Covid-19, according to a study conducted in April this year.

The research, by the University of Bristol and King’s College London, revealed that 72% of people in Scotland say they don’t trust Boris Johnson very much or at all on issues related to coronavirus and how we should be responding to it.

It also showed that for 55% of the Scottish public the overall experience of the pandemic had decreased their level of trust in the UK government.

When it came to views on Nicola Sturgeon, two-thirds (66%) of people in Scotland trusted the First Minister on Covid-19. Even a cursory read of the survey findings suggests Boris Johnson has much to learn from a meeting with the First Minister.

The disaster of the Prime Minister’s last trip to Scotland

Boris Johnson last came to Scotland in January 2021, in a blatant breach of Covid travel restrictions.

Nicola Sturgeon said he should not come as the visit fell into the banned ‘’non-essential’’ category. The Prime Minister ignored her reservations and came anyway. Social media was full of comments by Scots furious at his decision.

During a previous Scottish visit by Mr Johnston in July 2019, when he accepted the First Minister’s invitation to Bute House, he left by the back door to avoid protesters.

Boris Johnson quotes about Scotland he might want to forget

1: Writing in the Spectator in 2005, Johnson said the prospect of former Fife MP Gordon Brown becoming prime minister one day was “outrageous”. He said he opposed it not just because he was a ”gloomadon-popping, interfering, high-taxing complicator of life”, but mainly because he is a Scot, and ”government by a Scot is just not conceivable in the current constitutional context”.

2. Mr Johnson oversaw the publication as editor of the Spectator of a now infamous poem which called for the “extermination” of Scottish people. The satirical poem, written by a magazine staffer and which has since been removed from the magazine’s archive, described Scottish people as “a verminous race”.

3. Writing in the Daily Telegraph in 2001, Johnson showed clearly that he was no fan of devolution. He wrote: ”There will come a time when the Scots will discover that personal care for the elderly is too expensive. And they will come, cap in hand to Uncle Sugar in London. And when they do, I propose that we tell them to hop it.” His more recent comments on the Scottish parliament suggest his views have not changed.