Following 1789, The French National Assembly was laid out with supporters of the King sitting on one side and those for the revolution on the other, thus the habit of dividing politics into opposing left and right silos was born. Initially referring to royalists versus revolutionaries (some would argue that still applies to a certain extent) it came to signify the difference between socialism and conservatism. It was a long time ago, 1789, and the world has moved on. Left and right were simple-enough labels back then but provide a woefully inadequate spirit-level for the problems and solutions of modern society.

Left and right sound like real choices but they are not. Such choices have the effect of making people feel as though they agree with the status quo, for both left and right are unreconstructed variations of the traditional political axis and are therefore inherently opposed to the new thoughts and new solutions that don’t fit nicely into the left and right boxes. The solutions we need are the ones required to solve the new types of social and economic problems that are emerging.

At one end of the old scale we have ultra-conservatives harking back to traditional Victorian values and unfettered capitalism, and at the far left Marxists, harking back just as far to a political mantra that also doesn’t work.

In Scotland, Yes/No has largely replaced left and right but that is just as tribal and no better in terms of progress and informed debate. Self-righteousness, faux indignation and mock offence, not to mention insults and profanity from all sides, simply means that those of no tribe, those whose votes decide everything, are not easy to convert to your way of thinking because they refuse to listen. If the new media is full of insults and petty arguments then the undecided are driven back to the mainstream media for their information. Everyone who feels the mainstream media are unfair should be working to make social media more friendly and welcoming, but many are not.

Left and right, Yes or No has become just as tribal and limiting to debate.

People think politics is boring but that’s because the media and politicians are promoting left versus right political and economic tribalistic mantras that should be extinct. No matter how bad the economy gets, blindly thinking that either left- or right-wing policies will sort it out is stopping us from considering if our political and economic model of left and right has actually run its course. Communism never worked and, without communism to keep it true, capitalism became consumerism, an economic system that values consumption and, through the provision of cheap and available credit, convinced people to live outwith their means.

People buying designer goods, cars they can’t afford and flashy phones on tick makes them feel successful but an economy based on consumerism fuelled by personal credit is best described as peacock capitalism: sure it looks good but if you strip away the fancy feathers it’s pretty much a turkey. Peacock capitalism relies on mass narcissism for growth; it’s more of a personality disorder than an economic theory.

Artificially enhancing consumer spending drives prices up and creates fake GDP growth that is borrowed against wages as yet unpaid or worse still wages hoped for and so our economy from the 90s onwards has morphed into the very definition of a Ponzi scheme. The fact that it hasn’t totally collapsed yet is testament only to fairly desperate measures ranging from bank bailouts, austerity and quantitative easing to unsustainable low inflation and interest rates. We need to accept that our world is teetering on the edge of economic and social collapse and our politicians are ignoring the signs, hoping they will go away. Calling for more socialism or less regulation now looks like arguing over what gear to select when your engine is on fire. We should now start to wonder if our political and economic models originating from the time of before the industrial revolution have a purpose in the modern world.

Capitalism has failed and needs to be reconstructed, our institutions re-engineered for the future. Trickle-down economics was just the latest trick to provide some sort of moral justification for unfettered greed – but, as we have all seen recently, excessive wealth doesn’t trickle down – it floods offshore. Shared prosperity on the other hand trickles upwards. If you allow everyone to earn a living wage or receive a basic income then more and more people contribute to the economy and to increasing tax revenues. If you free the market too much then it becomes easier to avoid taxes and to generate wealth through investments rather than real economic activity, so the new wealth is earned without requiring discipline or any great skill – and undisciplined and undeserved wealth is undermining the very fabric of society.

The mantra of the dominant neo-liberal intelligentsia is that the rich are not contributing enough to society because there are too many restrictions on their management of that wealth, but the truth is that they are not contributing enough to society because light-touch regulation makes it easier to make money by avoiding taxes and investing in financial instruments than it is to invest in the real economy. When mass wealth comes from unregulated global investment then the wealthy are loyal to no country.

If the politics and economics of the last century have no place in the new then we need a profound re-think. We need to redefine the goal of the economy, to find our true north, to focus on what we really value as a society and then we may find that left and right disappear and new policies, ideas and institutions are born that match the needs of both left and right. Basic income, for instance, appeals to the left as it attacks poverty and addresses inequality, and it appeals equally to the right as it cuts the welfare role of government significantly and allows more people to be economically active and increases the money supply to those who spend it in the real economy. 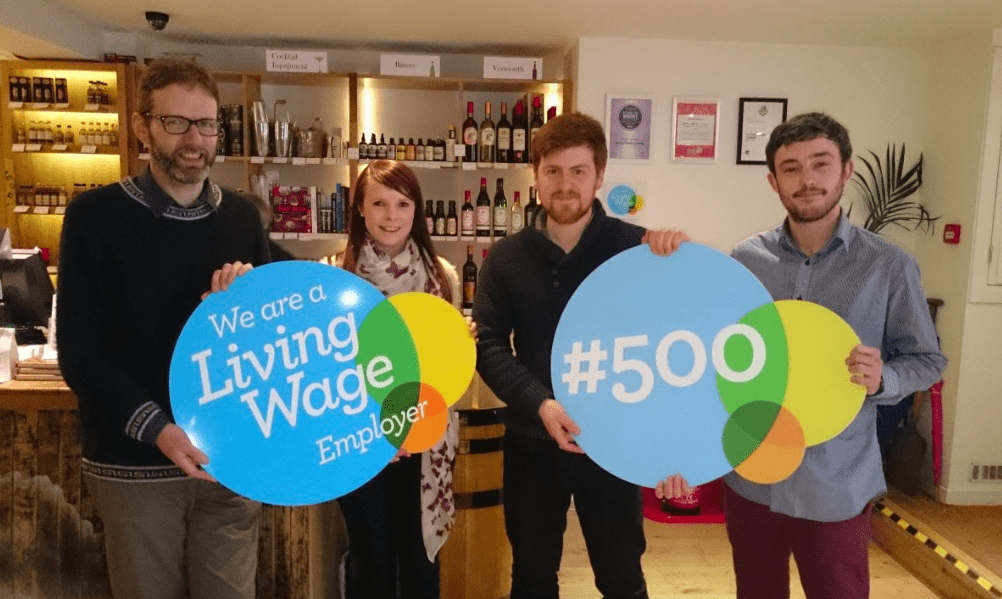 500 employers have signed up to the living wage in Scotland, policies that work for both left and right

A radical modernisation agenda would include ideas such as basic income, sovereign money, societal QE, localisation, co-operative ownership, worker democracy and shared prosperity as the key economic goal, rather than just individualistic wealth creation. The Living Wage, a shift in economic focus from big PLC- and services-led policy to added-value SME production would see the real wealth creators (SMEs) prosper. A move away from perpetual war (cold and hot) and power projection as a major force in economic policy, and a focus on sustainable growth for free markets, are ideas that are far too short-sighted to deal with global climate change without significant government intervention.

The golden age of finance has ended and there is a growing acceptance of the need for reconstruction of our economic model, to make shared prosperity the key economic goal instead of defending the outdated institutions that are blocking progress. A new school of economic thought is emerging, leading thinkers are promoting economic reconstructionism and, over the next two years, I predict that agenda will become more mainstream in Scotland over the next few years – ahead of the curve – simply as the people and politicians of Scotland are asking questions that are outside of the traditional sphere, especially the question what type of nation do we want Scotland to be?