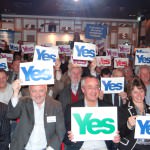 69 business people attended the Glasgow launch event of Business for Scotland. We now have over 1,100 members.

The No Campaign is panicking because businesspeople are not willing to publicly back its ridiculous scare stories.

The No Campaign is an alliance of special interests dependent on and built by special favours in a Westminster system that’s damaging for Scotland. David Cameron’s entire strategy is to scare people into missing out on the opportunities of independence for Scottish business, communities and the nation, without having to personally support the non existent case for a No vote in a debate with Alex Salmond that he knows he would lose.

Businesspeople have reputations to protect and often a fiduciary duty to investors. Even those who have not yet assimilated the many positive arguments for a Yes vote are more often than not unwilling to support trumped up unfounded No Campaign scare stories.

The latest plea from the No Campaign, including the CBI (an organisation that’s own membership does not support its CEO this issue), for business to join the self-styled Project Fear represents the latest in a series of misjudgements. All of which has led to calls amongst leading Tories for Alastair Darling to be replaced as leader of No Campaign. 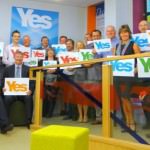 Hundreds of Business Ambassadors say Yes but have no one to debate against!

Business for Scotland, the pro independence business network and think tank, now has over 1,100 business members and signatories to its pro-independence business declaration.  Compare that to the handful of former political candidates, (mostly failed conservative candidates), or Tory donors relied upon by the No Campaign.

If a week is a long time in politics, then eight and a half months is long enough for the business community to be further won over by the overwhelmingly positive business and economic opportunities of Yes.

Businesspeople are rarely scared to speak out against politicians on any issue, especially those such as the ministers in the Scottish Government who have limited powers anyway.  It is unprofessional, desperate and counter productive for the No Campaign to suggest otherwise.  Far from reporting such claims, a credible an objective Scottish media should instead be satirising this unbelievable nonsense whilst highlighting the real story of the No Campaign’s failing arguments and strategy. 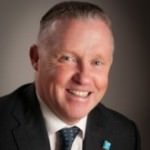 Tony Banks is the Head of Balhousie Care Group, Scotland’s largest independently-owned care home provider comprising 27 care homes and employing more than 1,000 staff.  Tony is also is a director of the Entrepreneurial Exchange and a director of Business for Scotland and a member of the CBI.

Tony says: “It is simply just not credible for the No campaign to blame its lack of traction with the business community on fear of the Scottish Government.  The CBI seems to have backed this unfounded claim but and its Director in Scotland does not speak for his members on this issue”.

“With only a handful of Scottish headquartered business as members the CBI has never asked its Scottish members (like myself) where they stand on the independence issue and would get a shock if they did”.

Five key reasons why business people don’t back the No Campaign:

The London centric metropolitan media, encouraged by the No Campaign spin machine twists everything that serious business people say. Earlier this month, for example, supermarket chain Morrisons was burnt when it was reported to have suggested food prices might go up in an independent Scotland. The company rebutted the press report amidst anger amongst senior executives that their words were twisted by the press and No Campaign. Tesco, Asda and Sainsburys also distanced themselves on and off the record from the story. Morrisons response even led to retraction reported by the Huffington Post (11 Dec) “Scottish Independence: Morrisons Says Food Prices Could Fall”, which states that: “Morrisons has become the first of the Big Four supermarket giants to suggest it could slash food prices in an independent Scotland.”

Furthermore, Morrisons went on to say it was “wrong” to say they were planning to hike food prices, with a spokesman telling the media: “If an independent Scotland increased or decreased regulation or taxes we’d have to take a second look at our pricing. Clearly that could work for or against Scottish customers depending on the direction of travel.”

2) The No Campaign will damage the reputation of businesspeople

Businesspeople have reputations to protect and most would not be willing to risk those reputations by backing ridiculous scare stories.  Meantime, there are more and more senior and very credible Yes supporting business people willing to argue in a professional, grown up and factual way against the scare stories that crumble under scrutiny. Few non-party political businesspeople are willing to enter a political debate in the media with nothing credible or positive to say, especially when they lack hard evidence, facts or figures.

There is no positive plan for Scotland after a No vote to which business can rally. Businesspeople, even those who would traditionally gravitate to the Conservative and Unionist Party, know this simply isn’t good enough. When faced with the detailed, fully costed and very positive plan for a better Scotland in the form of the ‘Scotland’s Future’ White Paper published last month, businesspeople are digesting a compelling business case for Yes.

3) The only source of fear for the business community is the No Campaign itself.

In order to cover up the fact that far more businesspeople are backing Yes, the No Campaign has put it about that business is being intimidated by the Scottish Government. However ridiculous they suggest to potential No supporting businesspeople that they will be bullied if they speak out.  Thus they undermine their own efforts to generate vocal supporters – silence becomes a self-fulfilling prophecy. Or at least and perhaps even better the No Campaign has an excuse for losing the battle! Maybe, just maybe, the real reason for an absence of No business voices in the debate is that Yes is slowly but surely winning over the business community.

4) Independence is much less of an issue to Scottish businesspeople than the potential Westminster exit from the European Union.

Most businesspeople are more worried about the London Government’s plans for an in/out EU referendum and the fact that UKIP led EU scepticism bordering on anti foreigner xenophobia in London and the South East will lead to Scotland being ripped out of the EU (against its wishes) after a No vote in September.

Even when the occasional serious and well respected businessperson like Rupert Soames of Aggreko speaks up for the No Campaign the professional and serious nature of their comments undermine the No Campaign’s scaremongering strategy.  When asked at the Scotsman Conference on Monday June 3rd how damaging independence would be for his business, Mr Soames responded by pointing out that the UK wide in/out EU referendum scheduled by 2017 and proposed by the No Campaign’s leaders at Westminster was far more dangerous to business and the economy:

“The prospect of not being part of the EU for foreign direct investment would be much more serious. I don’t see why somebody wanting to build a factory that had the EU as a major trading partner would put it in the UK, given that the terms of trade would be completely unknown. That would bring uncertainty and that’s why the quicker it’s resolved the better.”

5) Businesspeople tend not to back political campaigns that are beginning to fall apart. They back winners.

Everyone sees the polls getting closer.  The more people know the more they move towards Yes.  Many voters, not just businesspeople, remember the way the SNP campaign machine turned around a far larger Labour lead in the last Scottish Parliament election with only six weeks to go into a majority in the Scottish Parliament.  Business people know that the SNP is now joined in a positive alliance for Scotland by the Greens and Liberals and Labour for Independence as well sectoral interest groups like Business for Scotland and more recently Wealthy Nation, a high profile group of right of centre pro-independence campaigners. Yes is. in a better position as the turn of the year as the No Campaign panics.

Businesspeople are not afraid of Scotland’s democratically elected Government but they do fear being associated with an unprofessional, negative and scaremongering campaign that doesn’t have a positive plan for the country.

It may be true that business people are cautious about change but this does not mean they want to campaign for no change. They also recognise that change is a constant in life. As the positive benefits of managed reform become clearer and more and more businesspeople engage with the facts a steady flow of businesspeople towards Yes will continue in 2014.

Yes winning in debate after debate.

2) On Good Morning Scotland – Business for Scotland CEO, Gordon MacIntyre-Kemp calls of people to wake up to the opportunities of independence