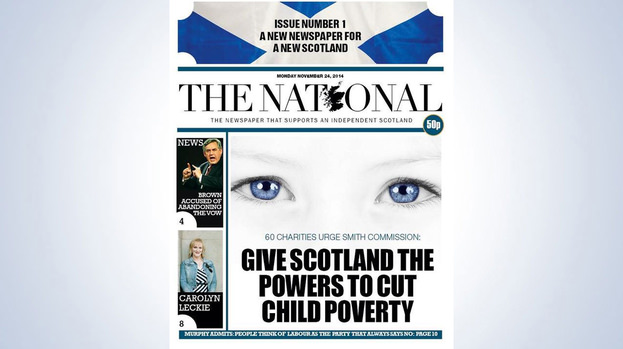 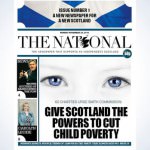 A new newspaper for Scotland launches today, it’s called The National and it is a significant development in news and political reporting in Scotland.  The new paper’s masthead says it all; a large saltire across the top and the tag line “The Newspaper that supports an independent Scotland”.

People rightly care about the freedom of the press, they care about freedom from government control over what is reported and that represents a major foundation of a functioning democracy.  The ability of the people through the press and media (The Fourth Estate) to access opinion that differs from Government propaganda so that they can question the validity of political claims should be a basic human right, not a privilege.  During the referendum campaign the Scottish press and the media let Scotland down and let down the democratic process.

The almost almost uniform, right wing, unionist take on every issue that the corporate metropolitan media presented created a wall of misinformation and one sided reporting that failed to challenge claims made by the unionist campaign.

Only the Sunday Herald declared for independence and, much to its credit,  has seen sales rise against a tide of falling newspaper circulations that some have predicted will lead to the end of print for all but a few national titles.  With 45% of the people of Scotland under-represented editorially in the national press, and as much as another 25% highly sympathetic to the independence cause, The National should be able to carve out a profitable niche for itself.  It’s not just about commerce though, this newspaper is the sister title to the pro-independence Sunday Herald and shares its editor in Richard Walker, so it is championed by a committed independence supporting editor.

The National deserves our support. Newspapers are commercial entities and good wishes won’t get The National past its first five day trial period – people need to buy it.  It costs 50p and is 31 pages long but will probably fill out once it becomes more established. Most new newspapers take a while and  redesign or two to get established, but I think it has made an excellent start.

Its striking front page today, reminiscent of shared editor Richard Walker’s Sunday Herald imagery, announces that 60 charities have urged the Smith Commission to give Scotland powers to deal with child poverty.  It’s a message that will strike a chord with far more people in Scotland than just those who voted Yes.  Far from being leftish in its leanings, I believe The National will look to strike that Sturgeon-esque care for those in need, balanced against the need to create a growing economy where we can afford the welfare policies of an enlightened caring nation and take people of poverty through redistribution of opportunity. This is further evidenced by the fact that I have been asked to write a column in a personal capacity for Friday’s edition.

The blanket unionism of the national media combined with the BBC’s inept and unbalanced reporting (mostly UK national driven) was nothing less than an assault on democracy. A much used cliche in Scotland nowadays is that we live in interesting times; well now we have a newspaper that seeks to report fairly on those interesting times and I urge you all to buy The National every day this week and tell others about it.

You can find the, as yet unfinished website, for The National here.