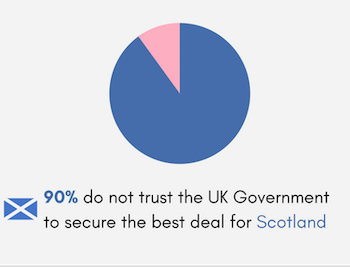 Business for Scotland has surveyed 758 business owners and directors across Scotland to map out the business community’s opinion on the ongoing the Brexit negotiations. This, our latest EU research report highlights numerous concerns, particularly from those employing EU nationals and those who either import from or export directly to the EU. 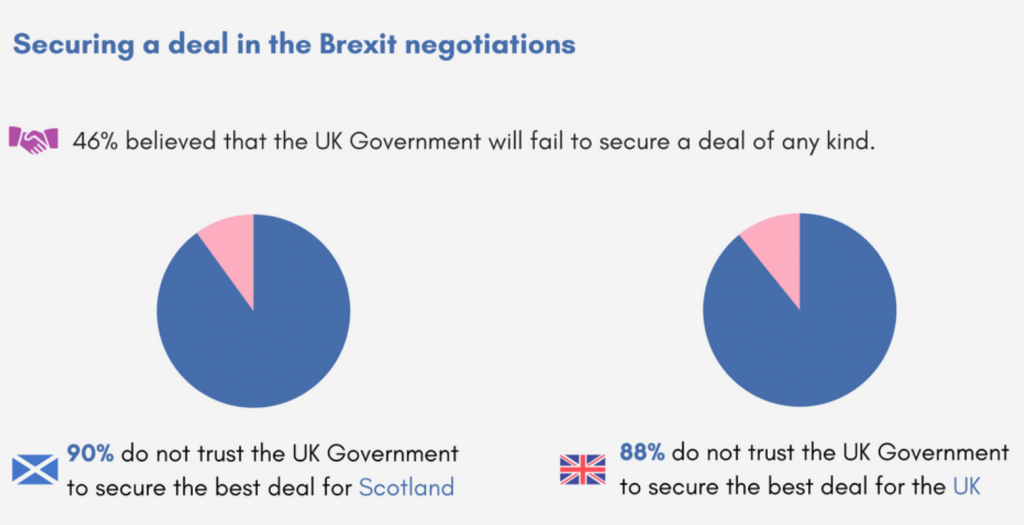 Summary: Only 8% of Scottish business owners trust the UK Government to secure the best Brexit deal for Scotland, and 79% want to see a second EU referendum after the terms for leaving the EU are clear.

Additionally, the respondents were asked if they believed negotiations would be more productive with direct involvement and representation of the devolved administrations – 77.98% said yes.

BfS CEO Gordon MacIntyre-Kemp commented: “We intend to repeat this survey periodically to keep track of business perceptions on Brexit negotiations as they progress but even we were surprised just how strong the feelings were on key issues such as a second referendum and how strong business support in Scotland was for remaining in the EU.

“It’s clear that there is an overwhelming lack of trust in the UK Government’s ability to secure a good deal, either for Scotland or the UK as a whole; a whopping 90% see a Brexit with no trade deal and WTO tariffs as having a negative impact on Scotland’s economic prospects.”

Respondents were asked “To what extent do you believe the following outcomes of the Brexit negotiations would have either a positive or negative impact on Scotland’s economic prospects?” Their answers were ranked on a scale ranging from ‘extremely negative’ to ‘extremely positive’.

90.19% thought a hard Brexit with no trade deal (WTO option) would have a negative impact on the Scottish economy.  With 68.28% selecting ‘extremely negative’, 15.26% ‘very negative’ and 6.65% just ‘negative’.  Interestingly, only 43% of those who would vote Leave in a second referendum thought a hard Brexit would be positive in any way, suggesting that a majority of Leave supporting business people at least prefer some form of softer Brexit, painting some level of access beyond WTO trading rules.
86% of respondents thought that Brexit with a preferential trade deal (Canada option) would be negative with 25% ‘extremely negative’, 42% ‘very negative’ and 18.88% just ‘negative’. Again, only 7.97% thought this type of Brexit would be economically advantageous in any way.
Opinion started to become less polarised when the option of a Brexit with an EFTA style deal to access the single market (Norway Option) was considered. Although the spread of answers was more equal, only 33.52% thought this would have a positive impact when compared to the other Brexit options. 43% still thought this would have a negative impact but 23.13% were neutral. It’s worth noting that some of the pro-Brexit respondents who thought the WTO option was positive started to rate that the softer Brexit options as bad for the economy, but their numbers were so small as to be statistically insignificant.
76.81% stated that calling a halt to Brexit would be positive for the economy, and within that 41.37% ‘extremely positive’.  However, 14.56% thought stopping Brexit would be negative for the economy and this included some Remain voting respondents whose comments can be summarised as;  it cannot be stopped now, as that would cause political uncertainty which would now be more damaging than a soft Brexit option.
Respondents’ comments

Common descriptors included “unplanned”, “shambles”, “shambolic” and “disgust”, but a number of respondents detailed why they were so concerned.

A director of FTSE 100 company commented: “When the virtually inevitable car crash happens the Scottish end of the business will most probably be moved to Europe which is a crying shame as the expertise at home is unsurpassed in our market segment. However with no likelihood of stability it will be a logical step to move.”

A director of an NYSE listed company with a base in Scotland said: “Stop now and ask the people, do they want to continue with this process, knowing what they know now?”

A senior manger of a global organisation with 800 employees in Scotland and 80,000 world wide said: “Appalling incompetence and condescending to the devolved administrations.”

The owner of a major hotel and leisure group said: “We need to retain our current EU labour base and allow additional EU nationals to join us.”

A director of a leading automotive supplier said: “Absolute shambles with no idea what they are trying to achieve or why/how.”

Access to both skilled and migrant workers is a major issue raised by others in the comments section:

As is the loss of EU funding for innovation:

For others, the concerns are around increased costs of business:

Opinion from Gordon MacIntyre-Kemp, CEO of Business for Scotland

“It’s clear from this survey that any kind of Brexit is bad for business and bad for Scotland.  The business community has been notably quiet on Brexit, but this survey has allowed it to find its voice; 90% do not trust the UK Government to secure the best deal for Scotland, whilst 89% don’t even trust the UK negotiating team to secure the best deal for the whole of the UK.

“No one knows what kind of Brexit we will end up with, or what level of access our businesses will have to the single market and that’s a problem for business. Last week’s contradictory and quite frankly impossible to implement so-called Brexit deal has just added to the confusion.  Business owners and directors are angry. Many commented that the referendum result was based on lies and they have labelled the Brexit process a shambles, and (excluding ‘don’t knows) 79% want a second EU referendum once the terms of the Brexit deal become clear. 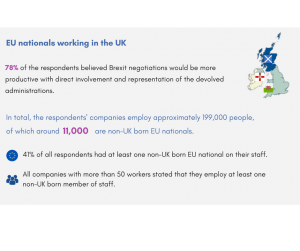 Business for Scotland wanted to measure how business people in Scotland felt about the Brexit negotiations and what the implications would be for their businesses.