The Supreme Court announced its decision this morning that there will need to be a vote in the UK Parliament before the UK Prime Minister can trigger Article 50 and begin negotiations to leave the EU. The 11 Supreme Court Justices voted 8 to 3 against the Government’s position that the UK PM could simply begin negotiations without referring to the Westminster Parliament.

This will however make no difference to whether the UK will leave the EU or not as English based Westminster politicians will undoubtedly by and large follow the lead of the referendum result in England and Wales. Scottish SNP MP’s will undoubtedly vote against leaving the EU. How the three representatives of the Unionist parties vote will be interesting. However, even with Green and Plaid Cymru a few Labour and Tory Europhiles and possibly Liberal Democrats there is not enough support to stop Brexit. Nor will there be a mood to enforce significant amendments to the Brexit Bill to bind the UK government to negotiating what could be described as a (properly) soft Brexit, sometimes referred to as a Norway style deal. One or two amendments may get through and if so they will be all important. For example, an amendment that might gain cross party support is to seek a deal that does not impose tariffs on exports to, and imports from, the EU. This is far more complex than you might think, as it will also bring into question whether or not the UK will leave the customs union, when staying in will restrict trade deals with other nations. Another will be to seek to guarantee open trade and borders and freedom of movement to Ireland. This is important to the Scottish independence debate as it would set a precedent for an open borders deal with any future independent Scotland. 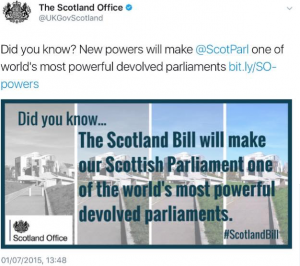 An early example of the alternative fact trend!

This combined with non-tariff trade with EU or EFTA members would mean an independent Scotland would have no trade barriers nor hard borders to deal with which would take away two major weapons of the No Campaign for a second independence referendum. This makes the Westminster vote interesting from a Scottish perspective as no borders and no tariffs make independence more likely, but a hard border with Ireland would make Irish unification more likely. The UK PM will be between a rock and a hard place on the future of the UK by the amendments on the Brexit Bill.I strongly suspect that amendments to refer any deal back to the UK Parliament after negotiation will fail on two fronts. Firstly there will be no time within the Article 50 process to do a second deal and if it were referred back, the EU would hold all the cards and that would create a constitutional crisis and trigger a General Election. Secondly, the EU may refuse to renegotiate and say that was your deal. After all, it is in their interests to do a deal and stabilise the EU. If the EU were to allow for a rejection of the deal, they would be bound to accept a UK back in that would be tearing itself apart on the EU issue and likely to hold another EU referendum within two or three years. The UK out, but with a deal that doesn’t harm EU trade is their only goal at this point.I suspect the SNP will table an amendment that will demand the devolved Parliament be consulted and that will be tactically interesting, as in all three nations those politicians who vote against that will be limiting their own nation’s say in the matter and thus limiting their own careers. However, such an amendment would be soundly rejected by English MP’s. Holyrood will however almost certainly hold a vote and everyone in Scotland will see that our opinions on the EU are not being respected and more importantly that Tory, and possibly many Labour MSPs, do not fight for Scotland’s democratically elected voice to be heard. The ruling that the Regional Assemblies will not have to be consulted, essentially means that the unelected House of Lords gets a say on Brexit but the elected MSPs don’t. How that undemocratic principle plays with Scottish voters will be interesting.

This is exactly what the Scottish First Minister will have been preparing for and will help people realise that independence is a viable option. Had she already called a second referendum then the political advantages for independence from this situation would be lost. Were there to be an amendment in Westminster stating that the deal has to be voted on in the UK Parliament, then the date of the next independence referendum may even move back further, to late 2018, or even early 2019 as you cannot hold an independence referendum predicated on a manifesto caveat that requires Scotland being pulled out of the EU against its will when there is still a theoretical possibility that Brexit can be rejected.In conclusion, we are still on for a March Article 50 trigger and a hard Brexit but possibly without tariffs – as such a mutually beneficial compromise can be reached as long as it doesn’t include full single market access for the UK.  Therefore, with EU membership, or single market access, the economics of independence will become highly desirable to businesses in Scotland and protect workers’ rights, salary and conditions and freedom of movement.

The economic case for the Union is unravelling. The First Minister would be well advised to let it unravel further before announcing indyref2 but that still looks likely to be in 2018.