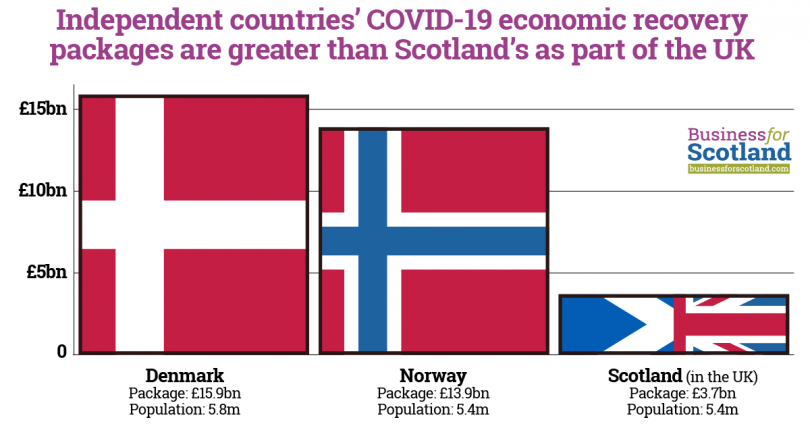 Throughout this global health crisis, it has become clear that small independent countries have been able to offer very supportive economic recovery packages. For example, Norway and Denmark, two of our closest neighbours which have similar population sizes to Scotland, have been able to source large sums of funding to deal with the coronavirus pandemic and restarting their economies.

Despite the UK Government claiming that being a part of the UK has benefitted Scotland during this time, we must consider the question: could an independent Scotland have been able to spend more on preventing the spread of the virus and supporting the economy than it has been able to as part of the UK?

According to the Scottish Parliament Information Centre (SPICE), Scotland, as part of the UK, has received a total of £3.7bn to help tackle the COVID-19 crisis and recover afterwards. This is significantly less than what an independent Scotland could have received if it had been a member of the EU.

However, we need to consider how an independent Scotland would have been likely to perform during this crisis and the type of economic recovery package the government may have provided.

We can do this by evaluating the performances of independent countries, Norway and Denmark, that have a similarly sized population to Scotland. This provides a benchmark and allows for the consideration of whether Scotland’s performance in tackling coronavirus would have been improved as an independent country.

As of June 2020, the key implemented and proposed fiscal measures to tackle COVID-19 in Norway accounted for NOK 162 billion (approximately £13.9bn).

Some of Norway’s key COVID-19 policies include:

In Denmark, the government responded very quickly to the coronavirus crisis and enforced various measures in order to prevent the spread of the virus. As of July 2020, discretionary fiscal support in Denmark amounted to DKK 131.4 billion (approximately £15.9bn).

Some of Denmark’s key COVID-19 policies include:

Norway and Denmark both have a population that is roughly the same size as Scotland. However, both of these countries have been able to commit to much larger budgets in tackling the coronavirus pandemic. SPICE estimated that Scotland has received approximately £3.7bn towards its COVID-19 recovery package.

In comparison, Norway’s implemented and proposed COVID-19 fiscal measures account for approximately £13.9bn, roughly 3.7 times more than the money that has been allocated to Scotland by the UK Government. Denmark’s spending is approximately £15.9bn, 4.3 times more than the funds provided to Scotland by the UK Government during the pandemic.

As you can see, independent Northern European countries, with a population of approximately 5.5 million, have been able to provide far greater funding towards tackling COVID-19 than what Scotland has received as part of the UK. Therefore, it is logical to suggest that an independent Scotland would have been able to offer greater funding towards tackling COVID-19, supporting businesses and the economy overall.