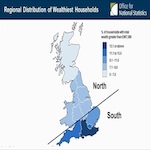 Unfair wealth distribution in the UK!

I wear a yes badge on my lapel and it has led to some interesting conversations at networking events, in business meetings and most recently on a train. Near the end of a journey from Glasgow to Edinburgh, a business person sitting opposite me motioned to my badge and asked:

“What on earth would make you want to vote yes?”

Always on the look out for a conversion, I responded:

I thought I had done quite well off the cuff, but he replied,

“Oh for sure we all want those things but why cant we have that under the union”?

“Well because the political system that voting No represents is unfair, flawed democratically and controlled by vested interests in London and the South East with radically different social and economic needs and values to Scotland, all of whom are focussed on a short-term electoral or economic cycle”.

“This means that no matter who we vote for within the union, Scotland’s interest are always a lesser priority to those of London and the South-East. The Westminster system’s political and economic policy focus is on the needs of the City of London and more broadly those most likely to benefit in the lead up to an election from the South-East economy’s short-term performance, the voting bulk of which has become so large it now swings every Westminster election. Which is why they get the government or policies they support, even if quite often its not in their longer-term interests either. And always regardless of how Scotland votes.”

He paused for a second and said, with a quizzical look on his face;

“You make it sound as if the system is completely broken, but its not is it?  I mean you can’t prove to me that it is broken, so how can you get my vote, after all if its not broke don’t try to fix it!”

“Well that depends on how you define broken.” I replied

“I mean just how bad do things have to get before people accept that the one policy fits all Westminster straightjacket isn’t working for Scotland nor indeed anywhere outside London and the South East?

He listened patiently as I pointed out that:

“How can a system that fails so spectacularly on so many levels, not need fixing?” I asked. 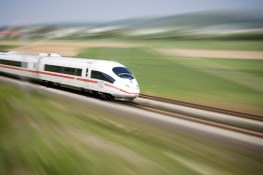 High speed trains. Not coming to Scotland any time soon!

“How can anyone vote No and accept a system that creates or enhances these problems when voting Yes gets us the possibility of a blank sheet of paper to design a better Scotland, one based on the needs and values of our distinct economy and society.  One where can start defining what we think it will take to create a Scotland that is fairer, greener, healthier, more confident, more entrepreneurial, happier, healthier, and more successful. And all whilst maintaing many ties across the home nations and further afield in Europe and around the world where those ties are mutually beneficial.

He just looked at me with a smile and said;

“I agree with everything you have just said, you are in fact completely right, but you misunderstood my point, when I said it wasn’t completely broken I mean for me.  I have done rather well out of the system and so it isn’t broken for me, and I don’t want it to change, it matters little to me that others don’t know how to play the system. So I will still be voting no”.

Now you probably thought I was going to tell a story of how I converted a right wing businessman from a No to a Yes, but sadly not. In fact, this experience represents a far more interesting lesson.  As a result, I have come to realise that there are probably two types of potential No voters; first, all of those that I have debated and who have stood up for the union are those that have personally benefited from the union, and want to protect their own perceived self interest. Where as all of the Yes campaigners I have met are simply looking to build a better Scotland.

These No campaigners include Westminster politicians who want to maintain their salary and position and of course still generous expense accounts; business people with current or potential knighthoods, OBE’s and CBE’s, MSP’s and political party members blinded by tribalism and a need to play the Westminster power game on behalf of their party;  business people who have created wealth for themselves and blame others and not the system for growing inequality in UK society – seemingly unaware of the fact that the more we engage the economically disenfranchised in society the more productive employees, customers and taxpayers we have. Indeed, the main business people on Scottish TV arguing for a No vote are or have been Conservative Party supporters and often Conservative council candidates.

An institutionalised system will always be protected often by any means by those who have benefited from the system and those who lack the vision to see a better way or who just don’t care that the system fails more people that it helps.

It is unfortunate some of them don’t have the vision to see how structural change to the UK system is necessary to ensure a sustainable and stable economic recovery and the success of the new UK free trade zone in the longer-term. The way things are going increasingly few people are going to be able to say “I’m alright Jack” down the line.

Secondly, there is a type of potential No voter (the majority of No voters) who are simply those that don’t yet have enough information to move from what they perceive to be the “status quo”, their default setting. In other-words, “softer” No voters or those that can be persuaded by reasoned arguments and vision, especially when the arguments for Yes are brought to life in a way which is personal to them.

I wholeheartedly believe there are more open minded voters in Scotland than those that are institutionally blinded to the opportunity for real progress. Thats the good thing about democracy of course, regardless of how we vote Scotland will get the political system our nation deserves. I just think we deserve better than the unfixable Westminster system that has failed us for so long.

My story does have a happy ending, if not the one I had hoped for. Despite not convincing my initial traveling companion, before I had to leave the train at Haymarket, as I was leaving the station I felt a hand on my shoulder that belonged to a man who turned out to be a corporate lawyer. He said:

“I just wanted you to know that what you said on the train and, well actually, your opponents vacuous response has moved me from unsure to a Yes,  that was just the clarity I needed”.

> Every businessperson who believes Scotland would benefit from a Yes vote should join business for Scotland and become one of our business ambassadors.  Have conversations like mine on the train and we will win, help us secure Scotland’s future on September 2014 18th.