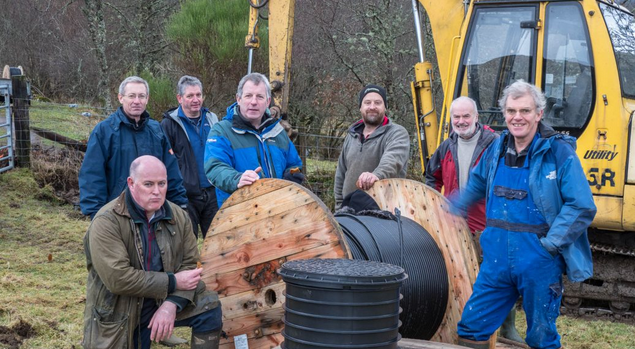 Written by Michelle Rodger
A remote Scottish community in a remote Scottish glen has topped UK broadband with 1Gbps speeds.
In what is believed to be a unique project in Scotland – delivering such high speeds through a community owned network, to such a small population – the project has involved local volunteers digging trenches and laying fibre cable across the rural landscape.

Balquhidder has joined a small fraction of properties in the UK able to reach speeds of 1Gbps. Working in partnership with Stirling Council and internet service provider (ISP) Bogons, community interest company Balquhidder Community Broadband (BCB), will deliver hyper-fast, future proof and community owned broadband to all 197 premises in the Balquhidder area.

Funded in part by an initial £100,000 investment from Stirling Council along with a similar investment from its commercial partner, and rural development funding from the Scottish LEADER programme, the BCB project is expected to bring millions of pounds in economic gains to the area.

It will deliver internet connections hundreds of times faster than those previously available from mainstream internet service providers. This will boost the local economy, improving jobs, diversity and resilience. Property prices are expected to rise, and residents and businesses will be able to better access commercial and public services online.

Collaborations in research and innovation between Scotland and China were at the forefront of a recent high-level forum in China. Leading figures from both countries attended the forum, the third forum of its kind, to strengthen and build on existing relationships between China and Scotland.

Innovation features high on the agenda for both countries and so does an increased awareness that the UK and China need to continue to share knowledge and expertise to increase the development and commercialisation of new technology.

The Royal Society of Edinburgh, Scotland’s National Academy, led the 10-strong delegation to Beijing during March 2018 to meet with distinguished experts from China with considerable experience in science and technology development, technology transfer and commercial exploitation of research.

On this occasion the forum, which was facilitated through two-days of intensive workshops and business to business meetings, focused on the themes of Big Data and Oil & Gas. Representatives from OGIC (The Oil & Gas Innovation Centre) and The Data Lab, two of the eight Scottish Innovation Centres (SICs) funded by the Scottish Funding Council, took part in the visit.

DIGITAL skills academy CodeClan is set for “significant expansion” in Glasgow as it relocates to larger premises, and is planning to take its model to more cities.

The Edinburgh-based social enterprise has set a target of achieving 1,000 graduations from now to the end of 2020. This will be achieved in part by a move for its Glasgow hub from The Tontine to flexible co-working space Clockwise.

And the recently installed chief executive Melinda Matthews Clarkson has revealed the academy is considering expanding into other cities, as it endeavours to build closer ties with industry to eliminate specific skills shortages across the digital technologies.

More than 80 tech meetup groups are thriving in Edinburgh, helping the Scottish capital to become one of the UK’s fastest growing centres for technology startups, according to data compiled by Tech City UK.

Tech City UK’s chief executive Gerard Grech visited Edinburgh as part of the organisation’s listening tour and met with startups including ShareIn and Machines With Vision to talk about what Edinburgh startups need to help achieve their ambitions. Tech City UK data revealed that in 2018 some 23,571 people are sharing their tech skills through 88 Edinburgh Tech meetup groups, helping to put Edinburgh on the map as one of the UK’s most active tech centres.

Edinburgh is well-known as the home to billion pound tech businesses like Skyscanner and FanDuel but the city’s strength and depth in software engineering, data analysis, artificial intelligence (AI), and deep technology is attracting more companies to the city and persuading more startups to base themselves there, according to the data on meetings which is supplied by Meetup.com.

Software engineering is the main skill being shared across Edinburgh Tech Meetup groups, with around 12,000 people claiming to possess programming skills. Data science/analytics was the next most shared skill, with around 6,000 people claiming to possess expertise in this area, followed by web development (around 3,800) and UI/UX design (almost 2,000).

The abundance of skills in Edinburgh has led to a surge in the number of tech companies in the city. Some 363 tech startups were incorporated in Edinburgh in 2017, according to last year’s Tech Nation 2017 report.

Many of these new companies are focused on Artificial Intelligence, which is being billed as the next great frontier in the technology industry.