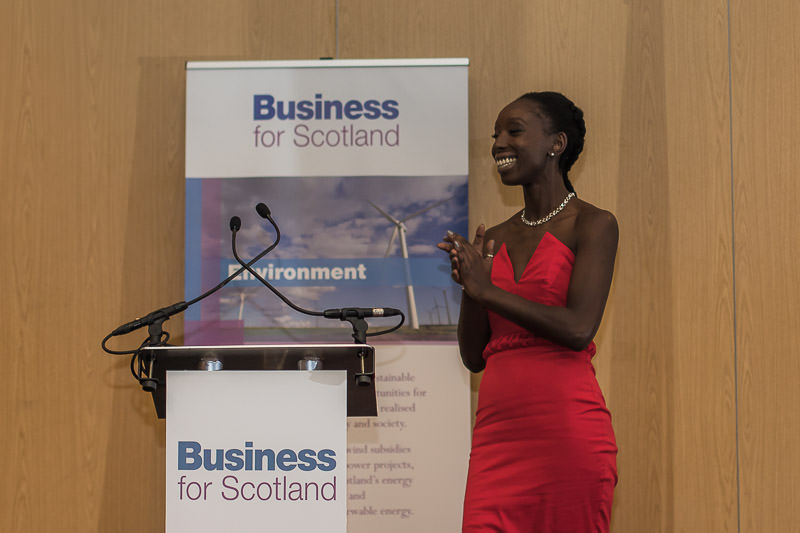 Entrepreneur, model and good friend of BfS Eunice Olumide is backing a campaign to support return-to-work opportunities for ethnic minority women in Scotland.

She will speak at the launch in Glasgow on Friday of an event organised by AAI (Adopt an Intern) which is working to overcome an imbalance in the workplace.

AAI’s work to date has focused predominantly on the young graduate population seeking employment opportunities but it has always had interest from returners aged above 30.

It will partner Radiant and Brighter in this Scottish Government-supported initiative. Founded by Michael and Pheona Matovu, after experiencing years of unemployment as a result of immigration controls, it has gained a reputation for successfully working with BME communities/groups to integrate people into the work place.

Edinburgh-born Olumide has a passionate interest in the gender pay divide and employment opportunities for ethnic minorities. She has a portfolio of businesses involved in art, publishing, film, television and her own clothing and accessories range using materials sourced from poor parts of Africa and India.

A hard Brexit would strip the Scottish economy of £30bn in the event of a no deal scenario, according to experts from the London School of Economics.

Edinburgh, Glasgow and Aberdeen would each lose billions of pounds in economic output over the five years immediately after the UK Government walked away from the EU without a trade deal.

While Scotland should expect to lose £17bn over five years in the event of a soft Brexit, this increases by £13bn if no deal is achieved, with Scottish cities among the hardest hit in the UK.

Edinburgh would lose 6 per cent (£5.5bn) of its economic output after a hard Brexit and 3.5 per cent (£3.2bn) after a soft Brexit over the first five-year period.

Glasgow would see a 5.5 per cent fall with a hard Brexit, costing £5.4bn, or a 3 per cent fall in economic output (almost £3bn) with a soft Brexit.

Worst hit of all north of the border in the case of a a hard Brexit would be Aberdeen, with the Granite City, with 7 per cent (£3.8 bn) wiped off of its economic output – second only to the City of London, while a soft Brexit would cost it 4.5 per cent (£2.4bn).

Views are now being sought from the public on the detail of how best a Scottish Investment Bank can meet its objective of supporting the Scottish economy and working for the benefit of the people of Scotland.

The establishment of a national investment bank was a key measure announced in the Programme for Government in September.  Benny Higgins, CEO of Tesco Bank, was appointed to lead the work to develop an implementation plan, and he has convened a small advisory group to support him in the development of this plan.

This week FM Nicola Sturgeon announced a public consultation on the details of the bank’s operations and how best the bank can achieve those aims and support Scotland’s economy.

A £1m research and development project focused on cost reduction, increased efficiency and added value for the oil and gas sector has received backing from Scottish Enterprise.

This new two year project will see the company vastly enhance the functionality of its Orca® software, a comprehensive survey planning and management tool, which will help reinforce the company’s position as a key global player in the marine seismic survey planning market by widening the technology gap from its competitors.

Scottish Enterprisehas offered almost £295,000 of funding which will help create three new jobs and safeguard a further nine. Additionally, it will help the company increase its revenue over the next three years.