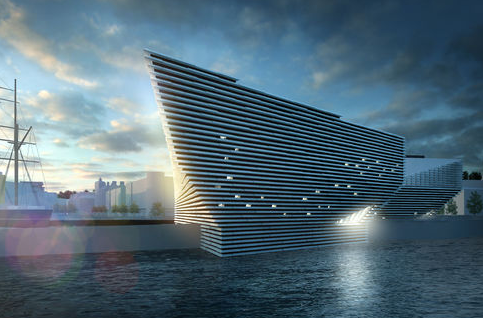 The V&A Dundee will make history when it opens in September this year, as the first institution outside London to use the famous name of the “Victoria & Albert Museum”.

Designed by internationally acclaimed Japanese architect Kengo Kuma, V&A Dundee stands at the centre of the £1 billion transformation of the Dundee waterfront, once part of the city’s docklands.

With its complex geometry, inspired by the dramatic cliffs along the east coast of Scotland, it stretches out into the River Tay – a new landmark reconnecting the city with its historic waterfront, and a major new cultural development for Scotland and the UK.

Due to cost a reputed £80 million by the time it opens (a figure which will make it the most expensive gallery ever in Scotland), it will focus primarily on fashion, architecture, design and photography and is expected to have a significant impact on tourism and the economy.

“Such a highly-regarded attraction has the potential to transform local tourism, and will undoubtedly draw visitors from far and wide,” says Malcolm Roughead of Visit Scotland. “There is a real sense of excitement and anticipation in the region.”

Single use plastic bottles, trays and cups could be banned in Scotland by 2030 under Scottish Government plans to bring in new laws to tackle plastic pollution.

The European Commission says all plastic packaging across Europe has to be recyclable or reusable by the end of the next decade. This will not apply to the UK as a result of Brexit, but Environment Secretary Roseanna Cunningham has asked civil servants to look at restricting the sale and manufacture of all non-recyclable plastics.

Unveiled last week, the first Europe-wide strategy on plastics includes proposals to reduce the consumption of single-use items and restrict the intentional use of microplastics, such as tiny beads put into toiletries. It also includes measures to boost recycling and cut marine plastics litter, including fishing gear.

The European Commission said this will help tackle plastic pollution, create jobs, boost innovation and cut carbon emissions. The move has been welcomed by environmental campaigners amid growing concern over ocean waste.

The low pound and more air routes saw a sharp increase in tourism last summer, with a 14/6% uplift in foreign visitors to Scotland between July and September.

The slump in sterling has made Britain a cheaper place to visit for overseas travellers while the launch of direct flights to key cities has made Scotland more accessible. Visitors were also drawn to Scottish locations used in film and television series such as Outlander and Harry Potter.

Roughead added that pioneering partnerships, including key collaborations with other tourism businesses to reach more potential visitors globally in new ways, had a significant impact.

“Our focus on digital marketing and unique PR campaigns including an ambitious YouTube influencer campaign has been very successful, with Scotland punching above its weight on a global platform.”

Members of a new partnership to devise a fresh approach to economic development in the south of Scotland, with a £10million injection for enterprise in the area, have been announced.

The Scottish Government has revealed the public and private sector partners who will make up the South of Scotland Economic Partnership, which will pave the way for a dedicated enterprise agency for the region, supported by funding announced in last month’s Budget.

The partnership features members with a wealth of business experience across sectors, sizes and locations relevant to the South of Scotland, as well as representatives from education, the third sector and the public sector.

Last year it was announced Prof Russel Griggs would chair the group with Rob Dickson of Scottish Borders Council as lead officer.

The full private sector membership is:

Businesses perform better when they have greater ethnic and gender diversity, according to a new study, which revealed that least diverse companies are 29% more likely to be less profitable.

McKinsey’s research found that diversity has the most obvious impact on financial performance when it is found in executive teams and roles that are directly in charge of generating revenue.