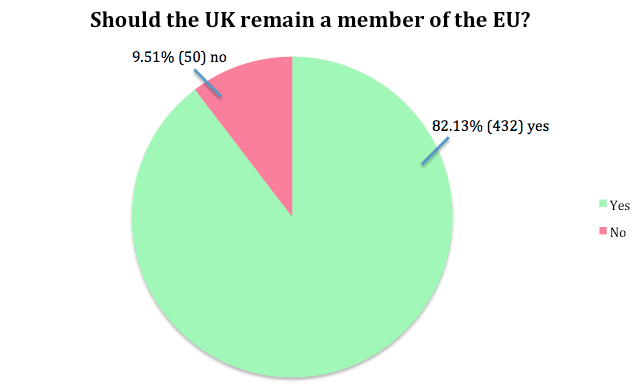 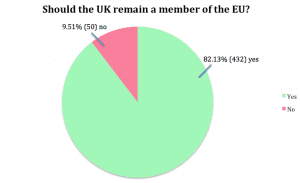 A snap poll carried out by Business for Scotland has found 82% support from Scottish SME’s for the UK to remain in the EU. Only 9% of respondents wanted to leave the EU.

This is our third poll on EU membership in three years and all have shown overwhelming support for maintain EU membership.54% of the business people surveyed said that they still needed more information, specifically on EU grant contributions to Scotland and what the impact of an exit would be on specific industries.

84% either strongly agreed or agreed that if Scotland became independent at some point in the future, it should remain a member of the EU. While only 9% of respondents strongly disagreed or disagreed with this statement.

The EU’s handling of the recent Greek financial crisis and refugee crisis had made 13% more likely to vote to leave the EU. 52% of respondents said that this had made no change to their vote.

In additional comments respondents expressed concern that the Scottish Government would not be represented in the pre EU referendum negotiations promised by David Cameron and that any concessions made, without any Scottish input may not be best for Scotland. Such an error could lower Scottish support for maintaining EU membership.

Few polled would disagree that the EU is in need of reform but our respondents felt in this case reform is best achieved from the inside, and with Scottish, Welsh, Northern Irish and English needs given due consideration. 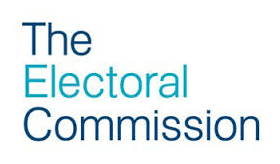 The Electoral Commission has dismissed the nonsensical claims made in the press that Business for Scotland and the SNP broke campaigning rules by ‘working together’ during the 2014 referendum campaign.

The Electoral Commission, in its letter to Business for Scotland, clearly states: “We are not opening an investigation or otherwise pursuing this matter further. We have seen no information or evidence that the SNP and BFS worked together to an agreed plan to promote or procure a ‘yes’ outcome at the Scottish Independence Referendum. We therefore consider this matter to be closed.”

A spokesperson for Business for Scotland said: “These were malicious and sensationalist claims, made by unionist press hoping to damage the Yes movement, and we welcome the Electoral Commission’s confirmation that we acted entirely properly.

“We were never in any doubt that our actions were within the law, because we sought specific advice from the Electoral Commission on how to work with other Yes organisations during the referendum. They told us that speaking with, sharing a platform with and getting updates from other Yes groups was not only within the rules, they expected us to do so and went so far as to say they couldn’t understand how we could run our campaigns without communicating in that way.

“The original complainant, a well known unionist blogger and social media troll, and the press who led on this ridiculous story simply don’t understand the Electoral Commission’s rules about which they were writing. And the Electoral Commission has made it clear that there is no need for an investigation, despite the headlines claiming that there was.

Gordon MacIntyre-Kemp, founder, CEO and registered head of the BfS referendum campaign said: “BfS has now twice been given a clean bill of health by the Electoral Commission in direct contrast to the No campaign’s business group, the CBI, which tried to avoid electoral campaign rules by not registering, but were forced to register by the Electoral Commission resulting in the resignation of as much as half of its Scottish membership.

“BfS will write to all the editors of the newspapers that ran this inaccurate story without seeking a quote from BfS and demand a right to reply.”

The number of plastic bags handed out in stores was slashed by 80% – the equivalent of 650 million carriers – in the first year of Scotland’s 5p charge.

The charge for single-use carriers has also raised about £6.7m for good causes in the past 12 months.

He added: “Previously, statistics showed that people in Scotland used more than 800 million new single-use carrier bags every single year – more per head than anywhere else in the UK.

“It’s now becoming second nature to shoppers to reuse their carrier bags and hopefully to think more about our impact on the environment.”

Morrisons, the Co-operative, Waitrose and Boots have all reported an estimated 80% reduction in carrier bag use, with Asda witnessing a drop of 90% and Sainsbury’s 100% as it no longer offers them to shoppers.

In 2011, Wales was the first nation in the UK to introduce a bag charge. Northern Ireland followed in April 2013.

The policy came into being in Scotland on 20 October last year and England introduced charging at the beginning of this month.

A report on the BBC website said that Scottish government research concludes that a reduction of 650 million bags north of the border means a net saving of more than 4,000 tonnes of plastic and other materials each year.

That is the equivalent of more than 500 million single-use carrier bags once it is offset by estimated increases in other forms of plastic bag, such as bags for life.

The net carbon saving is more than 2,500 tonnes of CO2 equivalent annually.

Giving evidence to the Scottish Affairs Committee’s inquiry into Scotland’s creative industries, Van der Kuyl also said North Sea oil could “look like a drop in the ocean” compared to the opportunities afforded by video games if the country takes the industry seriously.

He said Grand Theft Auto, which was created in Dundee, was “bigger than the whole of the recorded music industry combined” and added: “This is the biggest entertainment industry in the world and Scotland actually has a serious foot in the door and we don’t treat it that way.

“We’ll talk about our TV industry and our film industry – our film industry is nothing in terms of relative scale to our games industry yet I don’t think we appreciate the resource that we have nor give it the focus that it deserves.”

Van der Kuyl told MPs that emerging markets such as virtual and augmented reality could offer potential annual growth of hundreds of per cent.

“Especially for a country like Scotland, who really have nibbled round the edges and done very well, the opportunity is huge.

“If I were to be asked to compare it to the opportunity of North Sea oil, I would say it will make North Sea oil look like a drop in the ocean. This is the ocean we are playing for this time. We’re just trying to hold a tiger by the tail.

“If there was ever a time to get serious about this industry, now is it. If we let this opportunity pass by, others will take it and Scotland will languish, but we shouldn’t and I think we are brilliantly positioned to be successful.”

Van der Kuyl said any foreign students who had come to study video games development were “fairly heavily leant on to get out of the country after graduating”.

He said: “In our immigration policy we’re very well structured to invite people in who have already proven themselves, but they’re already settled.

“We need to attract talent that is very early-career, that doesn’t quite fit the Home Office boxes that are there at the moment, but which is exactly what we need in our companies.”

Business Quarter has the full story.

Local authorities in Scotland are to be handed the power to cut business rates in their area at the end of this month. They will also be able to keep all the cash collected from business rates.

Deputy FM John Swinney said: “The Scottish Government is committed to giving communities real control over their own futures. This substantial new power will give councils more control over business rates, and an opportunity to tailor them to their local area.”

He said the SNP government had already “set a strong platform nationally by delivering the most competitive business taxation in the UK” with the Small Business Bonus Scheme meaning companies either pay no rates or a reduced amount for 96,000 properties.

Mr Swinney said: “Scottish councils will be able to use these powers from the end of this month and, in contrast to England, will be able to retain all the business rates they collect.

“With these new flexibilities councils could, for example, use their local knowledge to attract new investment into town centres and help create vibrant communities where people want to live, socialise and do business.”

The announcement comes after a similar measure from Chancellor George Osborne, who told the Conservative conference earlier this month that local authorities in England would be free to cut the rates as part of a “devolution revolution”. But in England the changes are only due to be in place by 2020.

The Community Empowerment (Scotland) Bill, which was passed by Holyrood in June, will allow councils to reduce business rates and also to tailor any rate cuts they bring in to different areas or types of business.

This story in full in The Scotsman.

The Saltire Foundation, the charitable arm of Entrepreneurial Scotland, is marking its tenth anniversary with the biggest ever scholarship programme, which aims to recruit a record 160 students currently studying at Scottish Universities.

The Saltire Scholars Undergraduate Internship Programme, which kicked-off in 2007 with just six Scholars, gives undergraduate students with potential and ambition – most of whom may not otherwise have access to such opportunities – the chance to experience the working environment of highly successful firms or high growth entrepreneurial companies at home and abroad.

“The Programme enables talented students to increase their knowledge of the commercial world through challenging work experience. Instilling a global perspective in our Scholars is important in ensuring Scotland increases its standing on the world stage. As a result 70 per cent of our placements are outside Scotland and those in Scotland are with globally minded companies.”

More on this in Scottish Financial News.