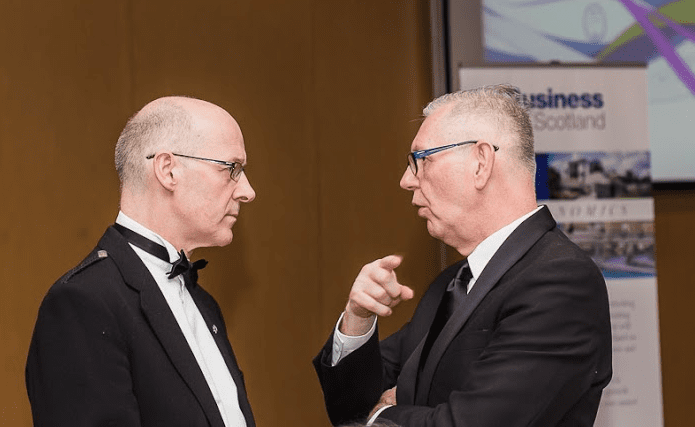 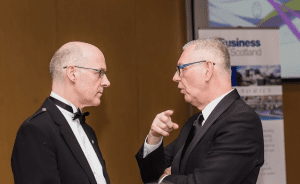 More than 200 business owners and guests enjoyed the event at the Hilton Hotel in Glasgow, where Gordon MacIntyre-Kemp, founder and CEO of BfS announced new initiative “Scotianomics”, aimed at sharing the understanding that Scotland does not spend too much, but grows too little under Westminster’s watch.

“The short-term goal of Scotianomics is to consider how Scotland can use the powers it has to improve the country’s prosperity.

“The ultimate goal of course is to win the economic argument for independence before the next referendum is even called.

“Scotianomics can be the key project in generating more powers for Scotland and in pushing support for independence through that 60 per cent support mark.

“Last year’s Yes campaign asked people for too much trust – we would have made it work – but to win over the 20 per cent who wanted to vote Yes but were afraid to, we need a more detailed, creative, forward- thinking credible vision for driving Scotland’s economic prosperity both with maximum powers and with independence.”

You can read more about the four projects in The National.

Aberdein Considine has been named as the UK’s Best Law Firm at a leading mortgage industry awards ceremony in London.

The firm beat off challenges from dozens of rivals to pick up the prestigious title at the Mortgage Finance Gazette Awards in London this evening (Wednesday, November 18).

A panel of experts comprising key senior decision makers in banks, building societies and other lenders said Aberdein Considine “stood out from the crowd” thanks to the unique way it deals with debt recovery work for the UK’s biggest banks and financial institutions.

BfS chairman Rob Aberdein is Partner in charge of Debt Recovery at the firm. He said the award was a “huge accolade”.

“To be recognised as a British legal leader is an enormous boon for us and I am delighted for all of our staff, whose hard work made this happen,” he said.

“We have acted for lenders for three decades now and we are extremely proud of the strong relationship we have cultivated with many in the industry. These relationships are built on trust, mutual understanding and, ultimately, performance, which is what I put this award down to.

“We are particularly pleased that the researchers picked up on the regulatory advice we compliment our debt recovery service with.

“This is something we have invested in heavily over the past few years and a service which has become invaluable to a number of our larger clients in the banking sector.”

Mortgage Finance Gazette magazine has been the market-leading publication for the mortgage lending industry for over 140 years.

The award win comes just weeks after the Legal 500 named Aberdein Considine as a Top Tier firm in the field of Debt Recovery.

The guide, which has been published for over two decades, is highly regarded by lawyers and clients alike due to its independent research-based assessment of law firm and lawyer capabilities.

In it, Aberdein Considine is described as “one of Scotland’s fastest growing law firms”.

Two separate, innovative initiatives aimed at improving gender equality in business have been launched in Scotland.

First Minister Nicola Sturgeon is backing an initiative to promote the growth of women-led companies in Scotland.

Run in partnership with Bright Red Triangle – Edinburgh Napier University’s entrepreneurial hub – the ‘Accelerate Her’ competition will culminate in six finalists being invited to the Dynamic Earth event to make their business case to some of the country’s most successful female entrepreneurs and business leaders.

The First Minister will announce the winner after a keynote speech at Edinburgh Castle.

Annabelle Ewing, Scottish Minister for Youth and Women’s Employment, said: “The Scottish Government believes that supporting more women to set up and succeed in business is an economic priority and is committed to closing the gender-gap in enterprise. Through Scotland Can Do we have brought together public, private and third sectors to shape a support network to nurture women-led enterprises.”

The second initiative, thought to be the first of its kind, has been launched to help companies achieve greater gender balance on their digital platforms,

The standards, introduced by Ms Ewing at a women’s entrepreneurship event at Scotland House, are designed to optimise content on websites and social media to ensure organisations reach out to both genders in their digital communications. This is done through an audit process that reviews current service provision. Companies that meet the criteria can display the certification logo on their platforms.

WES said the launch comes amid a growing global focus on digital gender balance, noting that research indicates 90 per cent of female entrepreneurs use web-based support services and require content that engages them in an appropriate way.

WES chief executive Margaret Gibson said the initiative followed an assessment of digital platforms that “found unconscious bias and widespread content” that contracted the organisations’ values and commitment to gender equality. The standards devised to address that imbalance are believed to be the first of their kind.

Ms Gibson said: “Women are active users of digital platforms and no organisation can afford to fall short of meeting the needs of a significant customer base. With the increasing use of digital platforms to deliver business support services, it is important that the content attracts and supports everyone who wishes to start up and grow their own business.”

Scottish Company of the Year – Skyscanner

Skyscanner has been crowned the 2015 Scottish Company of the Year at the prestigious Scottish Business Awards.

Edinburgh-based Skyscanner was presented with the top accolade for its commitment to creating high growth jobs and for its dedication to social responsibility.

Judging panel chairman, Sir Tom Hunter, said: “The quality of entrants this year underscores the absolute point that Scotland can lead the world.

“Everyone pitching for an award is a winner in my book and boy do we need these winners to succeed.

“It’s a true inspiration to see just what Scotland can produce in entrepreneurship at the Scottish Business Awards.”

Hollywood star and humanitarian George Clooney addressed the audience of 2,000 at the EICC in Edinburgh, praising the efforts of everyone involved.

FanDuel was among the winners, picking up the Tech Company of the Year award for its continued international success and extraordinary growth in the past 18 months.

All profits from the awards ceremony are donated to a range of charities including the Social Bite Fund, Scottish Edge and human rights organisation Not On Our Watch.

The event is expected to raise more than £1m for good causes at home and abroad.

You can read the full list of winners in Business Quarter.

The Scottish Government will expand its links with Irish business and academic groups in the new year with the establishment of a new ‘hub’ office to encourage greater cooperation.

The announcement was made after the recent visit by cabinet secretary Fiona Hyslop’s to Dublin, where she was discussing government relationships and the European Union.

The hub, which will open in January 2016, will operate within the British Embassy to build a dedicated Scotland focused operation.

The base will be led by John Webster, a diplomat with experience within the embassy.

Hyslop, commenting on Scottish-Irish links and the new appointment, said: “The benefits of EU membership to Scotland and Ireland stretch far and wide. The EU is a vital export market for Scottish companies and accounted for nearly half of our international exports in 2013. It’s also estimated that over 300, 000 Scottish jobs are either directly or indirectly supported by exports within the EU.

“Investment from Ireland is vital to Scotland and supports around 6,000 jobs. Exports from Scotland to Ireland also support the Scottish economy to the tune of £920 million. The Dublin hub will provide firms with additional support to help them grow. Our dedicated staff will also have the expertise to give them an insight into what businesses are looking for.

“John Webster is a well-known diplomat here in Ireland and I welcome his appointment. John brings a wealth of experience to the Dublin hub and I’m sure his team will work well under his leadership. I look forward to returning to Ireland next year to discuss their achievements.”

Although Scotland does not yet have a full diplomatic network, Scotland Development International (SDI) host 41 offices in 19 countries across the world to promote goods and services.

SDI is funded through Scottish Enterprise, which allocated £17.1m of funding to ‘Internationalisation’ in its 2013/14 accounts.

The full story is on the Common Space website.

Social entrepreneurs have called for greater recognition, according to a new poll.

94% of people running a social venture feel they should be recognised as serious businesses, according to the poll from UnLtd, the foundation for social entrepreneurs.

Specific challenges cited by social entrepreneurs include finding sustainable revenue streams (71%), getting access to the right kind of finance (60%) and making a living from their social venture (71%).

Mainstream enterprise support agencies are recognising the need to provide support for social ventures. Research conducted by UnLtd in partnership with the National Enterprise Network reported that 27% of their clients were starting or already running a business with a social, environmental or community objective.

Director of strategy Katharine Danton explains: “We are seeing a surge in the number of people stepping up with entrepreneurial solutions to social problems. But the reality is it’s still very difficult for social entrepreneurs to maximise their social impact.

“Social entrepreneurs need customers, staff, buyers, lawyers, parents, indeed people from every corner of society to back them – they need to go mainstream. We believe that by going mainstream, many more social entrepreneurs will be able to reach their potential to create serious social impact.”

UnLtd has unveiled its new strategy ‘Going mainstream: how can social entrepreneurship break through?’, which will see it increase its focus finding ways to break down the barriers faced by social entrepreneurs, helping them to become a valued and vibrant part of society.

By helping them to break through into the mainstream, UnLtd believes many more social entrepreneurs will be able to reach their potential to create serious social impact.

This and more in Business Quarter.