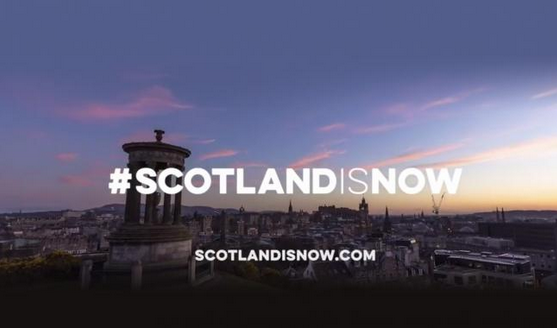 A major new international marketing initiative has been launched,  hailed as the “biggest invitation ever to come work, live, study, invest, visit and do business with Scotland”.

For the first time, the Scottish Government, Visit Scotland, the Scottish Development International (SDI) and Universities Scotland have all agreed to pool their budgets for international marketing, launching a £6 million campaign to tempt “the high-spend tourists, the professional talent, students from around the world and of course, big investment from expanding international businesses”.

Under the branding, Scotland Is Now, the public sector organisations believe they can create a movement that will “tell the authentic story” of the country as a “bold and positive country, rich in history and heritage but forging forward in a way that is progressive, pioneering and inclusive.”

The new campaign is, the Government claims, primarily about boosting the economy and, ultimately, a bid to do no less than “transform Scotland’s place in the world”.

It comes as ministers admit that, despite strong assets like “world renowned universities,” “incredible history and landscapes, warm hospitality”, and a “high quality of life matched with affordable living,” they face fierce competition in attracting people to Scotland.

Government notes accompanying the launch of the campaign state say Scotland punches above its weight internationally, but, “as our competitors step up their game and the uncertain world of migration, business, investment and travel evolves, one thing is for certain – Scotland needs to shift gear if it is to sustain, let alone grow, its international appeal

A new publication sets out how digitisation, automation and other innovations will affect the Scottish labour market.

The joint report from the Scottish Government and the Scottish Trades Union Congress follows from the First Minister’s recent biannual meetings with the STUC, where discussions addressed the growing anxiety among some workers that their jobs may either be lost or changed due to new technologies.

It discusses competing claims about the future of work and assesses the extent that technology is already affecting the labour market, and identifies areas for further consideration.

Nearly two-thirds of Scottish SME owners would like to “reset” Brexit negotiations and remain in the European single market, according to the latest results of a prominent industry survey.

While the latest Citibase Business Confidence Index survey showed 70% of London-based businesses expressing the most confidence in the government’s ability to secure a good Brexit deal, Scotland was the least confident region in the UK, with nearly as many (63%) not confident in a favourable outcome.

Following sustained political and economic uncertainty, the survey found 61% of UK SMEs would like to reverse the Brexit process and retain membership to the EU.

Fifty three per cent think that the UK has been effective so far in its initial Brexit negotiations, a figure that is particularly pronounced in London (75 per cent) and the North East (73 per cent), but this figure plummets to a mere 19 per cent in Scotland and 25 per cent in Yorkshire, highlighting strong differences of opinion across the UK.

Scottish small and medium-sized businesses  are struggling to grasp digital and export opportunities to help grow their revenues, according to a recent survey.

More than half of Scottish SMEs (59%) say they do not use e-commerce to sell their products and services, of which 90% say they have no plans to use e-commerce in the coming year. However, of those that do use e-commerce, 40% said they plan to increase the use of it to grow sales in the next 12 months and 30% say online selling will be important to their future growth.

Scottish SMEs in the retail sector and start-ups in their first year of trading show the strongest digital adoption, with 74% of small retailers and 44% of start-ups saying they use e-commerce to sell products and services.

The YouGov survey, published by Amazon also finds that only 23% of SMEs in Scotland are currently exporting, with more than three quarters (76%) saying they do not currently export at all.