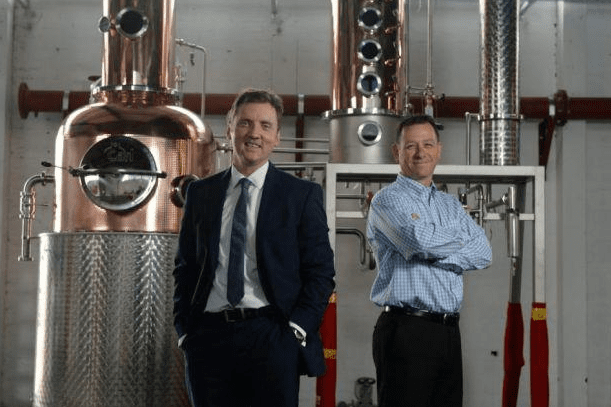 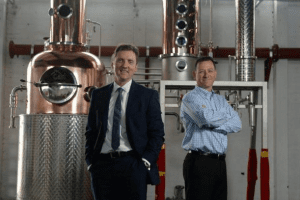 Ian McDougall and Liam Hughes of the Glasgow Distillery

The explosion in the Scottish gin market is contributing to an export boom in white spirits for the UK.

Exports of gin have now reached £390 million, an increase of 37% in five years, according to government figures.

Scotland’s 16 distilleries account for 70% of Britain’s gin manufacturing, many of them launching in the last few years.

Ian McDougall’s Glasgow Distillery is one of them. He and his team started making Makar Glasgow Gin just a year ago and have already won awards for it.

“Glasgow and surrounding areas had at one point in the 19th Century between 30 and 40 Single Malt Distilleries as well as the grain distilleries.

“We launched Makar Glasgow Gin in October 2014 and started laying down whisky in 2015. Already we are exporting to the UAE; USA, Germany, France and Denmark, and Makar was a double Masters winner in the Global Gin Awards in June 2015, the only gin to achieve two Masters awards.

“We are also in advanced discussions in India.”

More in the Daily Business

Waste Manager Veronica Symonds, who admits that she’s “always delighted when someone is interested in waste”, knows the firm — which aims to salvage every single scrap of the estimated 100 tonnes of salvagable and recyclable waste expected to be generated — has a challenge on its hands.

She said: “All too often it’s the last thing on everyone’s mind, but I take it seriously and have the opinion that it’s not waste — it just need to be sorted out, extracting everything that has a value.”

The theme of the festival, which will see headline acts Manic Street Preachers, The Proclaimers and Kaiser Chiefs join hundreds of other acts, is superheroes, with revellers actively encouraged to rock up to the site outside Beauly in fancy dress.

Veronica will have her own 40-strong team of “environmental superheroes” patrolling the site, promoting and rewarding good behaviour whilst handing out summons to the ‘Carbon Court’ for those caught behaving badly.

Declaring herself up for the challenge, Veronica admitted: “Of course we will need the help and support of all the festival goers, so we plan to get the message out as far and as wide as we can during the lead up to and at the festival.

“Where possible, we are hoping that everyone will join us and bang the drum for zero waste at Bella.”

You can read the full story in the Ross-shire Journal.

300 Scottish companies have now committed to paying the Living Wage, news welcomed by Business for Scotland which is actively campaigning for a Living Wage.

Roseanna Cunningham, Secretary for Fair Work, Skills and Training, says that Holyrood’s hourly rate of £7.85 for staff aged over 18 is a true living wage and that the number of companies that have signed up shows there should be no barriers to raising low pay.

Ms Cunningham said in the Daily Business: “Much has been made of the higher national minimum wage announced in the Chancellor’s budget but, despite a cynical attempt to call it a living wage, there should be absolutely no doubt that this figure is not a living wage.

“For the majority of households it will also not be sufficient to offset the cuts to benefit income announced in the budget. Poorer households are likely to see the greatest losses and there is a real danger that inequalities will increase.

“The actual UK Living Wage figure of £7.85 is supported by the Living Wage Foundation and, unlike the new higher minimum wage rate, is worked out based on need. This is the rate at which both the UK and Scottish Living Wage Accreditation Schemes recognise and it is the figure that the Scottish Government is committed to encouraging as many employers as possible to pay.”

Business for Scotland surveyed its members recently – you can read the report here.

Scotland has enjoyed the longest period of unbroken economic growth on record since devolution in 1998 according to Scottish Parliament figures.

In the second and third quarters of 2012 the economy was at a standstill which means that for 12 quarters in a row Scotland has avoided negative growth – or recession, as it is more commonly called.

A Scottish Government spokesman was quoted in The Herald saying: “These figures highlight the on-going recovery of the Scottish economy. 2014 saw the fastest level of economic growth since 2006, unemployment is falling and real wages are up, all of which should feed through to household incomes.

“As our economy continues to strengthen, we will use every power we currently have at our disposal to grow the economy even further, increase employment, remove barriers to work and support household incomes.”

Businesses in Scotland are on course for ‘a summer of success’, according to BDO’s latest report. BDO’s Output Index rose to 104.4 this month (up from 104.1 in July), which indicates growth in business activity.

Businesses have reacted positively to the political stability after the general election, and increased certainty has encouraged businesses to invest and focus on their long term prospects. This is particularly true for sectors such as property and financial services which had feared policy change.

Although business optimism is down this month (falling from 103.9 to 103.2) it is still significantly above the long-term trend. This shows that the UK is starting to pull ahead from other global heavyweights in the Eurozone and some emerging markets.

Commenting on the findings, Martin Gill, head of BDO LLP in Scotland, said: “Political certainty has bolstered short-term business confidence. The result is a thriving economy, despite global economic unrest.

“However, as business success continues to exceed other markets, the strong pound will make it harder for our exporters – particularly manufacturers – to find customers. We can’t let confidence tip over into complacency; keeping us competitive should be a government priority.”

The full story is in Business Quarter.

Scotland has the worst mobile data coverage in the UK, according to a recent study.

The report from the telecoms watchdog Ofcom found that Scotland has the worst third generation (3G) coverage in the UK. A quarter of Scotland’s landmass has no mobile coverage and that, at 97.1 per cent, Scotland has the lowest proportion of premises in the vicinity of which a 3G signal can be received. This compares with 99.6 per cent in England and a UK-wide average of 99.3 per cent.

Despite the findings, the report also found that Scotland is turning into a “smartphone society” with the device now the most popular way to get online.

UK and Scottish governments are now under pressure to take action to bring high-speed mobile data links to rural parts of the country.

The mismatch between the massive rise in smartphone and tablet use in recent years and the fact that large parts of Scotland don’t have a mobile signal for voice and text messages (2G) yet alone a 3G data signal means that action is now urgently needed, critics say.

Garry Clark of the economic development unit of the Scottish Chambers of Commerce told the Sunday Herald that poor mobile phone and data links are already damaging growth in rural parts of Scotland.

“Mobile data links are either non existent or very poor across large parts of the country. Visitors to Scotland who were surveyed recently by VisitScotland reported high levels of dissatisfaction with mobile telecommunications.”

Clark points to Nordic countries such as Finland, which, despite its low population density on a par with Scotland, enjoys universal high speed mobile communications coverage.

More in the Sunday Herald.