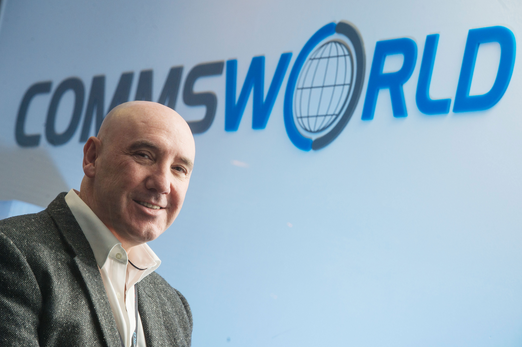 Ricky Nicol’s Commsworld has announced record revenues of more than £15 million for the last year – a rise of 15 per cent – and is predicting further growth in 2018.

Its projections for this year indicate even stronger growth with an expected turnover of more than £20m after Commsworld landed its biggest contract – a seven-year, £30m deal to become the key provider in Glasgow City Council’s (ICT) contract.

The company has also seen its headcount grow, with more than 80 staff now employed across locations including Aberdeen, Glasgow and Edinburgh, with hopes to reach 100 staff in the coming months.

Commsworld chief executive, Ricky Nicol, said: “It’s been a terrific year and it’s testament to the hard-working team we have that we’ve enjoyed this record year of growth. We’re all delighted that 2017 has been the best year in our history. After taking the decision to provide a personal and tailored service to businesses, we’ve seen more and more clients join us or choose to renew their contracts with us.”

Micro businesses launched by Scots generate £1.7 billion a year, according to new research.

More than 500,000 people living in Scotland have started a side business to help with the cost of bills, savings and debts, and bring in an average of £272 a month on top of their main income. That represents a 20 per cent increase from when they first started their business.

About two-fifths of those with side businesses sell goods, such as secondhand furniture or clothing at car boot sales, or through online marketplaces such as eBay, Amazon, Depop and Shpock. And about one in ten make their extra cash through arts and crafts, with creative pursuits such as making and painting pottery and designing jeweller, according to online lender Sunny.

Asked why they started side enterprises, nearly two-thirds highlighted the sense of purpose running one brings, 47 per cent said they needed the extra cash, while a fifth wanted to make money independently. One in six said they started working on their source of extra income because they realised an existing hobby could make money, while 15 per cent said they wanted to be their own boss.

Micro-entrepreneurs in Scotland are using their extra income to boost their monthly earnings (31 per cent), as well as to help cover bills (15 per cent) and contribute to savings (27 per cent). Meanwhile, some side business income is being put aside for bigger, planned expenditures such as holidays (6 per cent) and Christmas (13 per cent).

Scotland is poised to become the first part of the UK to consider introducing a universal right to food under radical proposals to be published next month to tackle health, social and economic inequalities.

The move is to be included in a government consultation on a Good Food Nation Bill and could mean all government policy would have to be compatible with addressing food poverty and proposed legislation.

It may mean, for instance, that social security reforms could be blocked if they were considered to risk making the problem of food insecurity worse.

The development could also see the setting up of a Scottish Food Commissioner to monitor progress and report to Holyrood on how targets are being met to combat food poverty, obesity, improve healthy eating and reducing food waste.

One possible consequence could be that small stores in rural areas are barred from charging higher prices for essentials such as bread, milk and vegetables than city supermarkets.

The North East Scottish Independence Conference will be held in Aberdeen this weekend.

The Aberdeen Independence Movement (AIM),  formed fewer than two months ago, will host and be joined by a broad array of organisations including Women for Independence, EU Citizens, Pensioners for Indy, the Common Weal, Radical Independence Campaign and many more.

An impressive array of speakers has been lined up along with workshops on various independence-related topics. Speakers include Gordon Smith of Pensioners for Independence, Ash Burnett from EU Citizens for an Independent Scotland, Fiona Robertson of Disabled for Yes and Gordon MacIntyre-Kemp, CEO of Business for Scotland.

The event will take place at the Copthorne Hotel, Huntly Street, Aberdeen on Sunday, April 8 from 11am to 6pm.