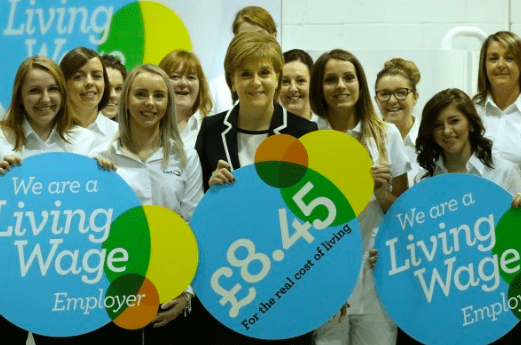 Pay rise for Scots employees as more than 600 firms sign up to living wage increase.

The increase taking the hourly rate to £8.45 in Scotland, was announced by the First Minister, urging more firms to become accredited Living Wage employers.

The scheme, administered by the Poverty Alliance, reflects the cost of living and pays more than the UK Government’s similarly-named National Living Wage, which stands at £7.20 an hour.

Poverty Alliance director Peter Kelly said: “It’s more important than ever for leading employers to join the growing movement of businesses and organisations that are going further than the government minimum and making sure employees earn enough to cover the real cost of living.”
30th October to 5th November 2016 is Living Wage Week – a UK-wide celebration of the nearly 3,000 employers that have voluntarily committed to ensure employees and subcontracted staff working on their premises earn a real Living Wage. This includes nearly a third of the FTSE-100 and major household names such as IKEA and Nationwide.
Read more.

Workers from the EU contribute £7.3bn to Scottish economy

In a submission to Holyrood’s Economy Committee looking at the economic impact of Brexit economic consultants at 4-consulting said the number was a ‘snapshot’ of the contribution of workers in Scotland born in other EU countries.

Around one in 20 workers in Scotland come from other EU countries, with patterns of employment “markedly different” north of the border compared with other parts of the UK.

The 4-consulting submission said: “Using an economic model and underlying data published by the Scottish Government, the economic contribution of workers born in other EU countries was estimated to be around £7.3 billion in Gross Value Added (GVA) each year.”

The Scottish Government has called for a guarantee from the UK Government that EU nationals will be allowed to stay following Brexit.

The SNP administration also wants control over immigration policy as part of a package to protect Scotland’s place in Europe.

Mundell insisted the industry needed to continue to make the case and secure the best deal for the farming community.

“And you need to make it loudly,” he said.

“You need to tell us what you want and don’t want and you need to tell the public too. If we get it right, farming will emerge into the next decade as a sector full of opportunities, many of which will be new opportunities abroad. And yes that does mean access to EU markets, This will be the first topic discussed when the Scottish Government meets with the UK Government and other devolved administrations in early November.”

In response to a question from Carnoustie fruit grower James Porter on the need to guarantee the farming industry access to seasonal workers, Mr Mundell said he couldn’t envisage any circumstance in which European workers would not be allowed in to the country. 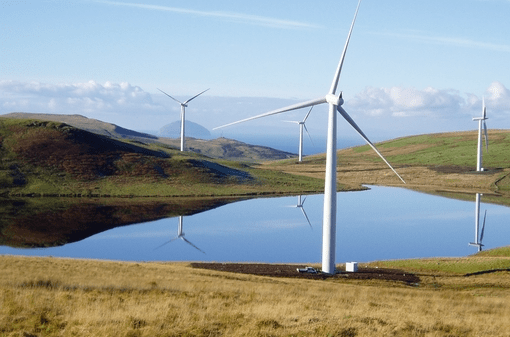 Scottish Deputy First Minister John Swinney and leaders of three Scottish Island Councils have written to Greg Clark, the UK Business and Energy Minister, to voice their concerns on continued uncertainty on support for large-scale renewable energy projects on the Scottish Islands.

Delays in announcing which technologies will be supported in the next round of auctions that support the renewable energy sector are putting at risk existing investments made in developing renewable energy projects which would bring considerable socio-economic benefits for the Islands’ communities.

An independent report, commissioned by the Scottish Government, estimated that Scotland’s island economies could benefits from up to £725 million over the next 25 years from renewables projects.

Swinney said: “In the wake of the EU referendum, the UK can ill afford to miss the opportunity to unlock £1.3 billion of investments offered by the shovel ready anchor projects on the Western Isles and Shetland and the associated benefits for the UK-wide supply chain.”

Mark Tiffney, of Dynamic Core Studios Clydebank is here to help us lose weight, but not as a quick fix…

Lose Weight Fast – 3 words and they are all wrong.

As a fitness professional who markets his services, I obviously keep an eye on the search terms used to find my content. And the phrase that comes up frequently “Lose Weight Fast”. It’s only 3 words, but every one of them is wrong.

How can words be wrong?

Very simply, they are not asking the question that is going to deliver the answer being sought.

There are no wrong answers, just badly worded questions.

Over the next 3 posts I’m going to break down each word and show you exactly why, if these words ever pop into your mind, you should dismiss them immediately.

Whatever you focus on you will get!

Your subconscious doesn’t take on the nuances of language. It simply picks up on the themes you repeatedly tell it. So if you focus on what you DON’T want, you are much more likely to obtain that thing. So here, if the goal is to lose weight and you continue to focus on that, all your subconscious will pick up on is that you are focused on weight and will strive to give you more of it.

This is true of any goal, whether it be a personal achievement or a business orientated target. If you focus on what you don’t want to happen, it’s more likely to happen and you are going to subconsciously make it so.

Think about it, if you had a ball of paper and wanted to throw it in the bin in the corner of the room (for your 3 ‘boss points’ of the day) would you be more likely to succeed by thinking “Don’t hit the rim” or “Straight in the middle”?

Rather focus on what you do want. And be specific.

(Be honest, have you just tried to hit the bin? How did you get on?)

In this instance, perhaps you want to be leaner, you want to have more energy, you want to feel good about how you look. Whatever it is, just be sure it is a positive outlook.

Focusing on the positive feels better too. You’ll instantly feel more vibrant and energized in achieving that goal.

Next time we’ll have a look at the variable you are focused on, weight, and why that is NEVER where your focus should be (well almost never).