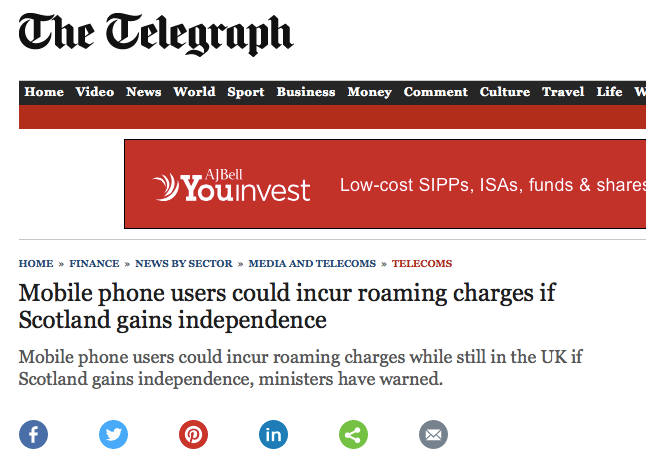 Telegraph headline, 29 June 2013 – claimed a No vote would protect Scotland from roaming charges.

Scots face paying increased roaming charges after Brexit as a result of a change to European legislation.

After the UK Government issued dire warnings during the independence referendum that Scots crossing the border would face mobile roaming charges in the event of a ‘Yes’ vote, British travellers under a hard Brexit now face the bill of incurring greater charges after the EU Commission scrapped roaming charges across EU states.

The European Commission voted yesterday to abolish call, text and data charges for travellers from 15 June 2017 for all except Brexit Britain, where travellers could face fees in line with what visitors from the United States pay, that is around €50 for listening to a song on Spotify.

“Mobile telecoms is a classic example of how Westminster-controlled, UK-wide regulation short-changes Scotland.

“The regulator, Ofcom, seems to have a ‘BBC Weather Map’ view of the UK, and treats Scotland, particularly rural Scotland, as an afterthought.

“Countries like the Faroes, Finland, and Germany manage things differently, and enjoy much better digital connectivity.”

The European Commission has ruled out a quick bilateral deal between the UK and EU to cover roaming charges. Gunther Oettinger, the German commissioner previously said in a response to the European Parliament that under WTO rules any bilateral agreement outside of a comprehensive free-trade deal would have to be extended to all other members.

Mobile phone operators will have to agree their own bilateral deals with other phone companies across the EU. Finnish MEP Miapetra Kumpula-Natri who drafted the Parliament’s roaming bill has been quoted as saying ” After Brexit, its the market, the operators, that will decide the prices. If the UK operators get good deals with other European companies, roaming might be cheap. If not, it can be very expensive.”

A paper published in 2013 by the UK Government examining the impact of a Yes vote in the 2014 referendum warned that mobile phone companies could introduce roaming charges when people cross the border between Scotland and England, but now EU roaming charges will apply to Scots purely because of Brexit.