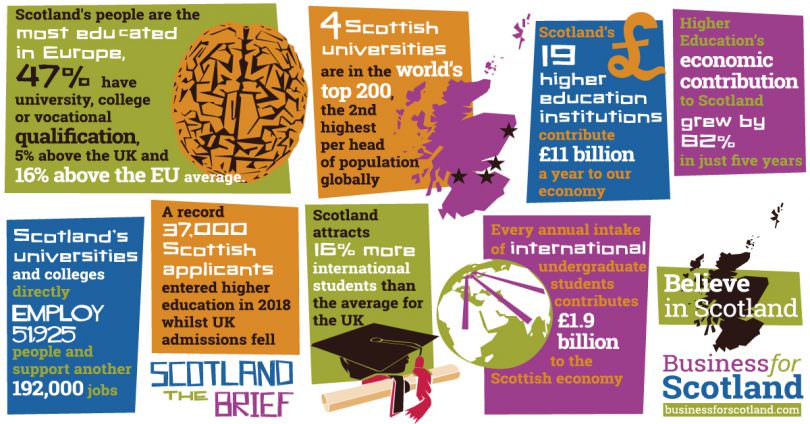 It may be a surprise to find that Scotland’s people are some of the most educated in Europe – 52% of people in Scotland have university, college or vocational qualifications, which is 5% higher than the UK figure, as well as around 20% higher than the EU average. 71

Graduates from Scotland’s universities continue to have the lowest level of unemployment in the UK at 6%, compared to a UK average of 7%. 72 Scottish graduates also have on average three times less student debt at graduation compared to English students (at an average of £13,890 compared to £40,280) as they pay no tuition fees while studying at university in Scotland. 73

A few more brief facts about the education sector:

There are no prizes for guessing that Brexit represents the biggest threat to Scotland’s higher education sector. Pre-Brexit, roughly 11% of competitively won research funding in Scotland’s universities came from the EU. 287 The UK Government has to announce whether the UK will continue to participate in the Horizon research fund, as well as the EU-dominated European Research Area. 289 Brexit has also had a knock-on effect on the number of EU students applying to study in Scotland. Leaving the EU means that students will be charged international tuition fees, rather than their fees being paid for by Student Awards Agency Scotland (SAAS), which could increase costs by tens of thousands of pounds. Brexit also reduces opportunities for academics in the UK, as they have to follow research grants; if these are threatened, they will have to go elsewhere. Between 2016 and 2019, 2,500 academics from the EU left Scottish universities. 292