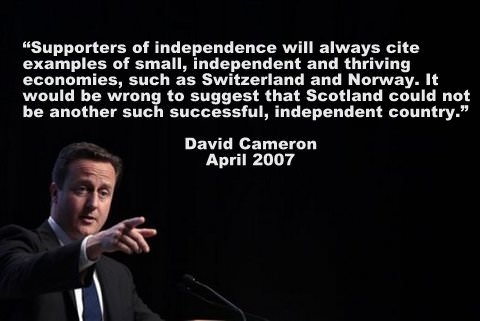 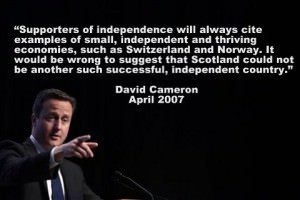 A group of leading business people have written an open letter to the press today sharing deep concerns about the likelihood of Scotland being ripped out of the EU against the wishes of both the people of Scotland and its business community.

Polls indicate that the population of the UK as a whole could vote to leave the EU if given the choice at the in/out referendum promised after the next election.  Scotland which is pro EU makes up only 8.4% of the UK population so; as part of the union we do not get to chose our country’s future on this as with so many other issues.  The overblown population of England and the South East in particular will choose for us and more often than not they chose a course that is against Scotland’s interests.

A Survation poll for The Mail on Sunday indicates that 50 per cent of the population would cut the UK’s ties with Brussels, with a record low 33 per cent in favour of continued membership.  This is almost the exact opposite of polls on EU membership in Scotland and a Business for Scotland member poll has found that 99% of business fear an EU exit and want to stay.

It could be argued (and we agree) that Scotland will not be part of the UK when the EU poll is held, and that the Labour Party has not confirmed whether it will hold a similar referendum if elected to government at the next election. However, Business for Scotland argues the No Campaign cannot guarantee continued EU membership and in fact there is now more uncertainty about Scotland’s place in the EU with a No vote than with a YES vote in September.  This view is supported by the words of No Campaign policy senior advisor Professor Jim Gallagher.  We also believe that if Labour do not offer the EU referendum in their 2015 UK General Election Manifesto, they will struggle to win the votes they need in Eurosceptic constituencies.

Here is the letter:

It looks as though the UK may leave the EU following an in-out EU referendum promised by the Prime Minister David Cameron in 2017.

Access to the common market is vitally important to both Scottish and wider UK companies. We can see from the poor performance of UKIP in elections and successive opinion polls here that the people of Scotland are generally more outward looking and pro-European than the electorate in other parts of the UK.

Scottish businesspeople are worried that despite an overwhelming desire to stay connected with our European partners, voters beyond our borders will remove Scotland from the EU against the democratic expression of Scotland’s business community and wider public. This threat may persist no matter what the result of Prime Minister David Cameron and Foreign Secretary William Hague’s ongoing negotiation on the terms of membership with German Chancellor Angela Merkel.

On this issue, as with many others, Westminster opinion does not represent the democratic will of all the constituent parts of the UK.  It seems likely that all major political parties with a chance of being in government after the 2015 Westminster election will commit to holding an EU referendum. This prospect of a dangerous, metropolitan media driven referendum on EU membership creates great uncertainty.

Scotland may no longer be part of the UK at the time of the EU poll and an independent Scotland’s approach to negotiating continued EU membership (which experts have said there will be an obligation to have after a Yes vote) will ensure continuity of membership and effect.  We note in particular the recent positive comments of No Campaign policy adviser Professor Jim Gallagher regarding an independent Scotland staying in Europe and its ability to successfully negotiate key opt outs.

Indeed, the Scottish people must now see that there is far more uncertainty over Scotland’s continued access to the common market if we vote to No in the independence referendum on September 18th this year.  A Yes vote is the only way to guarantee that Scottish based companies can continue to trade in a UK and European common market for the free movement of capital, goods, services, trade and people.”