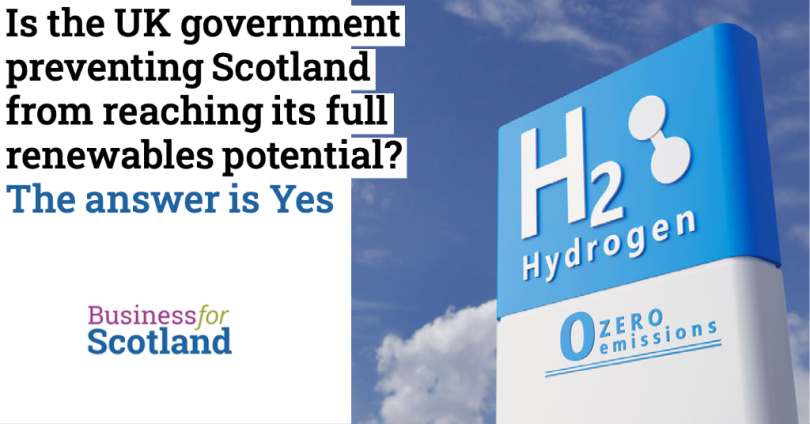 Scotland currently produces the most renewable energy per capita among the UK nations and is a potential global leader in this field.  Hydrogen in particular could represent Scotland’s greatest industrial opportunity since the discovery of oil and gas in the North Sea. The technology has the power to unleash huge economic benefits while supporting the transition to net zero.

But Scotland is being failed by the Westminster government in its transition to renewables, which leaves the question open: Is the UK government preventing Scotland from reaching its full potential?

The answer is yes – the UK Government has put in place unfair barriers to Scottish development and it has slipped on promises for vital funding. Here we set out five failures by the UK government.

It is critical that Scotland moves swiftly in order to cement its position as a renewable energy leader.  Scotland has the capability to deliver green hydrogen – produced by using renewable power such as wind –  at scale in a fairly quick timeline compared to other countries. A key project to create a connection from Scotland into the EU’s hydrogen backbone is vital.

But the Scottish government doesn’t have the power to regulate or manage the National Grid, which was privatised by the UK’s Conservative government in 1990. Progress will rely upon the UK government prioritising these changes to make it happen and that doesn’t look likely as it is focused on nuclear power in England.

Scottish energy secretary Michael Matheson said: “We see that as being a really critical element in helping to make sure that we don’t find ourselves in a situation where Scotland is a missing link in the hydrogen backbone in Europe given that we have the potential to be one of the biggest suppliers of it”.

Matheson warned that not being connected to the EU’s pipelines could see the price of Scottish green hydrogen driven up, making it less competitive against other nations. The Energy Secretary said: “We’ve made representations to the UK Government on the need to make sure that they prioritise exports from Scotland much higher in their thinking than it is today.”

The Scottish Energy Secretary Michael Matheson has also warned MPs there’s a risk investors may “withdraw” from the vital Acorn CCS project in Aberdeenshire as the UK Government fails to honour its promises on the timing of the next tranche of funding.

This project is a key driver of Scotland’s ability to harness its energy potential by creating environmentally responsible blue hydrogen, which along with green hydrogen, produced by excess renewable energy will boost production of this next-generation energy source.

Acorn, which is located at the St Fergus gas plant near Peterhead, is relying on government funding to help deliver an industrial-scale carbon capture and storage (CCS) development and create over 20,000 jobs in its first phase. But the Track 2 process – the next tranche of a £1bn CCS development fund from Westminster – has been delayed, having been expected last year.

Blue hydrogen is produced from natural gas co-located with carbon capture and storage (CCS) technologies that capture process emissions. Its environmental credentials depend on carbon capture and storage and so the Acorn project is integral to this path. It could have been up and running by the mid-2020s, but it was overlooked in the first tranche of funding, despite Aberdeen’s significance in terms of energy potential, a Scottish Affairs Committee meeting heard recently.

Another example of UK Government failure is the lack of necessary market incentives to build Scotland’s pumped storage hydro capacity. Once a world leader in hydropower, Scotland now lags behind countries like Norway.

The Scottish Government can give planning permission – but it doesn’t have the power to put in place the ‘contracts for difference’ that the private sector needs to build these facilities.

“We recognise the huge potential of pumped hydro storage power to play a significant role in our future energy system. The lack of an appropriate market mechanism from the UK Government is frustrating the realisation of this opportunity for significant economic investment,  job creation, and gigawatts of clean energy. Coire Glas, for example, represents over £1 billion in investment, with up to 1.5 Gw of capacity and 30 GWh of storage. The UK Government must take action to ensure that this potential is realised.”

The UK Government has resisted calls to create a level playing field for Scottish renewable producers, clinging to an outdated model conceived of at a time when distance from consumers was a greater source of cost than it should be nowadays.

The National Grid ESO has forecast that by 2025, average transmission charges will rise to £7.12 per MWh for the base case in Scotland, with charges in the north rising to nearly £10 per MWh. Meanwhile, tariffs in England and Wales are set to fall by over 80% to £0.08 per MWh.

#5 The UK Government is pouring resources into nuclear power

Another example of the way the two countries are diverging is that the UK is pouring resources into nuclear power, charging a nuclear levy which is estimated to cost £80 per household for this expensive and inefficient form of energy.

While the UK Government’s Energy Security Strategy, published last April, increased targets for nuclear generation and paved the way for a review of the fracking ban, the Scottish Government has stated that its position statements on nuclear and onshore oil and gas have not changed. Both technologies have a preferred policy position of no support.

Scotland doesn’t want or need nuclear power – yet Scots are forced to pour resources into it, instead of into the areas where Scotland needs investment, such as updating the grid.

Building on its recent hydrogen strategy, the Scottish government has laid out an energy strategy that prioritises an accelerated shift to increased wind and hydrogen development. The draft energy strategy, which is available for consultation for four months, offers the “fastest possible” transition away from oil and gas production.

Capitalising on the potential for Scotland to become a leading exporter of hydrogen alone could contribute between £5 billion and £25 billion a year to the economy by 2045, and the sector is seen as the best area to create jobs and opportunities for people from the fossil fuel sectors.

Scotland also needs more storage capacity to make the most of its huge renewable power capacity, a level playing field for renewables, and connectors to Europe. But the UK government holds too many important levers in terms of investment and regulation.

Scotland has seen how the potential of oil and gas was squandered. It has no sovereign wealth fund like Norway. Now the country has a second chance to become a world leader in energy – to harness the huge potential of natural resources, to meet climate goals and to boost the economy.

But the people are being forced to watch as a Westminster government with different priorities gives too little too late, sets regulatory priorities that don’t work for Scotland and lets free marketeers profit from the resources that should belong to the people.  Scotland needs independence – sooner rather than later – to make the most of its energy potential this time.