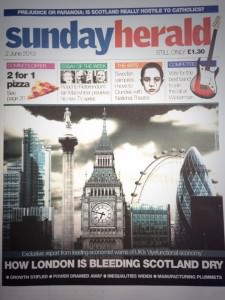 Business for Scotland’s research on Scotland’s economy has delivered solid proof that Scotland subsidises the UK, not the other way around.  Initially anti independence campaigners claimed we were wrong, we’ve since produced so much evidence they’ve since backed off.  That evidence clearly demonstrates Scotland has paid £64bn in interest on debt incurred by the rest of the UK, not Scotland.

Additionally the historical Government Expenditure and Revenue Scotland Reports (GERS) show that every year, for the last 32 years Scotland has generated more tax per head than the average for the UK. This quashes the oil volatility myth because a low oil price has never seen Scottish tax revenues, per head, go below that of the UK average. 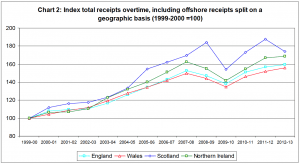 Having been forced to accept the reality of the situation the No Campaign then claimed Scotland’s stronger fiscal position was all to do with North Sea oil and that Scotland’s higher GDP and tax revenue per head has only existed since oil was discovered. So we have researched that too and guess what we found?

As well as Scotland’s current economic position and the potential for economic prosperity, through localised self governance (independence), I have always been interested in the history of economics.  My gut feeling has always been that the claim Scotland is historically subsidised by the UK just doesn’t make sense.

Prior to the de-industrialisation of Scotland by successive Westminster Governments, the nation was productive and, in particular, Glasgow was known as the “workshop of the world”. As Scotland and the UK lost its manufacturing sector Germany invested in small to medium sized manufactures – how did that work out?

Shipbuilding was amongst the key industries lost from Scotland under Westminster mismanagement. At one point in the early 1900s, a fifth of all ships in the world were made on the River Clyde in Glasgow. Before oil there was manufacturing and in particular heavy engineering to boost Scotland’s revenues.

A sharp eyed researcher spotted this archived article from the Telegraph in 1965 pointing out that the Church of Scotland in its annual report states that “Scots people should ask again to know more about their contribution to British revenue and the proportion of this taxation actually spent in Scotland.”

Its damming conclusion is that “A yearly drain from Scotland of between 20% and 25% of the total revenue raised in the country could scarcely have failed to have some influence on the level of Scottish unemployment, double that of England, and also on the continuous stream of Scottish emigration. During the last 13 years 345,000 people had left Scotland”.

These points demonstrate the massive drain on Scotland’s wealth, population and prosperity to England, a generation before oil was discovered.

The de-industrialisation of Scotland has left many communities, both rural and urban, without jobs and without hope. This deterioration accelerated rapidly as the UK focused on finances and allowing market forces to control economic policy, first under Margaret Thatcher but then even more so under consecutive New Labour Governments with their over-reliance on services, in particular financial services, in London and the South East of England.

Today without oil revenues, Scotland’s GDP (total wealth created) is almost identical to the UK’s. So Scotland’s GDP and revenues must have started far higher.  In the heyday of shipbuilding, Glasgow produced 25% of the world’s vessels. How can anyone suggest that Scotland didn’t have a higher GDP per head than the rest of the UK at that time?

Not just last year, not just for the last 32 years, not just for the last 70 years, but for much longer there is clear evidence of Scotland’s relative financial strength throughout the twentieth century. Scotland’s wealth subsidised investment in London and the South East to the detriment of the North. So much so that the “workshop of the world” became a country lacking in economic confidence. Is this not a case study in bad management and governance.

After a century of lost wealth as a result of distant, disinterested and often dysfunctional Westminster mismanagement, it is now time to invest in Scotland’s future. Put party politics to one side. Regardless of what colour of government Scotland votes after independence, one elected by the people, for the people, close to the people and with Scotland’s long-term rather than London’s short-term interests at heart we can and will create a more prosperous, fairer and confident Scotland.